Meditation May Protect Your Brain 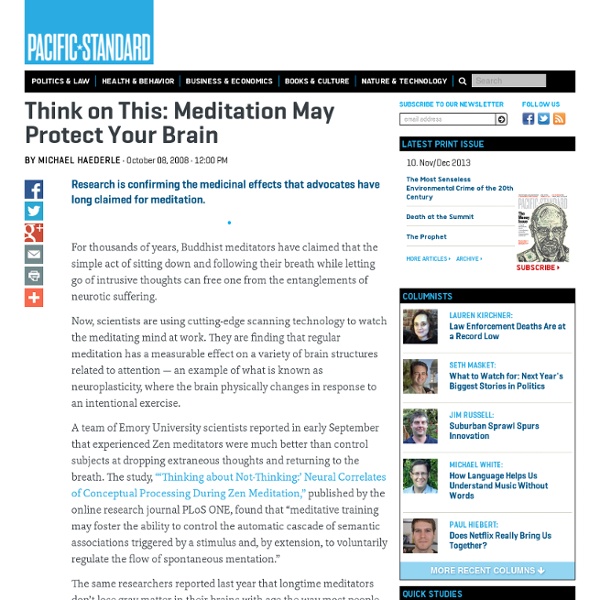 For thousands of years, Buddhist meditators have claimed that the simple act of sitting down and following their breath while letting go of intrusive thoughts can free one from the entanglements of neurotic suffering. Now, scientists are using cutting-edge scanning technology to watch the meditating mind at work. They are finding that regular meditation has a measurable effect on a variety of brain structures related to attention — an example of what is known as neuroplasticity, where the brain physically changes in response to an intentional exercise. A team of Emory University scientists reported in early September that experienced Zen meditators were much better than control subjects at dropping extraneous thoughts and returning to the breath. The same researchers reported last year that longtime meditators don’t lose gray matter in their brains with age the way most people do, suggesting that meditation may have a neuro-protective effect. Where does all this lead?

Six Steps to Meditation This meditation lasts 15 to 20 minutes. It is a meditation of SIX steps. Each step will take roughly two and half to about three minutes. Potent Serpent Meditation for Awakening Kundalini Shakti Serpent Meditation To Awaken Kundalini To practice this meditation follow the step by step instructions below. Please do not overdo any Kundalini Meditation. Start off slowly and then build up your time systematically over time. Making a dream date - Dream Gates "At the Foothills of Mt Helen". B.K.Connelly, 1981 You’re separated from your sweetheart and you’d like to have some good private time together. Can you do that?

A Yoga Move That Boosts Your Energy If you need an energy infusion, try the Camel Pose. It opens your chest so your lungs are able to take in more oxygen. Plus, the act of bending backward is believed to stimulate your adrenal glands, revving you up. Do this move a few times a week—or whenever you need a little lift. Sound Meditation Sound Meditation The benefits of meditating on sounds are the opening of more pathways within the brain. Any sounds can be used for this meditation. This includes any kind of music. Close your eyes and relax. Open your mind and try to 'see' the sounds. What Is A Dreamwalker? What is a Dreamwalker? dreamwalker shapeshifter skinwalker shaman shapeshifter story medicine wheel what is a mystic For an example of dreamwalking through Yoga techniques go to six yogas This page is about defining terms.

The Five Tibetan Rites - Excercises for Healing By Mary Kurus Copyright Mary Kurus 2001, All Rights Reserved Background In 1985 a book called The Ancient Secret of the Fountain of Youth written by Peter Kelder was published which for the first time fully described an exercise program for "youthing". Meditating on Your Clairvoyance Points Meditating on Your Clairvoyance Points After meditating on your 3rd eye, visualize your 3rd eye brightening and shining outward like the sun and direct this energy to each of your psychic eyes, beginning with your 1st and 2nd psychic eyes and back to your third eye and up through your 4th, 5th and 6th eye points. You can then circulate the energy up and down as a stream of brilliant light. Another technique which is somewhat advanced is to perform the chakra breathing through each of the centers. Draw energy into either one specific center at a time or do all simultaneously with each inhale.

Penn study shows why sleep is needed to form memories PHILADELPHIA – If you ever argued with your mother when she told you to get some sleep after studying for an exam instead of pulling an all-nighter, you owe her an apology, because it turns out she's right. And now, scientists are beginning to understand why. In research published this week in Neuron, Marcos Frank, PhD, Assistant Professor of Neuroscience, at the University of Pennsylvania School of Medicine, postdoctoral researcher Sara Aton, PhD, and colleagues describe for the first time how cellular changes in the sleeping brain promote the formation of memories. "This is the first real direct insight into how the brain, on a cellular level, changes the strength of its connections during sleep," Frank says.

Opening and Meditating on Your Clairaudience Points Meditating on your centers of clairaudience; also known as "psychic hearing" will empower your astral hearing. This is useful when communicating with Demons. Just relax and focus on each center, visualizing each one as a bright star. EWLD6 [From: S. LaBerge & H. Rheingold, (1990). EXPLORING THE WORLD OF LUCID DREAMING. New York: Ballantine.

Meditation - Its not what you think It seems everyone is interested in meditation...talking about the wonderful benefits, recommending classes and discussing the different ways to "do it". But, for a beginner, just what is "it"? And how do you do "it"?