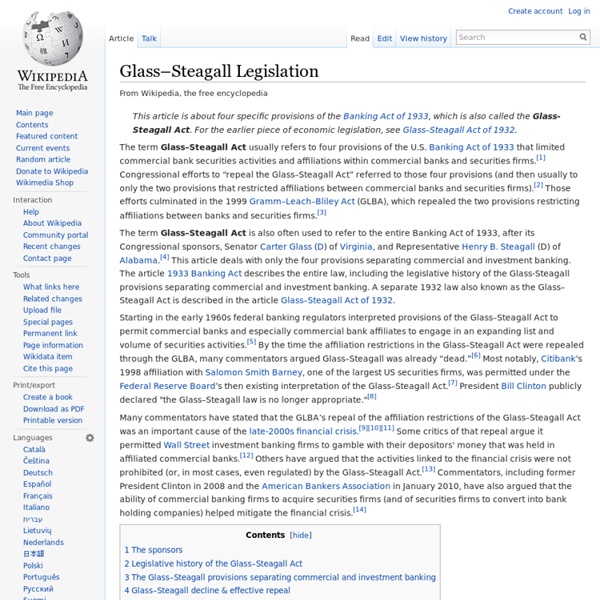 The term Glass–Steagall Act usually refers to four provisions of the U.S. Banking Act of 1933 that limited commercial bank securities activities and affiliations within commercial banks and securities firms.[1] Congressional efforts to “repeal the Glass–Steagall Act” referred to those four provisions (and then usually to only the two provisions that restricted affiliations between commercial banks and securities firms).[2] Those efforts culminated in the 1999 Gramm–Leach–Bliley Act (GLBA), which repealed the two provisions restricting affiliations between banks and securities firms.[3] [edit] The sponsors of both the Banking Act of 1933 and the Glass-Steagall Act of 1932 were southern Democrats: Senator Carter Glass of Virginia (who in 1932 had been in the House, Secretary of the Treasury, or in the Senate, for the preceding 30 years), and Representative Henry B. Steagall of Alabama (who had been in the House for the preceding 17 years). Legislative history of the Glass–Steagall Act[edit] Related:  Great Depression

Richest 1% may own half of global wealth by 2016 The combined wealth of the world's richest 1 percent could overtake that of the other 99 percent by 2016 , according to a report by Oxfam published Monday, as billionaires, politicians and business leaders gather in Davos for the annual World Economic Forum. In a study called "Wealth: Having it all and wanting more." the international charity warned that a sharp rise in inequality was holding back the fight against global poverty at a time when 1 in 9 people do not have enough to eat and more than a billion people live on less than $1.25 a day. © Provided by CNBC Of the remaining 52 percent of global wealth in 2014 , about 46 percent was owned by the rest of the richest fifth of the world's population. The other 80 percent of the world share d around 5.5 percent, according to Oxfam. Rising inequality has moved into the spotlight in recent years amid concerns that living standards have been hit by slow economic recovery in the wake of the global financial crisis.

Drought may soon yield mysterious WWII-era bomber beneath Lake Mead Water levels are at their lowest at Nevada's Lake Mead leading the National Park Sevice to allow permits for recreational diving at the site of a downed B-29 bomber. (National Park Service) The drought that has parched much of the southwest may soon yield a mystery that has rested at the bottom of Nevada's Lake Mead for nearly 70 years, a B-29 bomber that went down carrying a top-secret missile defense system that may have actually caused the crash. The B-29 bomber, also known as the "Superfortress" and the same model as the storied Enola Gay and Bockscar, the planes that dropped atomic bombs on Japan, crashed in 1948 as it flew over the giant lake testing a sun-powered missile guidance system. For decades, it lay at a depth of 300 feet in the man-made lake that was formed by construction of the Hoover Dam. "There's a lot of history there. "It would be amazing," Curtis Snaper, of Sin City Scuba in nearby Las Vegas, told FoxNews.com.

Sixteenth Amendment to the United States Constitution The Sixteenth Amendment (Amendment XVI) to the United States Constitution allows the Congress to levy an income tax without apportioning it among the states or basing it on the United States Census. This amendment exempted income taxes from the constitutional requirements regarding direct taxes, after income taxes on rents, dividends, and interest were ruled to be direct taxes in the court case of Pollock v. Farmers' Loan & Trust Co. (1895). The amendment was adopted on February 3, 1913. Text The Congress shall have power to lay and collect taxes on incomes, from whatever source derived, without apportionment among the several States, and without regard to any census or enumeration. Other Constitutional provisions regarding taxes Article I, Section 2, Clause 3: Representatives and direct taxes shall be apportioned among the several States which may be included within this Union, according to their respective Numbers...[1] Article I, Section 8, Clause 1: Article I, Section 9, Clause 4: Adoption

Congress could soon allow pension plans to cut benefits for current retirees Congress could soon allow the benefits of current retirees to be cut as part of an agreement to address the fiscal distress confronting some of the nation’s 1,400 multi-employer pension plans. Several unions and pension advocates opposing the move, which would be unprecedented, say that permitting financially strapped plans to cut retiree benefits would violate the central promise of traditional pensions: that they would provide a defined benefit for life. “This proposal would devastate retirees and their surviving spouses,” said Karen Friedman, executive vice president of the Pension Rights Center, a nonprofit group. “The proposal would also torpedo basic protections of the federal private pension law . . . that states that once benefits are earned, they can’t be cut back.” Several of the nation’s large multi-employer pension plans are on a course that would leave them insolvent within a decade. In recent weeks, negotiations over the proposal have heated up on Capitol Hill. Michael A.

Clinton has received $16 million in post-presidency benefits March 7, 2015: Former President Bill Clinton speaks at the Future of Energy session at a university conference sponsored by the Clinton Global Initiative in Coral Gables, Fla. (AP) Former President Bill Clinton has received nearly $16 million in taxpayer funds since leaving the White House, covering everything from his pension to personnel to benefits -- and renewing questions over how much taxpayers really should spend on ex-presidents who make millions after leaving office. A new Politico report and analysis examined the payments since he left office in 2001, and claimed it amounts to more than any other ex-president has received. Meanwhile, Politico points out, Clinton has a personal annual income that beats all the other living former presidents. His $15 million advance -- then a record -- for his 2008 memoir was just a sliver of his earnings. From 2001 to 2014 Clinton has received a roughly $200,000 annual pension (all presidents received the same level of pension in 2014).

How Walmart's Bosses Get Rich Off Welfare Abuse | Carl Gibson Forget about the guy at the grocery store using food stamps to buy lobster. Walmart, the world's largest retail company, is even more dependent on government welfare so it can make jaw-droppingly obscene profits. In fact, government handouts are the main reason Walmart is so profitable, and the billion-dollar corporation's business model is centered around the continued dependence on social safety net programs. Paying Workers Poverty Wages When Walmart pays its workers so little that they need food stamps to survive, they're also investing in a steady profit stream. Employee wages are so low that during the last holiday season, one Walmart in Ohio held a food drive for its own employees so they could have a decent Thanksgiving dinner. Walmart's insistence on paying its workers so little is especially despicable, given that the company could pay workers much more without even changing any of its prices. Excessively Compensating Executives

How the GOP Became the Party of the Rich | Politics News The nation is still recovering from a crushing recession that sent unemployment hovering above nine percent for two straight years. The president, mindful of soaring deficits, is pushing bold action to shore up the nation's balance sheet. Cloaking himself in the language of class warfare, he calls on a hostile Congress to end wasteful tax breaks for the rich. "We're going to close the unproductive tax loopholes that allow some of the truly wealthy to avoid paying their fair share," he thunders to a crowd in Georgia. Such tax loopholes, he adds, "sometimes made it possible for millionaires to pay nothing, while a bus driver was paying 10 percent of his salary – and that's crazy." Preacherlike, the president draws the crowd into a call-and-response. The crowd, sounding every bit like the protesters from Occupy Wall Street, roars back: "MORE!" The year was 1985. Today's Republican Party may revere Reagan as the patron saint of low taxation. Then something strange happened.