There's a Better Way to Solve Your Problems. It's easy to become rigidly fixed within a view of who you are (“This is just the way I am”), and to become unable to envision possibilities for expanding your personal capacities, thinking, and emotions outside of that fixed view. 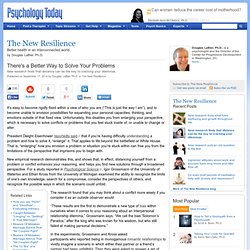 Unfortunately, this disables you from enlarging your perspective, which is necessary to solve conflicts or problems that you feel stuck inside of, or unable to change or alter. President Dwight Eisenhower reportedly said that if you’re having difficulty understanding a problem and how to solve it, “enlarge” it. That applies to life beyond the battlefield or White House. That is, “enlarging” how you envision a problem or situation you’re stuck within can free you from the limitations of the perspective that imprisons you to begin with. New empirical research demonstrates this, and shows that, in effect, distancing yourself from a problem or conflict enhances your reasoning, and helps you find new solutions through a broadened perspective. A brief history of melancholy - Courtney Stephens. The Science of Depression.

Why Words Can Hurt at Least as Much as Sticks and Stones. Jose AS Reyes/Shutterstock Just as the digital age has ushered in new ways of enhancing human connection, it’s also opened up the scope and range of social rejection. 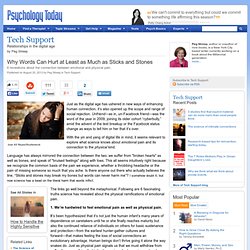 Unfriend—as in, un-Facebook friend—was the word of the year in 2009, joining its older cohort “cyberbully,” amid the advent of the text breakup or the Facebook status change as ways to tell him or her that it’s over. With the yin and yang of digital life in mind, it seems relevant to explore what science knows about emotional pain and its connection to the physical kind. Language has always mirrored the connection between the two; we suffer from "broken hearts" as well as bones, and speak of "bruised feelings" along with toes. This all seems intuitively right because we recognize the common basis of the pain we experience, whether a throbbing headache or the pain of missing someone so much that you ache. The links go well beyond the metaphorical. 1. 2. For example, Naomi L. 3. We all know this, despite the adage. 4. 5. 6. Bad Stuff Got You Down? 6 Things You Need to Know. At a glance, this doesn’t seem very useful in the 21st century since you and I know better than to pick our own fungi and are unlikely to encounter a wild animal on the way to our office or home. 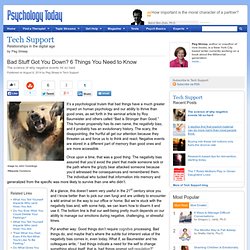 But we’re stuck with the negativity bias and, with some help, we can learn how to disarm it and use it. The bottom line is that our well-being pretty much depends on our ability to manage our emotions during negative, challenging, or stressful times. Put another way: Good things don’t require cognitive processing. Bad things do, and maybe that’s where the subtle but inherent value of the negativity bias comes in, even today. What if, as Baumeister and his colleagues write, “ bad things indicate a need for the self to change something about itself: that is, bad things prompt self-regulation?” Stress Is Not Our Enemy Until We Think It Is.

Kelly McGonigal, PhD, health psychologist at Stanford University gave a riveting TED talk which should be receiving far more recognition than it is because it merges science and the power of belief and directly relates these findings to the impact of stress in our lives. 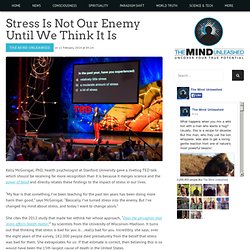 “My fear is that something I’ve been teaching for the past ten years has been doing more harm than good,” says McGonigal. “Basically, I’ve turned stress into the enemy. But I’ve changed my mind about stress, and today I want to change yours.” She cites the 2012 study that made her rethink her whole approach, “Does the perception that stress affects health matter?” By scientists from the University of Wisconsin-Madison. McGonigal cites another 2012 paper, “Improving Acute Stress Responses: The Power of Reappraisal,” published by scientists at Harvard’s department of psychology, and asks what might happen if we change the way we think about stress.

Sources/credits: ted.com Prevent Disease. 9 Things Only People With Depression Can Truly Understand. There’s been a lot of dialogue surrounding depression — particularly in light of recent events — as people struggle to understand why and how it affects people in the ways that it does. 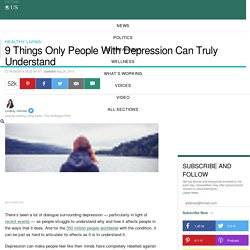 And for the 350 million people worldwide with the condition, it can be just as hard to articulate its effects as it is to understand it. Depression can make people feel like their minds have completely rebelled against them. From a lack of will to physical pain, it can cause people to function poorly at work, in school and in social activities, according to the World Health Organization. Many people who experience depression can also experience symptoms of anxiety. How the depressed brain changes after psychotherapy.

By Lauren Sakowski The struggle with depression involves more than long-term bouts of sadness, helplessness, and hopelessness. 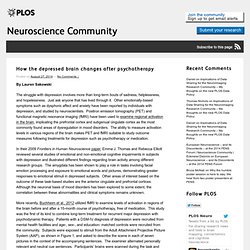 Just ask anyone that has lived through it. Other emotionally-based symptoms such as dysphoric affect and anxiety have been reported by individuals with depression, and studied by neuroscientists.