The Fine Arts Conservancy. The comparative extent of damage described by the following adjectives: Negligible: Insignificant damage that may not need immediate attention but needs to be monitored. 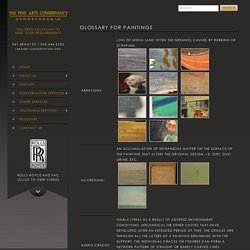 Marked: Readily identified damage, often with distinctive features and requires remediation by a conservator. Major: Damages or existing condition are noticeable, if not conspicuous in extent; stability of the work is in question, often great risk is a factor. Extreme: Most severe damage or existing condition has become very advanced. It is important to understand that damage to a work of art is rarely static and the work will continue to deteriorate.

Cultural Institute. Craquelure. Craquelure in the Mona Lisa, with a typical "Italian" pattern of small rectangular blocks Typical French craquelure in a portrait of c. 1750, larger and less regular patterns, with curving cracks Age craquelure in pottery Grain jar from Vietnam, Thanh Hoa, 11th-12th century, porcelain with deliberate crackle glaze Pair of Chinese crackled glaze jars with French ormolu mounts, both 18th century Craquelure in fossilized hyena tooth Craquelure (French: craquelé, Italian: crettatura) is the fine pattern of dense "cracking" formed on the surface of materials, either as part of the process of ageing or of their original formation or production. 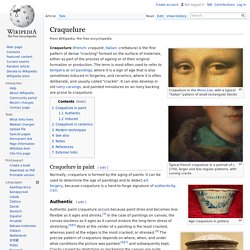 Craquelure in paint[edit] Normally, craquelure is formed by the aging of paints. Authentic[edit] Italian - usually perpendicular to the grain of the panel Flemish - usually ordered network Dutch - usually connected network French - usually curved cracks Italian - can have small to large islands Induced[edit] The Science of Vision and the Emergence of Art. Detailed pigment histories, recipes.

Colour in Painting: Theory, Practice, Pigments. Red Red (the word derives from Old English "Read" and the Indo European root "reudh-") is one of the additive primary colours of light, complementary to cyan, in RGB (Red, Green, Blue) colour systems. 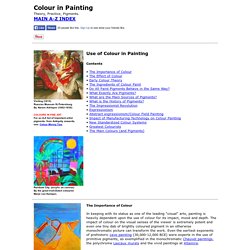 In addition, Red is one of the subtractive primary colours of RYB (Red, Yellow, Blue) colour space. Making Artists Paint In The Studio By Tony Johansen. Making Purple: The Science of Art. Making Green: Tempera versus Oil. An introduction to the materials and construction of easel paintings. Paintings are made of organic and inorganic materials which are put together by an artist to create a specific image. 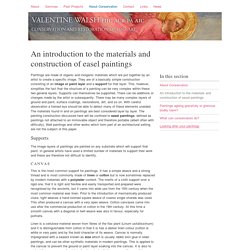 They are of a basically simple construction consisting of an image or paint layer and a support for that layer. This, however, simplifies the fact that the structure of a painting can be very complex within these two general layers. Supports can themselves be supported. There can be additions or changes made by the artist or subsequently. Paintings conservation, Liverpool museums.

© chris@mikami.co.uk In the paintings conservation studio we look after National Museums Liverpool's varied collections, which range from well known old masters and Victorian works to a growing collection of contemporary paintings. 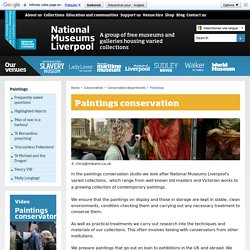 We ensure that the paintings on display and those in storage are kept in stable, clean environments, condition checking them and carrying out any necessary treatment to conserve them. As well as practical treatments we carry out research into the techniques and materials of our collections. This often involves liaising with conservators from other institutions. We prepare paintings that go out on loan to exhibitions in the UK and abroad. Further information Recent projects Follow the links below to find out more about some of the fascinating discoveries we've made about these paintings: Contact the department. Welcome to Tate on Khan Academy. Welcome to Tate on Khan Academy, where you can learn about art and artists in the Tate galleries and beyond. 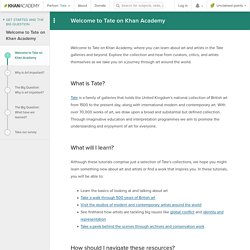 Explore the collection and hear from curators, critics, and artists themselves as we take you on a journey through art around the world. Tate is a family of galleries that holds the United Kingdom's national collection of British art from 1500 to the present day, along with international modern and contemporary art. With over 70,000 works of art, we draw upon a broad and substantial but defined collection. Through imaginative education and interpretation programmes we aim to promote the understanding and enjoyment of art for everyone. Canvas and ground. Canvas is a strong woven fabric, which can be made from linen, cotton, and other materials such as jute or hemp. 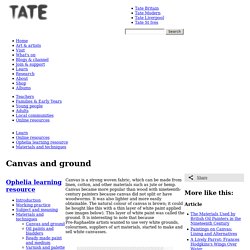 Canvas became more popular than wood with nineteenth-century painters because canvas did not split or have woodworms. It was also lighter and more easily obtainable. The natural colour of canvas is brown; it could be bought like this with a thin layer of white paint applied (see images below). This layer of white paint was called the ground. It is interesting to note that because Pre-Raphaelite artists wanted to use very white grounds, colourmen, suppliers of art materials, started to make and sell white canvasses. Millais bought two pieces of canvas (76.2 x 111.8 cm) for Ophelia from the colourman Mr Charles Roberson on 7 June 1851 for 15 shillings (equivalent to £47 today).

Both canvasses were primed. It is possible that at the beginning of each day Millais would mark out the area to be painted that day by covering it with white paint.