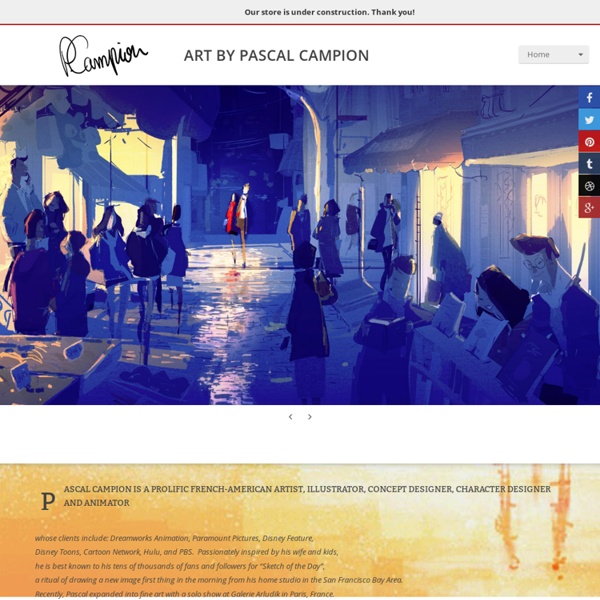 Aaron's Art Tips Archives - The Art of Aaron Blaise As a chance to experiment with my new Hair Brushes Volume 2 Set and in honor of “May the 4th” I thought it might be fun to do a quick speed painting of one of my favorite characters. Enjoy! Continue reading Sayaka Ouhito Japanese artist Sayaka Ouhito is an illustrator, and perhaps a concept artist. I’m unsure about the latter as I can’t read Japanese and, save for this relatively uninformative interview, there seems to be very little information available about her in English. Other than that, I know little about her, just my own impressions of the delightful drawing and Miyazaki-like charm that make her work so appealing.

Romantic Cityscape painter Chien Chung-Wei 簡忠威aimed to be a painter at age 10. He earned the master degree in Fine Arts, National Taiwan Normal University and was selected as one of the 30 painters in One Hundred Years of Watercolor in Taiwan in 2009. In 2010, he set up the world’s first live demonstration teaching system in Chung-Wei Chien’s Art Studio for teaching watercolor. In 2014, he was selected in the 147th AWS Annual International Exhibition and the 94th NWS Annual International Exhibition; which made him the first Taiwanese painter get selected in the AWS and NWS annual exhibition. In addition, he was also accepted as the signature member in NWS in the same year.

Raphael Lacoste Raphael Lacoste is an illustrator, visual development artist and art director for the gaming and film industries. He is currently working with Ubisoft as Brand Art Director for the Assasin’s Creed franchise, which is noted for its beautiful environments. Lacoste’s other gaming credits include: Prince of Persia: The sands of Time and Prince of Persia: The Two Thrones. He has also worked as a matte painter and designer for feature films like Terminator: Salvation, Journey to the Center of the Earth, Jupiter Ascending and Repo Men. Lacoste’s website features galleries of his work in several areas. He works digitally, primarily in Photoshop, and his images make beautiful use of atmospheric perspective and severely limited palettes.

Новая G-Shock телефон на CES 2012 Casio has unveiled a new G-Shock cellphone at CES 2012. This new G-Shock-tough phone is rated for a 10 foot (3 meters) high drop impact, 1 ATM (10 meters) waterproof depth and it can hold up to one ton of weight. It has a chunky design that looks like they wrapped a resin G bezel around the edge of the phone. katsuyoshi koya Today is not exactly a translation, but it does have to do with the Fire Emblem 25th Anniversary book. The book features five special illustrations that have Marth, Sigurd, Eliwood, Ike, and Lucina, each drawn by the same character artists in charge of their respective games. You may view them on the book’s compilation post here, but I wanted to make individual pages for each one, too. So, today, I provide Katsuyoshi Koya (character designer in Mystery of the Emblem and Genealogy of the Holy War)’s artwork of Sigurd. I went out of my way to clean it up for people who wanted the artwork.

Concept Art World Jonas De Ro is a concept artist and illustrator currently living and working in London. Jonas has worked on feature films such as Edge of Tomorrow, Guardians of the Galaxy, Jupiter Ascending, Cinderella, The Jungle Book and Batman v Superman: Dawn of Justice. Link: www.jonasdero.com | Twitter All images used with permission by the artist. © Jonas De Ro or their respective copyright holder. Paperpokés - Pokémon Papercraft: BLASTOISE 009 / BLASTOISE - Pokémon PapercraftName: Blastoise Type: Water Species: Shellfish Pokémon Height: 1.6 m (5'03") Weight: 85.5 kg (188.5 lbs.) Interesting Facts: Blastoise is a large, bipedal, blue tortoise-like Pokémon with a tough brown shell and two powerful water cannons, which are like steel in appearance, that jut out of the top sides of its shell. The cannons can be withdrawn inside the shell, or rotated to point backwards; this enables Blastoise to commence jet assisted rams. THE PAPER MODEL Height: 15.9 cm/ 6.3 in Width: 22.2 cm/ 8.7 in Depth: 23.5 cm/ 9.3 in Pages: 7 Pieces: 55 Level: Medium Designer: Brandon Photo: LuIS NOTES: This one is moderately easy, just follow the numbers and included instructions. Download: A4 / Letter

Graeme McCormack Graeme McCormack is a freelance concept artist and illustrator currently based in Vancouver, British Columbia. He attended the Alberta College of Art + Design. He recently finished working in at Sequence Post on a number of undisclosed projects, a previous project of theirs was contributing work on Halo 4. Link: www.wizardsandunicorns.com | Instagram | Tumblr