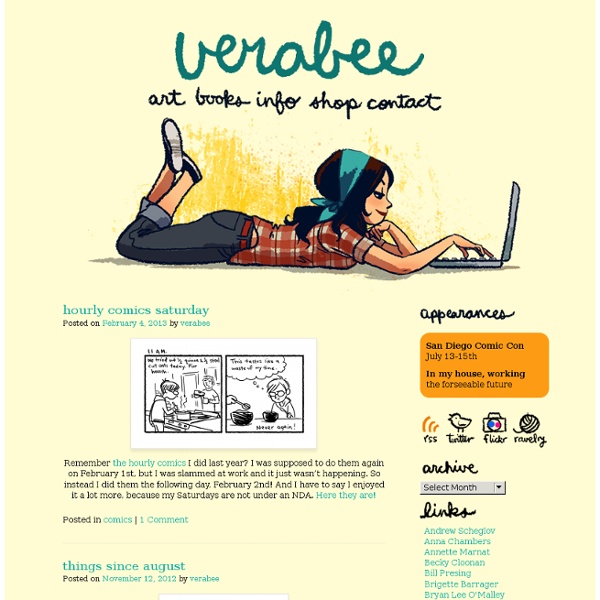 San Diego is upon us! July 18-21st. This year I’ll be there as a Special Guest, which means there are going to be a bunch of places to see me. Thursday July 18th 10:oo am – TR!CKST3R Symposia #1: Personal Experience: Putting YOU into your project

Marguerite Sauvage A bouquet of personnal works for Exquise Exhibition Paris about feminity in women artists work. These illustrations were also exhibited by Nucleus Gallery, USA.Fashion, Fine Arts, Illustration2012 Meg Park - Sketch Blog I really wanted to include more jungle creatures in my student film. Unfortunately, massive time constraints and the fact that the story didn't really call for it meant that I had to scrap the idea. Maybe this is what they could've looked like! I made these in Adobe Illustrator. I use it constantly at work, but I don't use it much it for my personal things. List of webcomics This list of notable webcomics includes comics which are (or were) primarily published on the Internet. It is organized chronologically by the comics' start dates. The dates shown after a name relate to the period during which the comic began appearing and, in the case of defunct comics, finished appearing.

Aron Draws Hi there, and thank you so very much! The internet is pretty dang amazing. I first met my best friend Kyle online, and he taught me a whole lot! It’s pretty amazing for me to think I might not have met him or any of my other wonderful friends (or moved out here to Burbank) if it hadn’t been for the internet. I learn a lot from people online, I get to help out a lot of people online, and the internet helped my work get seen and it’s how I got offered a job at Disney. Classic Movie and TV Characters Reimagined as Cartoons Here's a great collection of pop art, created by artist Justin White, featuring several characters and scenes from classic movies and TV series reimagined as cartoons. These illustrations are a part of White's first solo art show, called Rated G, taking place at Gallery 1988 Melrose in Los Angeles this Friday. I'm sure you'll recognize most, if not all, of the films and shows represented here. I've included 13 of my favorite pieces from the show, but you can head on over to /Film to see many more of them.

Panasonic Lumix DMC-LX3 Review: 1. Introduction Camera based on a production LX3 with V1.0 firmware (White balance section updated to reflect V1.1 performance) Panasonic's LX series has always been home to the company's most ambitious compacts, offering a range of photographer-friendly features in a small, stylish and solid body festooned with external controls. It's been two years since the launch of the LX2 and the market has changed a lot in that time - the level of features offered even on inexpensive models has grown and the cost of all cameras, particularly DSLRs, has fallen drastically. Both of these trends risk reducing the potential market for premium compacts if their features are available on cheaper compacts, and much better photographic tools (in terms of flexibility of purpose and image quality) are available for only a little more money. And Panasonic seems fully aware of these challenges. Headline features

Awesome Series of STAR WARS Disney Mashup Art Artist James Silvan has created this fantastic series of Disney-inspired Star Wars art celebrating the Disney and Lucasfilm merger. The art includes Belle and Beast as Leia and Han (and Leia and Chewy), Dumbo as an X-Wing, Timon and Pumbaa as R2-D2 and C3PO, Donald Duck as General Grievous, Lilo and Stitch as Luke and Leia, and a couple more fun designs! iTunes Movie Trailers iTunes Movie Trailers Poster ViewText View Previous Next More in Trailers: Trailers on Twitter Comment, suggestion, or have a film trailer?

a fun little journal about things we enjoy or do This gallery contains 5 photos. I had the pleasure of being asked to assist on Big Fish’s Fairway Solitaire game. We had two big themes coming up, Mexican Independence Day, Sept. 16th, and Talk Like a Pirate Day. The background art already existed. What I … Continue reading The Blog of Author Tim Ferriss “Everyone’s looking for rules to follow, and the sooner you realize there aren’t any, the better art can be.”– Jerrod Carmichael Jerrod Carmichael is pushing the boundaries of comedy with his groundbreaking work in stand-up, television, and film. Now just 29 years old, what this driven North Carolina native has accomplished is mind-boggling, and 2017 is going to be his biggest year yet. Jerrod stars in the hit NBC series The Carmichael Show, which he also writes and executive produces.

Feeling Just Peachy Today followtherubberduck asked: Hi~! I love your blog and the way you draw , its awesome~!So i would like to express a selfish desire of mine if you don't mind.