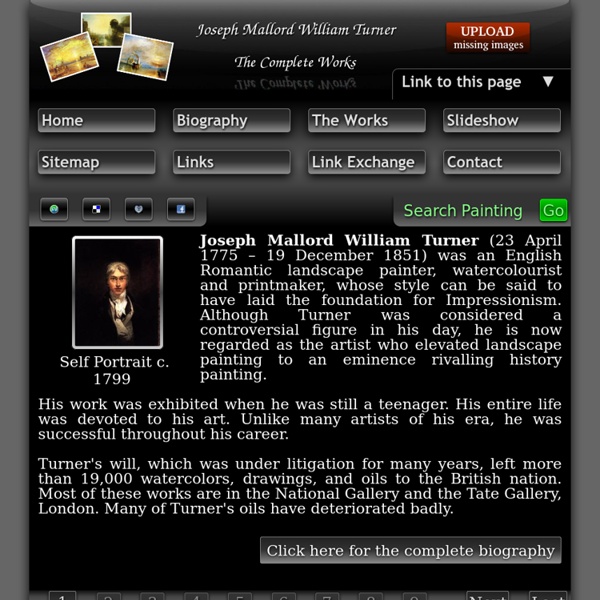 Joseph Mallord William Turner (23 April 1775 – 19 December 1851) was an English Romantic landscape painter, watercolourist and printmaker, whose style can be said to have laid the foundation for Impressionism. Although Turner was considered a controversial figure in his day, he is now regarded as the artist who elevated landscape painting to an eminence rivalling history painting. His work was exhibited when he was still a teenager. His entire life was devoted to his art. Unlike many artists of his era, he was successful throughout his career. Turner's will, which was under litigation for many years, left more than 19,000 watercolors, drawings, and oils to the British nation.

Statement — John Edmark If change is the only constant in nature, it is written in the language of geometry. Much of my work celebrates the patterns underlying space and growth. Through kinetic sculptures and transformable objects, I strive to give viewers access to the surprising structures hidden within apparently amorphous space. While art is often a vehicle for fantasy, my work is an invitation to plunge deeper into our own world and discover just how astonishing it can be. The Painter in Oil An old brush that has been properly cared for is generally better than a new one. It seems to have accommodated itself to your way of painting, and falls in with your peculiarities. It is astonishing how attached you get to your favorite brushes, and how loath you are to finally give them up. What if you have no others to take their places?

Jeff Wall Biography Jeff Wall is a leading contemporary Canadian photographer. Working within a Conceptual practice, Wall is concerned with ideas about the nature of images, representation, and memory. His large-scale photographs appropriate the visual language of advertising in their use of backlit transparencies, offering “cinematographic” recreations of small moments that the artist has witnessed in his everyday life.

Banksy's Brexit mural to be torn down and sold for £1m in 'second chance' for family Banksy’s Brexit mural is to be torn down and sold for £1m after the mysterious street artist targeted a family property empire for the second time. The mural, which shows a workman chiselling a star way from the EU flag, appeared on the side of an abandoned amusement arcade near Dover’s ferry terminal on Sunday. The Godden family are reportedly set to sell the mural, having lost a High Court battle to sell another piece by the artist on a property in Folkestone three years ago. According to the Telegraph, Jeremy and Jordan Godden have hired Robin Barton, who runs the Bankrobber Gallery in Mayfair, to sell the artwork for £1m. artwork by lawrence yang *UPDATE* - I've been working on a new site so haven't been keeping this up to date -- in the meantime if you'd like to see my latest work, please find me on Facebook, Twitter, or Instagram. And as always, you can email me with any questions! Thanks, Lawrence Prices for original work ranges from $200 to $1000. Please email me for more details.

Vladimir Tatlin Biography, Art, and Analysis of Works Vladimir Tatlin was central to the birth of Russian Constructivism. Often described as a "laboratory Constructivist," he took lessons learned from Pablo Picasso's Cubist reliefs and Russian Futurism, and began creating objects that sometimes seem poised between sculpture and architecture. Initially trained as an icon painter, he soon abandoned the traditionally pictorial concerns of painting and instead concentrated on the possibilities inherent in the materials he used - often metal, glass, and wood. He wanted above all to bend art to modern purposes and, ultimately, to tasks suited to the goals of Russia's Communist revolution. He is remembered most for his Monument to the Third International (1919-20). A design for the Communist International headquarters, it was realized as a model but never built.

Massive Whale Sculpture By Adrián Villar Rojas Warns of a Species Under Threat Adrián Villar Rojas's representation of a whale in the Patagonian forest is haunting My Family Dead looks eerily real The statue is located outside of Ushuaia, Argentina Adrián Villar Rojas working in his studio Artist Takes Every Drug Known to Man, Draws Self Portraits After Each Use This is all kinds of cool, and everything your mother told you not to do. Bryan Lewis Saunders is an artist from Washington D.C., not just any artist though. Saunders prefers to take a more unconventional approach to his artwork. Arguably his most interesting project, entitled DRUGS is described as follows:

The Embroidered Secrets of Maurizio Anzeri >> As long as something creates a reaction it’s alive << says Maurizio Anzeri, the Italian born artist from the city of Loano. Known for his series of eerie portraits or photo-sculptures, a term used by himself to describe his portraits, Maurizio’s work will be presented this month at the Baltic (25 June - 11 October 2011) and will mark his first solo show in a major UK institution. Yatzer caught up with Maurizio Anzeri and discovered the man behind the embroidered vintage photographs who is enjoying an extraordinary moment in his career. Richard Dadd: Masterpieces of the asylum - Features - Art So when he started behaving erratically in the last leg of the 10-month trip, his increasingly bizarre behaviour and the outlandish assertion that he was acting under the influence of the Egyptian god Osiris was dismissed as an acute case of sunstroke. We now know it was the start of delusional episodes and psychotic behaviour that culminated in murder on 29 August 1843, when he lured his father, Robert Dadd, to a park in Kent, and stabbed him to death. He fled by boat to France, in such a confused and manic state that he later said he was on his way to assassinate Ferdinand I, Emperor of Austria. He was arrested after attacking a French passenger with a razor and brought back to England. It was this troubled night, on 30 August 1843, that was to be his last as a free man. He spent the rest of his years incarcerated, until his death in 1886.

Victor Hugo - Author, Poet, Playwright Victor Hugo is a celebrated French Romantic author best known for his poetry and his novels, including Les Misérables. Synopsis Victor Hugo was born on February 26, 1802, in Besançon, France. After training as a lawyer, Hugo embarked on the literary career. He became one of the most important French Romantic poets, novelists and dramatists of his time, having assembled a massive body of work while living in Paris, Brussels and the Channel Islands. Hugo died on May 22, 1885, in Paris.