Everyone Is Miserable: Here’s What We Can Do About It - Fast Company - Pocket. How Your Phone Can Keep You from Getting Depressed – NEO.LIFE. Early in her career, when she was a junior researcher building artificial intelligence systems at the MIT Media Lab, Rosalind Picard was unsure what to do with data she encountered on the impact of emotions on human perception and cognition. 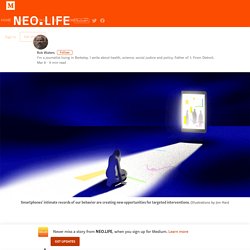 The findings were compelling — but they also made her uneasy. Bringing up the “e-word” as a serious research topic, she says, was “a great way to end your career” — and she was trying to get tenure, Picard told me. “I kept bumping into all these roles emotion was playing and trying to figure out how to fit that into my mathematical models of the brain. And I did not want to jump into that because I was a woman in science.” Nevertheless, she persisted, writing a “thought piece” that she circulated among colleagues at the Media Lab, arguing that building truly intelligent machines required insights about the role of emotions and feelings.

Long-Term Depression May Boost Stroke Risk Long After Mood Improves. Medical researchers have known for several years that there is some sort of link between long-term depression and an increased risk of stroke. 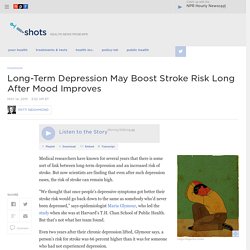 But now scientists are finding that even after such depression eases, the risk of stroke can remain high. "We thought that once people's depressive symptoms got better their stroke risk would go back down to the same as somebody who'd never been depressed," says epidemiologist Maria Glymour, who led the study when she was at Harvard's T.H. Chan School of Public Health. Five Lessons I Learned From Dealing with Depression. Positive Quotes About Life - Inspirational Life Quotes To Live By. The Art of Happiness: A Guide to Developing Life's Most Important Skill - Kindle edition by Matthieu Ricard. Religion & Spirituality Kindle eBooks @ Amazon.com. Mindfulness: A practical guide to finding peace in a frantic world: Amazon.co.uk: Prof Mark Williams, Dr Danny Penman: 9780749953089: Books. 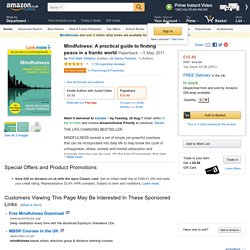 Flip to back Flip to front Listen Playing... Paused You're listening to a sample of the Audible audio edition. Learn more. Depersonalization Recovery - Cure DP Disorder and Symptoms of Derealization with this 10-Hour Video Program. How To Love A Depressed Man. You meet him when he’s alone, probably smoking a cigarette outside of a bar, or looking for a book in the library. 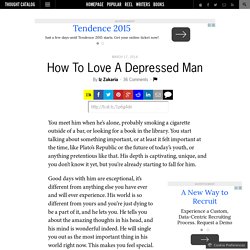 You start talking about something important, or at least it felt important at the time, like Plato’s Republic or the future of today’s youth, or anything pretentious like that. His depth is captivating, unique, and you don’t know it yet, but you’re already starting to fall for him. Good days with him are exceptional, it’s different from anything else you have ever and will ever experience. His world is so different from yours and you’re just dying to be a part of it, and he lets you. He tells you about the amazing thoughts in his head, and his mind is wonderful indeed. Cycle.aspx.url. The word "ruminate" derives from the Latin for chewing cud, a less than gentile process in which cattle grind up, swallow, then regurgitate and rechew their feed. 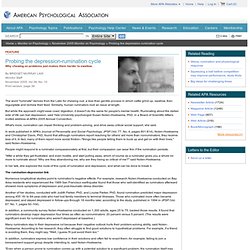 Similarly, human ruminators mull an issue at length. But while the approach might ease cows' digestion, it doesn't do the same for people's mental health: Ruminating about the darker side of life can fuel depression, said Yale University psychologist Susan Nolen-Hoeksema, PhD, in a Board of Scientific Affairs invited address at APA's 2005 Annual Convention. What's more, rumination can impair thinking and problem-solving, and drive away critical social support, she said. In work published in APA's Journal of Personality and Social Psychology, JPSP (Vol. 77, No. 4, pages 801-814), Nolen-Hoeksema and Christopher Davis, PhD, found that although ruminators report reaching for others' aid more than nonruminators, they receive less of it.

The rumination-depression link. Spotting the Signs of a Depressive Episode - Major Depression Resource Center - Everyday Health.url. Does Effexor XR really work for anybody. Bloggerdollar.hubpages.com-hub-How-to-Get-Out-of-Depression.url. I started to read about depression. 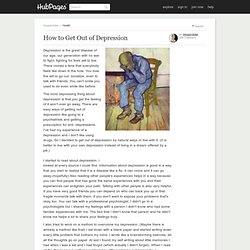 Midwest Center Peer Support. Social Anxiety Forum. I deeply hate this world.. Is Depression a Legitimate Disability? I just read an op-ed piece written by a doctor in which he discusses why he feels it would be better for people with depression to be forced to work rather than allowed to go on disability. 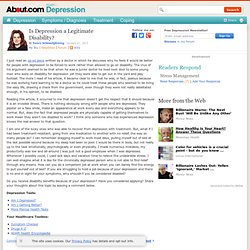 The crux of his argument seemed to be that when he was a junior doctor he lived next door to some young men who were on disability for depression yet they were able to get out in the yard and play football. The more I read of his article, it became clear to me that he was, in fact, jealous because he was working hard learning to be a doctor so he could treat these people who seemed to be living the easy life, drawing a check from the government, even though they were not really debilitated enough, in his opinion, to be disabled.

Reading this article, it occurred to me that depression doesn't get the respect that it should because it is an invisible illness. There is nothing obviously wrong with people who are depressed. Do you receive disability benefits because of your depression? Depression Tests: How to Fight Depression and Anxiety. What's the best way to deal with depressiona and anxiety? 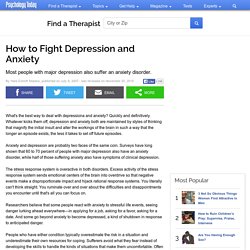 Quickly and definitively. Whatever kicks them off, depression and anxiety both are maintained by styles of thinking that magnify the initial insult and alter the workings of the brain in such a way that the longer an episode exists, the less it takes to set off future episodes. Anxiety and depression are probably two faces of the same coin. Surveys have long shown that 60 to 70 percent of people with major depression also have an anxiety disorder, while half of those suffering anxiety also have symptoms of clinical depression. The stress response system is overactive in both disorders. Panic Miracle™ - Tips For Panic Attack. ATTENTION! 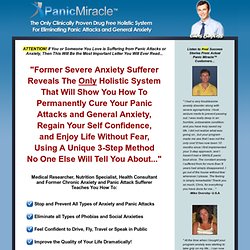 If You or Someone You Love is Suffering from Panic Attacks or Anxiety, Then This Will Be the Most Important Letter You Will Ever Read... Stop and Prevent All Types of Anxiety and Panic Attacks Eliminate all Types of Phobias and Social Anxieties Feel Confident to Drive, Fly, Travel or Speak in Public Improve the Quality of Your Life Dramatically! 10 Wise Choices to Skyrocket Your Happiness. “The amount of happiness that you have depends on the amount of freedom you have in your heart.” – Thich Nhat Hanh Who doesn’t want to be happy? 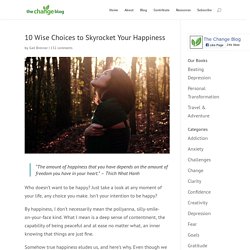 Just take a look at any moment of your life, any choice you make. Isn’t your intention to be happy? By happiness, I don’t necessarily mean the pollyanna, silly-smile-on-your-face kind. Overcome Social Anxiety with the 3-Second Rule. Going public with depression. Kat Kinsman was diagnosed with depression at age 14 after many bouts with the illnessShe found relief through counseling, medication and talking about the conditionKinsman wishes a friend she lost to suicide could have found the support she hasThe more others share their depression struggles publicly, the less alone Kinsman feels Editor's note: Comedic actor Robin Williams died at his Northern California home Monday, law enforcement officials said. Williams was 63. His representative said, "He has been battling severe depression of late. " CNN's Kat Kinsman writes that talking freely about personal mental health issues and suicidal thoughts, whether you're a public figure or a private person, can help those who share the struggle.

When Being Alone Turns Into Loneliness, There Are Ways to Fight Back. Www.stumbleupon.com-to-s-6AYJx2.url.