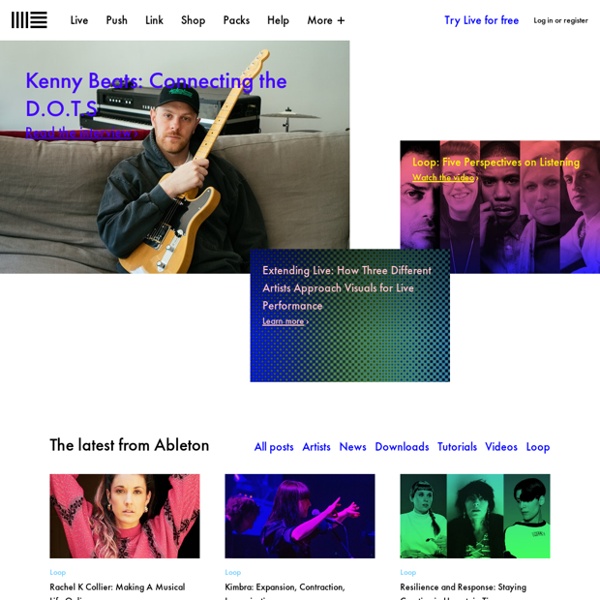 Ikmultimedia Since 1996, IK Multimedia has been a pioneer in the music software revolution. Today, we offer the most diverse and best sounding assortment of music creation tools for mobile and computer platforms, with a range spanning hardware accessories and software applications for guitar and bass players, keyboard players, vocalists, DJs and producers. All IK products share the same "Musicians First" design philosophy. Installing ZSH · robbyrussell/oh-my-zsh Wiki Zsh? Oh-My-Zsh is a framework for Zsh, the Z shell. In order for Oh-My-Zsh to work, Zsh must be installed. Please run zsh --version to confirm.Expected result: zsh 5.0.5 or more recentAdditionally, Zsh should be set as your default shell. Please run echo $SHELL from a new terminal to confirm.Expected result: /bin/zsh Installing Zsh

ProTools Crank up your creativity and speed From powerful new loop-based music creation and trying ideas via Revision History, to timesaving workflows that simplify editing and post production, Pro Tools enables you to create at the speed of your imagination—without limits. That’s why top artists, musicians, producers, mixers, engineers, sound designers, recording studios, and post facilities choose Pro Tools for everything they do. The best iPad/iPhone music-making apps in the world today Although there will be some who'll try and tell you different, iOS music making apps are not just toys. Many of them are extremely accessible, certainly, but this isn't to their detriment. And, if you want to get serious, you'll also find plenty of apps that boast features that are on a par with those of their desktop cousins. What's more, there's more than one way to approach these apps. If you're looking for something that you can just pass a few minutes with on your commute, it's out there, while other releases can serve as great musical sketchpads that will enable you to start tracks that can later be worked on in your full Mac or PC DAW. If you want to start building the ultimate iOS studio, there's no better place to start.

KVR The Wizooverb W2 "High-End True Stereo Room Emulator" includes 15 HDIR (High Definition Impulse Response) models providing acoustic fingerprints of excellent sounding rooms with a precision and clarity apparently only possible with this "ground breaking" technology. Wizoo claims that HDIR is the difference between 'adding an effect' and 'putting your track into a real room'. The W2 also includes the flexible, transparent and natural sounding AIR algorithmic reverb which can be combined seamlessly with the HDIR models. Naturally the W2 will load your existing impulse responses and Wizoo claims that the IR optimization will make your imported impulse responses sound much better than in any other conventional response reverb. Features: HDIR standard: High-end room emulation with unprecedented quality, definition, clarity and spatial accuracy.

Mac OS X Setup Guide We'll install zsh for all the features offered by oh-my-zsh. The installation and usage is really intutive. The env.sh is a config file we maintain so as to not pollute the ~/.zshrc too much. env.sh holds aliases, exports, path changes etc. Zsh Studio One Get tactile control. The StudioLive CS18AI is the first surface designed by PreSonus to control Studio One. Connected with a single Ethernet cable, you get 18 touch-sensitive moving faders, dedicated Fat Channel controls, markers, transport, scribble strips, filter DCA mix layers, and more. The CS18AI is also a 4 x 2 interface, providing additional I/O. Short on space or just want to get away from your desk?

The best Android music making apps in the world today First the bad news: despite having a huge installed user base, when it comes to music making apps, Android remains very much the poor relation to Apple’s iOS. This isn’t because developers don’t want to release apps for Google’s mobile OS, rather that various problems - notably high audio latency and the fact that there are numerous devices and different versions of Android in circulation - have prevented them from doing so. However, all is not lost. Sonoma Wire Works recently announced that it’s developed a low latency audio solution for Android (though time will tell if device manufacturers will implement this into their products) and more companies seem to be taking a second look at the platform. What’s more, there are Android music making apps on the market right now: what follows is a guide to some of the best ones available (they’re listed in no particular order, by the way).

MTT16: Creative composition projects using music technology In this episode: What types of creative music tech projects can I do with my middle or senior school students? I share my favourites which include film scoring, video game composition, the science of sound, digital storytelling, song writing, recording covers and more. Listen to the episode here (or on your favourite podcast app): TouchOSC Modular OSC and MIDI control surface for iPhone / iPod Touch / iPad Send and receive Open Sound Control and MIDI messages over Wi-Fi and control CoreMIDI compatible software, hardware and mobile apps. Also available for Android Screenshots