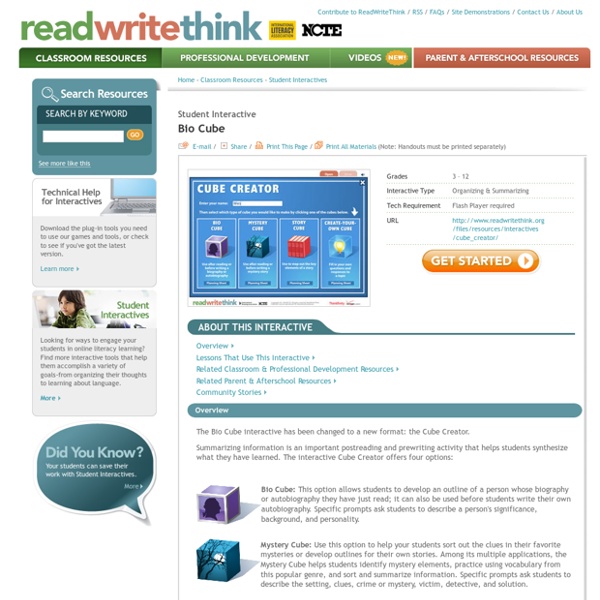 The Bio Cube interactive has been changed to a new format: the Cube Creator. Summarizing information is an important postreading and prewriting activity that helps students synthesize what they have learned. The interactive Cube Creator offers four options: Bio Cube: This option allows students to develop an outline of a person whose biography or autobiography they have just read; it can also be used before students write their own autobiography. Specific prompts ask students to describe a person's significance, background, and personality. Mystery Cube: Use this option to help your students sort out the clues in their favorite mysteries or develop outlines for their own stories. Story Cube: In this cube option, students can summarize the key elements in a story, including character, setting, conflict, resolution, and theme. Create-Your-Own Cube: Working on a science unit? Students can save their draft cubes to revise later. Related Classroom & Professional Development Resources

Interactives on ReadWriteThink Find content from Thinkfinity Partners using a visual bookmarking and sharing tool. More Your students can save their work with Student Interactives. More Home › Results from ReadWriteThink 1-10 of 21 Results from ReadWriteThink Homework Center: How to Write a Biography A biography is simply the story of a life. Biographies can be just a few sentences long, or they can fill an entire book—or two. Very short biographies tell the basic facts of someone's life and importance. Longer biographies include that basic information of course, with a lot more detail, but they also tell a good story. Biographies analyze and interpret the events in a person's life.

A Beautiful Classroom Poster on Writing Accuracy April , 2014 Below is a wonderful classroom poster I came across in Edutopia's Pinterest board.The poster outlines 5 things students should pay heed to when engaged in writing tasks. You can print and use this poster in your class with your students. It can be used as a self assessment checklist that students draw on when working on their writings. It can also be a good way to initiate discussions around areas that pose real difficulties to students writings. Th areas that the Onion graphic features are :1-Punctuation: Start by checking for accurate punctuation: fullstops, capital letters, commas and apostrophes. 2- Words Have you chosen the most interesting and well matched words for your subject, type of text and topic?

Life and style Ken Loach, 75, was born in Warwickshire. After grammar school, he went to Oxford University where he read law. He started his career in the theatre and went on to become a BBC television director in 1963. He worked on Z Cars and then the Wednesday Play, where he directed the classic Cathy Come Home. The Coop Times All stories written in this game are automatically published to The Coop Times newspaper - read them here. By Adam Carr - @2HitAdam with special thanks to Omeed Dariani, Jola Pez and Matt Carr for submitting extra prompts! Music "Big Fish" and "Full Hand" by playonloop.com CC BY 3.0

Woody Allen - Bio, Facts, Family About Iconic writer and director known for his unique blend of comedy and style. His most celebrated films include Annie Hall, Manhattan, Hannah and Her Sisters, Deconstructing Harry, and Midnight in Paris. Famous film directors -Biography Online A selection of famous film directors with a brief overview of their career and most influential movies. Charlie Chaplin (1889 – 1977) Iconic film actor whose career spanned the birth of movies in the silent era to mainstream colour films. Influential film roles included the films, The Kid (1921) and The Great Dictator (1940) Frank Capra (1897  – 1991) – Italian-American film producer, who rose from poverty to make some of the most popular films of the 30s and 40s. Famous films included It Happened One Night (1934) Mr.

Story Map The Story Map interactive includes a set of graphic organizers designed to assist teachers and students in prewriting and postreading activities. The organizers are intended to focus on the key elements of character, setting, conflict, and resolution development. Students can develop multiple characters, for example, in preparation for writing their own fiction, or they may reflect on and further develop characters from stories they have read. Neil Armstrong: ESL/EFL Lesson Plan and Worksheet Neil Armstrong was born in 1930, in Ohio, in the United States. He was always interested in planes and flying. He learned how to fly a plane before he could drive a car! After high school, he went to college and joined the US Navy as a pilot. In the 1950s, the United States and the Soviet Union were in a race to send the first person into space. In 1961, the Soviets were winning when Yuri Gagarin traveled around the Earth.