10 Books that Screwed Up The World 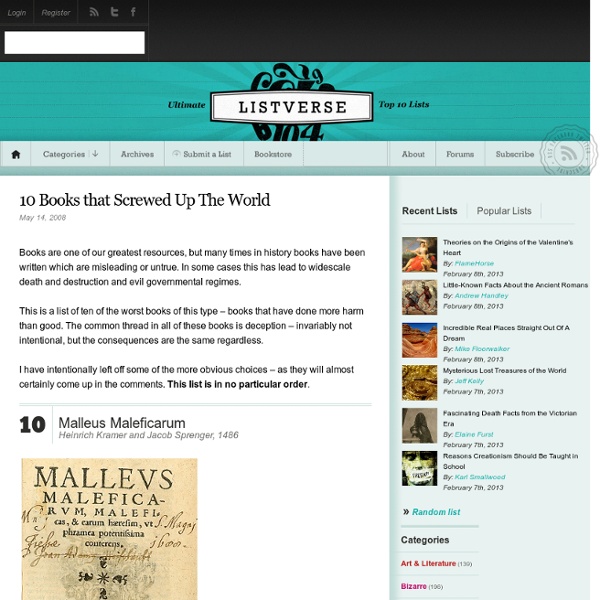 Books Books are one of our greatest resources, but many times in history books have been written which are misleading or untrue. In some cases this has lead to widescale death and destruction and evil governmental regimes. This is a list of ten of the worst books of this type – books that have done more harm than good. The common thread in all of these books is deception – invariably not intentional, but the consequences are the same regardless. I have intentionally left off some of the more obvious choices – as they will almost certainly come up in the comments. Malleus Maleficarum Heinrich Kramer and Jacob Sprenger, 1486 On the list because: It inflamed witch hunts across Europe Malleus Maleficarum (The Hammer of Witchraft) was a manual for witch hunters and judges to catch witches and stamp them out. Coming of Age in Samoa Margaret Mead, 1928 On the list because: it turned out to be a creation of her own sexual confusions and aspirations The Prince Niccolò Machiavelli, 1532 Mein Kampf Unknown

The Half Price Blog - The Official Blog of Half Price Books - 40 Books Every Child Should Read Half Price Blog Shop Online Our Stores Gift Cards Sell to Us In the Community Half Price Blog Talk to Us Top Half Price Blog Half Price Books presents the Half Price Blog featuring book reviews, music and movie reviews, trivia and randomness about things we love. That means a whole lot of fiction, nonfiction, music, movies, games, and collectibles… including rare and out-of-print literary treasures. Authors BeckyPotluck-genius, insomniac-procrastinator and crafting-whiz. EmilyPR maven, news junkie, baseball fanatic, late-night talk show watcher, frequent restaurant diner and former VH-1 reality show addict. JimFilm buff and wanna-be chef. JDMusic enthusiast and all around acceptable person. KateRecovering English Major with a penchant for poly-blend, bibliophilic worms. MeredithDonned in an apron, baking pies and other tempting treats – there's nothing desperate about this housewife. Subjects Search the Blog Subscribe via Email via RSS Follow HPB Subscribe via RSS The Half Price Blog Monday Books,

Neil deGrasse Tyson Lists 8 (Free) Books Every Intelligent Person Should Read A Reddit.com user posed the question to Neil deGrasse Tyson: "Which books should be read by every single intelligent person on the planet?" Below, you will find the book list offered up by the astrophysicist, director of the Hayden Planetarium, and popularizer of science. Where possible, we have included links to free versions of the books, all taken from our Free Audio Books and Free eBooks collections. Or you can always download a professionally-narrated book for free from Audible.com. Details here. If you're looking for a more extensive list of essential works, don't miss The Harvard Classics, a 51 volume series that you can now download online. 1.) 2.) 3.) 4.) 5.) 6.) 7.) 8.) Tyson concludes by saying: "If you read all of the above works you will glean profound insight into most of what has driven the history of the western world." He has also added some more thoughts in the comments section below, saying: Thanks for this ongoing interest in my book suggestions. Related Content:

10 Essential Books for Book Nerds What makes a book nerd? Reading a lot of books — and liking to talk about said books — is a major requirement, of course, but there’s often something a little more nebulous involved: book nerds are the kinds of people who get a little thrill when walking into a bookstore, who press volumes into their friends’ hands with serious promises of life changing moments, who are fascinated by following the many tangled threads through authors and literature, happily wandering wherever they might lead. Robin Sloan’s recently published Mr. Penumbra’s 24-Hour Bookstore is a book for such people — if you can’t already tell from the title. If you count yourself among them (or are looking for a gift for the same), we’ve put together a list of books you might want to consider taking a look at. Click through to read through our list of essential books for book nerds — and since you’re probably not a true book nerd if you’re satisfying with ten, add your own picks to our list in the comments! Mr.

30 Books I’m Glad I Read Before 30 In various ways, these 30 books convey some of the philosophy of how Angel and I live our lives. I honestly credit a fraction of who I am today to each title. Thus, they have indirectly influenced much of what I write about on this site. A medley of both fiction and nonfiction, these great reads challenged my internal status quo, opening my mind to new ideas and opportunities, and together they gave me a basic framework for living, loving, learning and working successfully. If you haven’t read these books yet, I highly recommend doing so. Stumbling on Happiness by Daniel Gilbert – Gilbert, a Harvard professor of psychology has studied happiness for decades, and he shares scientific findings that just might change the way you look at the world. What are your favorite books? Photo by: Katie Harris

The 16 Best Dystopian Books Of All Time Dystopian novelsâ€”stories of the horrific futureâ€”are so common as to be almost forgettable. Here is a compilation of what I believe are the 16 greatest of the genre. I could happily list twice as many that are amazing, but these are the best. From the post-apocalyptic wasteland to deadly viruses to social malaise, all possible bad futures end here. 16. Best known for his Narnia novels, CS Lewis also wrote a trilogy dealing with visiting other planetsâ€”well the first two books did. 15. Wow, can you get more polar opposite of CS Lewis than Margaret Atwood? 14. While perhaps not as well known as some, John Christopher (the pen name of Samuel Youd) wrote a fantastic trilogy of young adult novels, set in a far future where the world has reverted to a feudal society after a global ecological disaster. 13. This novel, combined with Brooks’ Zombie Survival Guide are all you need to face the inevitable zombie apocalypse. 12. 11. Lets just throw all of Gibson’s cyberpunk in here, shall we?

30 Books Everyone Should Read Before Their 30th Birthday The Web is grand. With its fame for hosting informative, easy-to-skim textual snippets and collaborative written works, people are spending more and more time reading online. Nevertheless, the Web cannot replace the authoritative transmissions from certain classic books that have delivered (or will deliver) profound ideas around the globe for generations. The 30 books listed here are of unparalleled prose, packed with wisdom capable of igniting a new understanding of the world. Everyone should read these books before their 30th birthday. Siddhartha by Hermann Hesse – A powerful story about the importance of life experiences as they relate to approaching an understanding of reality and attaining enlightenment.1984 by George Orwell – 1984 still holds chief significance nearly 60 years after it was written in 1949. Related True Measure of Understanding: Ignorance Generates Negativity In the absence of understanding human reaction is generally negative. August 27, 2007 In "Aspirations"

50 notable works of fiction Wilson’s marvelous first novel takes events similar to those of the Arab Spring, adds a runaway computer virus, an unconventional love story and the odd genie to create an intoxicating, politicized amalgam of science fiction and fantasy. — Elizabeth Hand By Ivan Doig (Riverhead) In this subtle and engaging narrative, a 12-year-old boy tries to figure out the adult world, including his saloonkeeper father. Doig, 73, delivers a slow-paced novel filled with the joys of careful and loving observation. — Jon Clinch By Jess Walter (Harper) Hopscotching between 1960s Italy and today’s Hollywood, the story sends a young Italian in search of a long-remembered starlet in a plot that’s lively and well constructed — a lemon meringue pie of a novel: crisp and funny on top, soft and gooey inside. — Allegra Goodman By Chase Novak (Mulholland) By Laura Moriarty (Riverhead) In Moriarty’s captivating novel, we meet silent-screen star Louise Brooks long before her arrival in Hollywood. DEAR LIFE: Stories St.

Curated Fantasy Books | Find your next read 8 Books For a Higher Existence Books are magical inventions. By carrying meaning, they gives us glimpses of experience and knowledge from a different world. Phonetic language, being cut-off from time and place, the Now, helps both to encapsulate the ego more, but also to offer guidance to make it poriferous, letting Eros free. Without books we would lose this guidance. And in these times of dire ecological and cultural crisis, we need new ways to respond to the ecosystem that we simultaneous are and are imbedded in. If you’re done reading this list and want to level up more – check out part two! Thus Spoke Zarathustra – Friedrich Nietzsche Thus Spoke Zarathustra is Nietzsche’s most prophetic book in which he offers his teachings through the words of Zarathustra, based on the Persian prophet Zoroaster, who, after spending ten years on a mountain in meditation only accompanied by his Eagle and Serpent, comes down to offer his wisdom to the world. Becoming Animal – David Abram The Story of B – Daniel Quinn

Anthony Bourdain's Favorite Books The 50 Books Everyone Needs to Read, 1963-2013 The thing about reading is this: it takes a long time. There are innumerable books in the world, and many more good ones than can be read by any mortal in a lifetime. It’s hard to choose — especially if you’re a slow reader. 1963 — The Bell Jar, Sylvia Plath Sylvia Plath’s only novel manages to be both elegant and filled with raw, seething emotion – no small feat, and not the least of the reasons the reading world is still obsessed with her. Also recommended: Where the Wild Things Are, Maurice Sendak; The Group, Mary McCarthy; V., Thomas Pynchon; Cat’s Cradle, Kurt Vonnegut; The Feminine Mystique, Betty Friedan