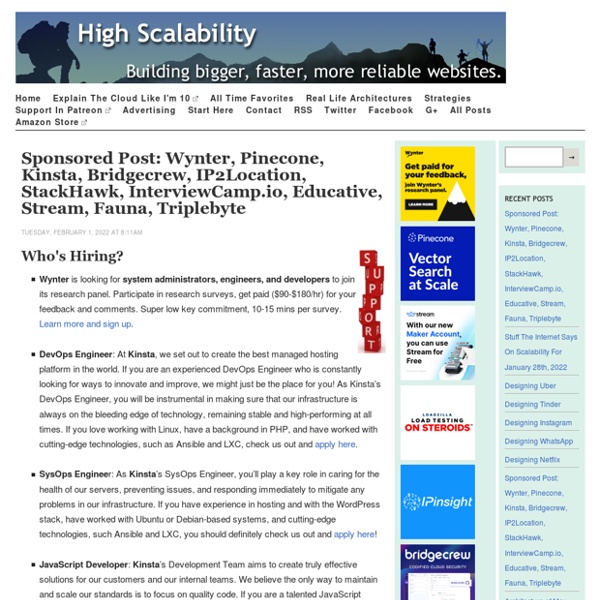 In a recent thread on Hacker News discussing recent AWS price changes, seldo mentioned they use AWS for business, they just never use EBS on AWS. A good question was asked: How do you even do anything without using EBS? Amazon certainly makes using EBS the easiest path. And EBS has a better reliability record as of late, but it's still often recommended to not use EBS. This avoids a single point of failure at the cost of a lot of complexity, though as AWS uses EBS internally, not using EBS may not save you if you use other AWS services like RDS or ELB.

CentOS 5.3 Samba Standalone Server With tdbsam Backend Version 1.0 Author: Falko Timme <ft [at] falkotimme [dot] com> Last edited 04/20/2009 This tutorial explains the installation of a Samba fileserver on CentOS 5.3 and how to configure it to share files over the SMB protocol as well as how to add users. Samba is configured as a standalone server, not as a domain controller. 20 Essential Java Interview Questions and Answers The key difference between is that inner classes have full access to the fields and methods of the enclosing class. This can be convenient for event handlers, but comes at a cost: every instance of an inner class retains and requires a reference to its enclosing class. With this cost in mind, there are many situations where we should prefer static nested classes. When instances of the nested class will outlive instances of the enclosing class, the nested class should be static to prevent memory leaks.

New Ways to Discover and Use Alexa Skills Introducing New Features That Make It Easier for Customers to Discover and Use Your Alexa Skills Alexa, Amazon’s cloud-based voice service, powers voice experiences on millions of devices, including Amazon Echo and Echo Dot, Amazon Tap, Amazon Fire TV devices, and devices like Triby that use the Alexa Voice Service. One year ago, Amazon opened up Alexa to developers, enabling you to build Alexa skills with the Alexa Skills Kit and integrate Alexa into your own products with the Alexa Voice Service. Today, tens of thousands of developers are building skills for Alexa, and there are over 1,400 skills for Alexa – including Lyft and Honeywell, which were added today.

Quiet.js by brian-armstrong This is a javascript binding for libquiet, a library for sending and receiving data via sound card. It can function either via speaker or cable (e.g., 3.5mm). Quiet comes included with a few transmissions profiles which can be selected for the intended use. For speaker transmission, there is a profile which transmits around the 19kHz range, which is essentially imperceptible to the human ear. Quiet uses the Web Audio functionality in order to send and receive sound. Sending data is supported by Chrome, Firefox, Safari, and Edge. Networking HP PPA DeskJet Printers using SAMBA.: Emulating a Pos Next PreviousContents 4. Emulating a PostScript printer on a Windows Host. If you do not have commercial PostScript emulation software for Windows that will work with your HP PPA DeskJet (the author is unaware of any such software that supports PPA printers), you can use Ghostscript together with HP's native Windows drivers.

25 Essential Questions Asked in Top JavaScript Interviews The above code will output the following to the console: "122" "32" "02" "112" "NaN2" NaN Here’s why… Writing Unit tests for C/C++ with the Microsoft Unit Testing Framework for C++ In Visual Studio, you can create unit tests for unmanaged code written in C++. Unmanaged code is sometimes referred to as native code. The following procedure contains the essential information that will get you started. The later sections provide a walkthrough that describes the steps in more detail. To write unit tests for an unmanaged code DLL You can adapt this walkthrough to develop your own DLL.

What Makes Software Good? With that preamble, here are some of the changes I’m making to D3 with an eye towards usability. But first a crash course on D3’s data-join. Case 1. ESX How To VMware ESX 2.1/5 Server: Beyond the Manual Document Version 1.6 By Mike Laverick © RTFM Education MongoDB Exercises, Practice, Solution What is MongoDB? MongoDB is a free and open-source cross-platform document-oriented database. Classified as a NoSQL database, MongoDB avoids the traditional table-based relational database structure in favor of JSON-like documents with dynamic schemas, making the integration of data in certain types of applications easier and faster.