50 Incredibly Useful Windows Tools for Everyone (Free) - RankRed. With more than 85% of market share, Windows is the most popular desktop operating system. 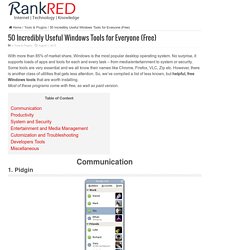 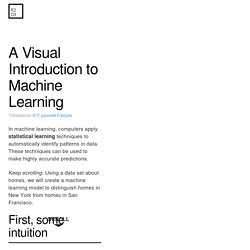 Map Visualisation for Panama Papers and Offshore Leaks in R. On May 9, 2016, the International Consortium of Investigative Journalists (“ICIJ” in short), a global network of journalists who collaborates on in-depth and investigative stories, released the long awaited offshore entities database behind Panama Papers Investigation. 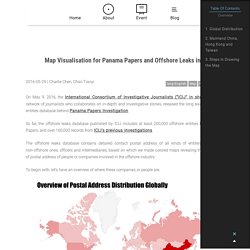 So far, the offshore leaks database published by ICIJ includes at least 200,000 offshore entities from Panama Papers, and over 100,000 records from ICIJ’s previous investigations. The offshore leaks database contains detailed contact postal address of all kinds of entities, offshore or non-offshore ones, officers and intermediaries, based on which we made colored maps revealing the distribution of postal address of people or companies involved in the offshore industry. To begin with, let’s have an overview of where these companies or people are. Global Distribution In the world map, it is quite easy to find China who has the most address records.

Mainland China, Hong Kong and Taiwan Steps in Drawing the Map 1. 10+ Online Photo Editing Site - Codiblog. An online photo editing site helps you to edit your photo free as your like without using Photoshop and illustrator software. 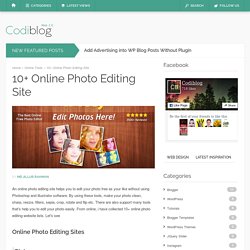 By using these tools, make your photo clean, sharp, resize, filters, sepia, crop, rotate and flip etc. There are also support many tools that's help you to edit your photo easily. From online, i have collected 10+ online photo editing website lists. How I record my own conference presentations. A Neural Network Playground. Um, What Is a Neural Network? 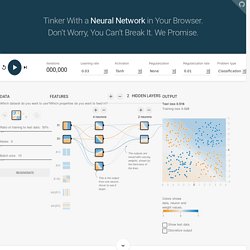 It’s a technique for building a computer program that learns from data. It is based very loosely on how we think the human brain works. First, a collection of software “neurons” are created and connected together, allowing them to send messages to each other. Next, the network is asked to solve a problem, which it attempts to do over and over, each time strengthening the connections that lead to success and diminishing those that lead to failure. Google to Developers: Here’s How to Stop Making Dumb Chatbots. The search company is releasing the secret sauce it uses to make sense of ambiguous language. 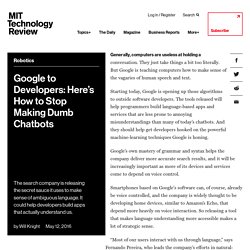 It could help developers build apps that actually understand us. Generally, computers are useless at holding a conversation. They just take things a bit too literally. But Google is teaching computers how to make sense of the vagaries of human speech and text. Starting today, Google is opening up those algorithms to outside software developers. The Stoic: 9 Principles to Help You Keep Calm in Chaos. Robbyrussell/oh-my-zsh: A delightful community-driven framework for managing your zsh configuration. Includes 200+ optional plugins (rails, git, OSX, hub, capistrano, brew, ant, php, python, etc), over 140 themes to spice up your morning, and an.

Testing with JUnit - PacktLib. Google Thinking About Replacing Java with Apple's Swift for Android. Last December, about the same time when Apple was busy announcing that its Swift programming language was going open-source at the Worldwide Developers Conference (WWDC), representatives from Google, Facebook, and Uber were having a secret meeting somewhere in London about Swift's future, TNW reports, citing an inside source. 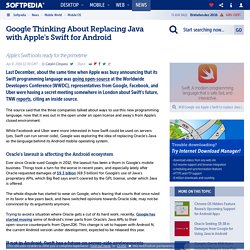 The source said that the three companies talked about ways to use this new programming language, now that it was out in the open under an open license and away's from Apple's closed environment. While Facebook and Uber were more interested in how Swift could be used on servers (yes, Swift can run server-side), Google was exploring the idea of replacing Oracle's Java as the language behind its Android mobile operating system.

IntelliJ IDEA. History[edit] The first version of IntelliJ IDEA was released in January 2001, and was one of the first available Java IDEs with advanced code navigation and code refactoring capabilities integrated.[3][4] System requirements[8][edit] Features[edit] Coding assistance[edit] The IDE provides certain features[10] like code completion by analyzing the context, code navigation where one can jump to a class or declaration in the code directly, code refactoring and providing options to fix inconsistencies via suggestions. 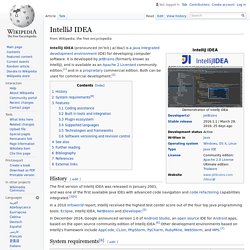 Built in tools and integration[edit] Plugin ecosystem[edit] IntelliJ supports plugins through which one can add additional functionality to the IDE. Our Products - OnCourse Systems for Education. Get Started OnCourse Products Overview Powerful web-based solutions for public and private schools. 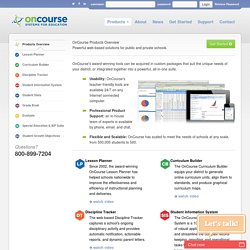 OnCourse's award-winning tools can be acquired in custom packages that suit the unique needs of your district, or integrated together into a powerful, all-in-one suite. Usability: OnCourse's teacher-friendly tools are available 24/7 on any Internet connected computer. Professional Product Support: an in-house team of experts is available by phone, email, and chat. Generating a new SSH key and adding it to the ssh-agent. After you've checked for existing SSH keys, you can generate a new SSH key to use for authentication, then add it to the ssh-agent. 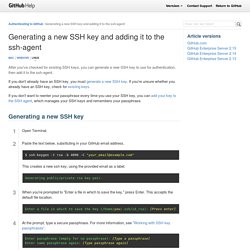 Register a Domain. Try Git. Book. Fastest-growing tech skills worth over $110,000. Trump and Clinton share Delaware tax 'loophole' address with 285,000 firms - The Today Events. There aren’t many things upon which Hillary Clinton and Donald Trump agree, especially as they court very different Delaware voters ahead of a primary on Tuesday. But the candidates for president share an affinity for the same nondescript two-storey office building in Wilmington.

A building that has become famous for helping tens of thousands of companies avoid hundreds of millions of dollars in tax through the so-called “Delaware loophole”. Five Key Mindsets that Separate Successful Programmers from Everyone Else. Dave Cutler, at age 74, still goes to his office at Microsoft every day to write code. I first heard of Cutler when he was honored as a Computer History Museum Fellow for his five decades (!) Of work in the computer industry. 1 Based on his lifelong dedication to engineering alone, many would consider him a “hardcore” programmer. What’s even more awe-inspiring than his long tenure, however, is that his work has influenced the computing experiences of over 2 billion people. Among his many contributions, Cutler built critical pieces of Windows NT — the basis of all major versions of Windows in the past twenty years — and gave Microsoft a huge market advantage in its early days by making the operating system backwards-compatible with earlier software.

He’s been called the “key technical brain behind the Microsoft Windows operating system.” 2. ‘Do What You Love’ Is Terrible Advice. It’s been said in many places and by many luminaries: Do what you love. But what does this phrase actually mean? Miya Tokumitsu, a contributing editor at Jacobin magazine and author of the new book Do What You Love And Other Lies About Success and Happiness, criticizes the pervasiveness of this idea in American work culture. She argues that “doing what you love” has been co-opted by corporate interests, giving employers more power to exploit their workers. I recently spoke with Tokumitsu about work myths and why we should pay attention to them. The following transcript of our conversation has been edited for clarity. GitHub Enterprise 2.6 is here with faster, more approachable workflows.