Tropical Fish Species I Own. 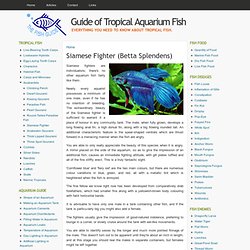 Nearly every aquarist possesses a minimum of one male, even if he has no intention of breeding. The extraordinary beauty of the Siamese fighter is sufficient to warrant it a place of honour in any community tank. The male, when fully grown, develops a long flowing anal fin, a high dorsal fin, along with a big flowing rounded tail. An additional characteristic feature is the spear-shaped ventrals which are thrust forward in a menacing manner when the fish are angry. You are able to only really appreciate the beauty of this species when it is angry. Types of Bettas, by colour, tailss, patterns and genetics. Siamese fighting fish. The Siamese fighting fish, also sometimes colloquially known as the betta (Betta splendens), is a species of gourami which is extremely popular as an aquarium fish. 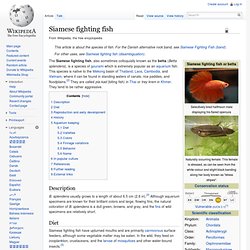 This species is native to the Mekong basin of Thailand, Laos, Cambodia, and Vietnam, where it can be found in standing waters of canals, rice paddies, and floodplains.[2] They are called pla-kad (biting fish) in Thai or trey krem in Khmer. They tend to be rather aggressive. Description B. splendens usually grows to a length of about 6.5 cm (2.6 in).[2] Although aquarium specimens are known for their brilliant colors and large, flowing fins, the natural coloration of B. splendens is a dull green, browns, and gray, and the fins of wild specimens are relatively short.

Diet Siamese fighting fish have upturned mouths and are primarily carnivorous surface feeders, although some vegetable matter may be eaten. Siamese Fighting Fish Care And Forum. All pictures were provided by Laura M. 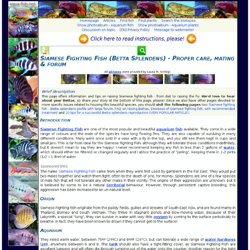 Rummy-nose tetra. The rummy-nose tetra, Hemigrammus rhodostomus, is a species of tropical freshwater characin fish originating in South America, popular among fishkeepers as an aquarium fish. 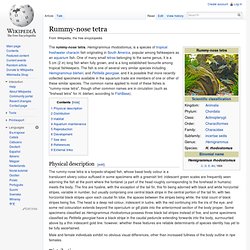 One of many small tetras belonging to the same genus, it is a 5 cm (2 in) long fish when fully grown, and is a long established favourite among tropical fishkeepers. The fish is one of several very similar species including Hemigrammus bleheri, and Petitella georgiae, and it is possible that more recently collected specimens available in the aquarium trade are members of one or other of these similar species.

The common name applied to most of these fishes is "rummy-nose tetra", though other common names are in circulation (such as "firehead tetra" for H. bleheri, according to FishBase). Physical description[edit] Male and female individuals exhibit no obvious visual differences, other than increased fullness of the body outline in ripe females. Distribution[edit] Red Nose Tetra (Hemigrammus Rhodostomus) Serpae tetra. Serpae tetras are one species of the genus Hyphessobrycon, and are now known as Hyphessobrycon eques. 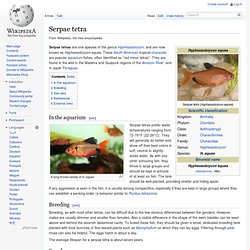 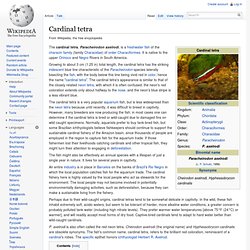 However, many breeders are now producing the fish; in most cases one can determine if the cardinal tetra is bred or wild-caught due to damaged fins on wild caught specimens. Normally, aquarists prefer to buy tank-bred fish, but some Brazilian ichthyologists believe fishkeepers should continue to support the sustainable cardinal fishery of the Amazon basin, since thousands of people are employed in the region to capture fish for the aquarium trade. If those fishermen lost their livelihoods catching cardinals and other tropical fish, they might turn their attention to engaging in deforestation. The fish might also be effectively an annual species with a lifespan of just a single year in nature. 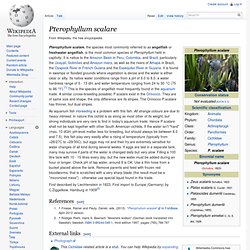 It is native to the Amazon Basin in Peru, Colombia, and Brazil, particularly the Ucayali, Solimões and Amazon rivers, as well as the rivers of Amapá in Brazil, the Oyapock River in French Guiana and the Essequibo River in Guyana. It is found in swamps or flooded grounds where vegetation is dense and the water is either clear or silty. Its native water conditions range from a pH of 6.0 to 8.0, a water hardness range of 5 - 13 dH, and water temperature ranging from 24 to 30 °C (75 to 86 °F).[1] This is the species of angelfish most frequently found in the aquarium trade. Think Fish - Article: Angelfish. Fish Profile for Angelfish, Angel Fish (Pterophyllum scalare, Platax scalaris, Plataxoides dumerilii, Pterophyllum altum, Pterophyllum dumerilii, Pterophyllum eimekei, Pterophyllum scalare, Zeus scalaris)

Types of Angelfish: The Many Freshwater Angelfish Varieties. There are dozens of freshwater angelfish varieties. 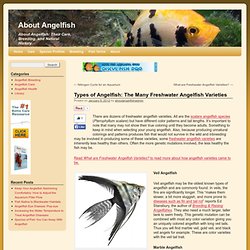 All are the scalare angelfish species (Pterophyllum scalare) but have different color patterns and tail lengths. It’s important to note that many may not show their true coloring until they become adults. Something to keep in mind when selecting your young angelfish. Angelfish - Tropical - Aquatic Fish - Tropicalfish-Scotland. Pterophyllum scalare - The Free Freshwater and Saltwater Aquarium Encyclopedia Anyone Can Edit - The Aquarium Wiki. From The Aquarium Wiki Freshwater Angelfish at the Montreal Biodome - Wild Type 113.562 liters 113,562.353 mL 113.6 Litres (30 US G.) 20.32 cm 15.2-20.3cm (6-8 ") This animal is available captive bred Additional names. 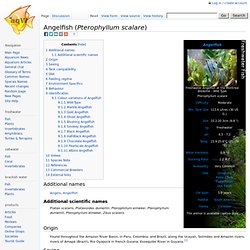 Red rainbowfish. The males are bright red and with age grow a high back. 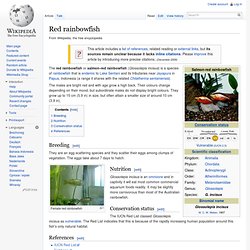 Their colours change depending on their mood, but subordinate males do not display bright colours. They grow up to 15 cm (5.9 in) in size, but often attain a smaller size of around 10 cm (3.9 in). Breeding[edit] They are an egg scattering species and they scatter their eggs among clumps of vegetation. The eggs take about 7 days to hatch. Guppy. The guppy (Poecilia reticulata), also known as million fish and rainbow fish,[1] is one of the world's most widely distributed tropical fish, and one of the most popular freshwater aquarium fish species.

It is a member of the Poeciliidae family and, like all other members of the family, is live-bearing.[2] Guppies, whose natural range is in northeast South America, were introduced to many habitats and are now found all over the world. They are highly adaptable and thrive in many different environmental and ecological conditions.[3] Male guppies, which are smaller than females, have ornamental caudal and dorsal fins, while females are duller in colour. Wild guppies generally feed on a variety of food source including benthic algae and aquatic insect larvae.[4] Guppies are used as a model organism in the field of ecology, evolution, and behavioural studies.[3] Taxonomy[edit] Distribution and habitat[edit] Description[edit] Poecilia velifera. Poecilia velifera, the Yucatan molly, lives in coastal waters of the Yucatan peninsula. These live-bearer (Poeciliidae) fish are particularly well known for both the extreme size variation among males, and the sexual dimorphism between males and females in both body shape and behavior.

African Filter ShrimpInformation on this large filter feeding shrimp from Africa. Ram cichlid. Appearance and sexual dimorphism[edit] A female M. ramirezi They are naturally soft water set of fish. Wild ram cichlids are often more colorful than the tank bred counterparts, which suffer from poor breeding and also being injected with hormones for more color, although this makes as many as one in four males infertile. Male specimens of the ram usually have the first few rays of the dorsal fin extended, but breeding has made some females also show this. There is also the fact that, when close to spawning, female rams have a pink or red blush on the abdomen. Panaque nigrolineatus. Rineloricaria sp. (L010A) Hemiancistrus sp. (L128)

Sailfin molly. The sailfin molly, Poecilia latipinna, is a species of fish, of the genus Poecilia. They inhabit fresh, brackish, and coastal waters from North Carolina to Texas and the Yucatán Peninsula of Mexico. Taxonomy[edit] The sailfin molly was originally described in 1821 as Mollienesia latipinna by the naturalist Charles Alexandre Lesueur.

This species was initial collected and utilized for aquaria in the early 1930s, and has been a firm favourite ever since. It should not be confused with the P. maculatus. The male isn't smaller than the female. Variatus platy. Description[edit] The variatus platy grows to a maximum overall length of 7.0 cm (2.8 in). In the wild, they are olive in colour with black marbling or spots on the side of the caudal peduncle. Large males show blackish blotches on the dorsal fin. Unlike some other members of the genus, X. variatus has no claw at the tip of the fifth anal fin ray. The fourth pectoral ray shows well-developed serrae (saw-like notches). Range and habitat[edit] Panda garra, Garra flavatra. Home » Features » Tropical fish Copyright © Neil Hepworth. Panda Garra (Garra flavatra) - Seriously Fish. Classification Order: Cypriniformes Family: Cyprinidae. Tropical Fish Finder.co.uk - The ultimate UK fish keeping resource for all types of tropical and marine fish, including fish books, articles, fish shops, fish clubs and more.

Among the surprising hits in the fishkeeping hobby in recent years have been the small minnows of the genus Garra. At first glance these fish could be mistaken for the fishes of the genera Crossocheilus, Epalzeorhynchus, and Labeo, commonly known as "sharks" or "algae eaters" in the hobby. But Garra can be distinguished by their broad heads and robust lips, adaptations to a more benthic lifestyle than those other cyprinids. Whereas fish like the Siamese algae eater Crossocheilus siamensis will flit about in midwater nibbling on the algae growing on plants and other flat surfaces, Garra tend to stay close to the substrate.

The reason for the popularity of the genus is probably best explained by their relatively small size and often quite attractive colours. Most species are around 10 cm in length, making them good choices for medium-sized aquaria. Ancistrus. Taxonomy[edit] The name ancistrus derives from the Greek 'agkistron' meaning hook – a reference to the form of the cheek odontodes.