Krakatoa, los últimos dias - Subt. Español - Cap. 1. Krakatoa: The Last Days. Largest volcanic eruption in human history changed the 19th century as much as Napoleon. Most have heard of the Battle of Waterloo, but who has heard of the volcano called Tambora? 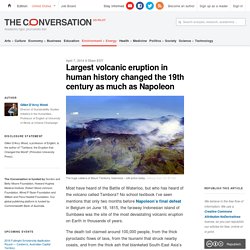 No school textbook I’ve seen mentions that only two months before Napoleon’s final defeat in Belgium on June 18, 1815, the faraway Indonesian island of Sumbawa was the site of the most devastating volcanic eruption on Earth in thousands of years. The death toll claimed around 100,000 people, from the thick pyroclastic flows of lava, from the tsunami that struck nearby coasts, and from the thick ash that blanketed South-East Asia’s farmlands, destroyed crops and plunged it into darkness for a week. Both events – Napoleon’s defeat and the eruption – had monumental impacts on human history. But while a library of scholarship has been devoted to Napoleon’s undoing at Waterloo, the scattered writings on Tambora would scarcely fill your in-tray. This extraordinary geological event took place 199 years ago this week, and on the cusp of its bicentenary Tambora is finally getting its due.

Click to enlarge. The colossal consequences of supervolcanoes - Alex Gendler. Which volcanoes are erupting? - List & map of active volcanoes erupting at present. All the World's Volcano Webcams. Never in the history of volcanology have so many volcanoes been monitored. 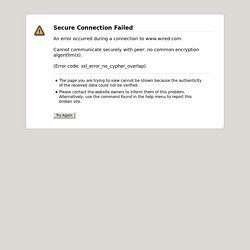 We have the ability to sit and watch hundreds of volcanoes as they sleep, rumble or erupt — all from the comfort of our homes or offices. This instant connectivity to volcanoes in some of the most remote parts of the world is what gives us the impression that there are more volcanic eruptions today than in the past. There really aren’t more, but rather we hear about or see the eruptions much faster. With the network of webcams and the peering eyes of satellites, almost no volcano can erupt on the planet and we not notice. So, fear not, volcanism isn’t on the rise but our ability to see the action live is. Check out the list below of volcano webcams, sorted by geographic location. Last updated April 2, 2015. Pacific Hawai’i (United States) Mariana Islands (United States) Anatahan – info – webcamPagan – info – webcam Western/Southern Pacific New Zealand Kermadec Islands (monitoring administered by GNS New Zealand) Russia. Logarithmic scale and patterns. Richter Scale.

Tectonics. Geography Lesson: Predicting Volcanic Eruptions. Seismic Education Site: UPSeis. UPSeis (pronounced "up size") is a program created to teach young people (and not-so-young people) more about the planet we live on and how it works. 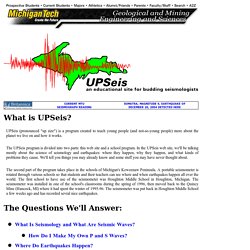 The UPSeis program is divided into two parts: this web site and a school program. In the UPSeis web site, we'll be talking mostly about the science of seismology and earthquakes: where they happen, why they happen, and what kinds of problems they cause. We'll tell you things you may already know and some stuff you may have never thought about. The second part of the program takes place in the schools of Michigan's Keweenaw Peninsula. A portable seismometer is rotated through various schools so that students and their teachers can see where and when earthquakes happen all over the world. This site was originally created by:Michele M. What Should I Do Before, During, And After An Earthquake? Fact or Fiction: Earthquakes. Pangea The History of the Continents. 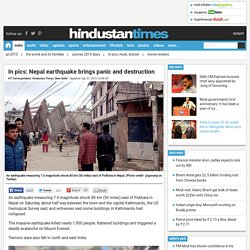 (Reuters) An injured man receives treatment outside the Medicare Hospital in Kathmandu. (AP Photo) Nepalese health workers carry injured people into an open area. (AFP Photo) Rescue workers remove debris at Durbar Square. A house collapsed in Siliguri after the earthquake. A girl breaks down in Lucknow after the earthquake. Rescuers clear the debris at Durbar Sqaure after the earthquake in Kathmandu. 7.9-magnitude earthquake struck east of Pokhara in Nepal, causing widespread damage to buildings in the capital Kathmandu and injuring dozens across the country. The epicentre of the massive quake was 80km (50 miles) east of Pokhara in Nepal, about half way between the town and the capital Kathmandu, the US Geological Survey said. The quake was followed by at least four aftershocks ranging in magnitude from 6.6 to 4.8, the USGS said.

A building collapses in Jalpaiguri distrcit, Bengal. Injured peopel are being rushed for treatment in Nepal. The Science Behind The Nepal Earthquake. Volcanoes - Earth Facts and Information. There are many volcanoes that have been dormant for a lot longer than that and yet they could be some of the most dangerous if they were ever to explode. 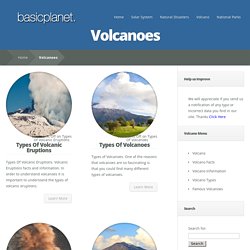