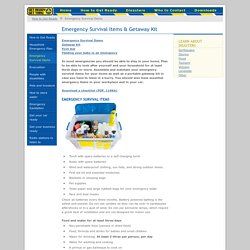 Plan to be able to look after yourself and your household for at least three days or more. Download a checklist (PDF, 119Kb) Torch with spare batteries or a self-charging torchRadio with spare batteriesWind and waterproof clothing, sun hats, and strong outdoor shoes.First aid kit and essential medicinesBlankets or sleeping bagsPet suppliesToilet paper and large rubbish bags for your emergency toiletFace and dust masks Check all batteries every three months. Food and water for at least three days Non-perishable food (canned or dried food)Food, formula and drinks for babies and small childrenWater for drinking. Check and replace food and water every twelve months. In some emergencies you may need to evacuate in a hurry.

Earthquake - be prepared. Earthquakes are caused by movement of the tectonic plates that make up the outer layer of the Earth. 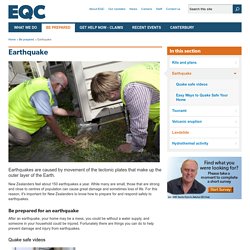 New Zealanders feel about 150 earthquakes a year. While many are small, those that are strong and close to centres of population can cause great damage and sometimes loss of life. For this reason, it's important for New Zealanders to know how to prepare for and respond safely to earthquakes. Earthquake - before, during and after. Before an earthquake. 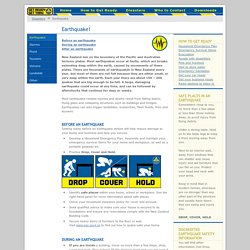 Earthquake FAQ - Earthquake. How do we measure earthquakes? How Are Earthquakes Measured? The familiar Richter scale (which is not a physical device but rather a mathematical formula) is no longer widely used by scientists or the media to report an earthquake's size. 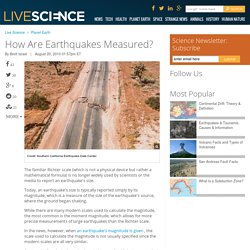 A network of geological monitoring stations, each with instruments that measure how much the ground shakes over time called seismographs allow scientists to calculate an earthquake's time, location and magnitude. Great: Magnitude is greater than or equal to 8.0. Got a question? How Are Earthquake Magnitudes Measured? Unfortunately, many scales, such as the Richter scale, do not provide accurate estimates for large magnitude earthquakes. 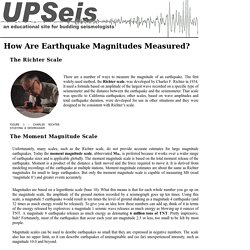 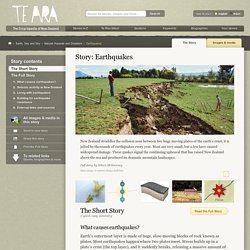 Earth’s outermost layer is made of huge, slow-moving blocks of rock known as plates. Most earthquakes happen where two plates meet. Stress builds up in a plate’s crust (the top layer), and it suddenly breaks, releasing a massive amount of energy. – Earthquakes. Earthquakes happen every day in New Zealand. 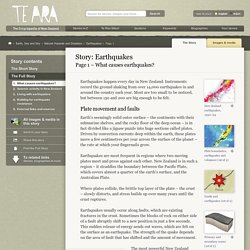 Instruments record the ground shaking from over 14,000 earthquakes in and around the country each year. Most are too small to be noticed, but between 150 and 200 are big enough to be felt. Plate movement and faults Earth’s seemingly solid outer surface – the continents with their submarine shelves, and the rocky floor of the deep ocean – is in fact divided like a jigsaw puzzle into huge sections called plates. Driven by convection currents deep within the earth, these plates move a few centimetres per year across the surface of the planet – the rate at which your fingernails grow.

Earthquakes / Natural Hazards / Our Science / Home - GNS Science. Every year, thousands of earthquakes occur in New Zealand that are too small to be felt. 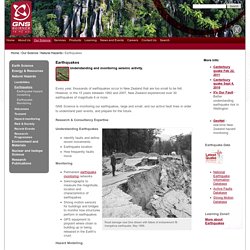 However, in the 15 years between 1992 and 2007, New Zealand experienced over 30 earthquakes of magnitude 6 or more. GNS Science is monitoring our earthquakes, large and small, and our active fault lines in order to understand past events, and prepare for the future. Research & Consultancy Expertise Road damage near Dee stream with failure of embankment fill. Inangahua earthquake, May 1968. Understanding Earthquakes. Plate tectonics animation. What is an earthquake and what causes them to happen? An earthquake is caused by a sudden slip on a fault. 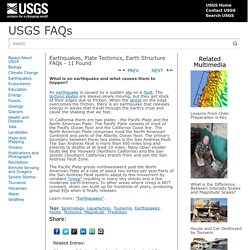 The tectonic plates are always slowly moving, but they get stuck at their edges due to friction. Earthquakes / Hot topics / Themes. As aftershocks continue in the Wellington and Central NZ Regions following with earthquakes, it would be a good time to look at this topic and understand what we all need to do in the event of a big one. 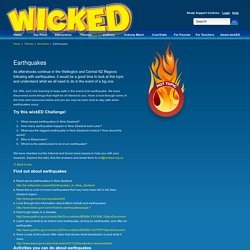 Ed, Wiki, and I are learning to keep safe in the event of an earthquake. We have discovered some things that might be of interest to you. When solid ground is shaken to mush - Science. Large tracts of silty, low-lying land compounded the effects of Saturday's earthquake in Canterbury, as whole streets were transformed from firm land to sludge. In what's known as liquefaction, Christchurch's sandy soil was shaken violently, causing water to rise through its pores.

Scientists compared it to jumping on wet sand at the beach - it soon turns to a murky soup. Professor Michael Pender from the University of Auckland geology department said the Canterbury quake was one of the most significant cases of liquefaction in New Zealand history. He said the process could affect any town or city near a river, estuary or coastline.

Auckland's waterfront, built on reclaimed land from the Ferry Building up to Shortland St, would be very vulnerable to large tremors. Coastal developments which encroached on sand dunes, such as Mt Maunganui and some North Shore beaches, were also susceptible during a major earthquake. Map: Where the land shook KEY: (How to read the map) - NZ Herald. Earthquake Glossary - liquefaction. Seismic Waves. Animated guide: Earthquakes. How Earthquakes Trigger Tsunamis - Bang Goes The Theory, Preview - BBC One. How earthquakes generate tsunamis. Examine animations of fault motion. Why do Some Earthquakes Cause Tsunamis When Others Don't? Damage caused by the 2011 Japanese tsunami. Photo by Tamaki Seto In the past decade, the devastating impact of major tsunamis has made the news on a number of occasions, most notably the 2011 Japanese tsunami and the notorious Boxing Day tsunami of 2004.

But the earth experiences very many earthquakes each day, and each year sees on average around 15 major earthquakes of at least magnitude 7 (M7.0) and one of ≥M8.0 – and in this context, damaging tsunamis are few. As a reader asked recently, why aren’t we seeing more tsunamis, even when there are pretty big earthquakes? What Causes a Tsunami? Earthquakes & Tsunamis: Causes & Information. Almost every year, a large earthquake occurs somewhere in the world and captures the public's attention. Meanwhile, every day thousands of smaller tremors often go unnoticed by most people. Although we usually consider the ground to be solid and stable, the earth is, in fact, constantly shifting under our feet. Canterbury earthquake facts and figures. 29 November 2010 What are earthquakes? New Zealand lies on the boundary of the Pacific and Australian tectonic plates.

Tectonic plates are large plates of rock, about 100km in thickness, that make up the foundation of the earth's crust and the shape of the continents (like pieces of a giant jigsaw puzzle). There are ten major plates and many more minor ones. These plates are in constant motion, travelling at a few centimetres per year. Tension builds up as they scrape over, under or past each other.