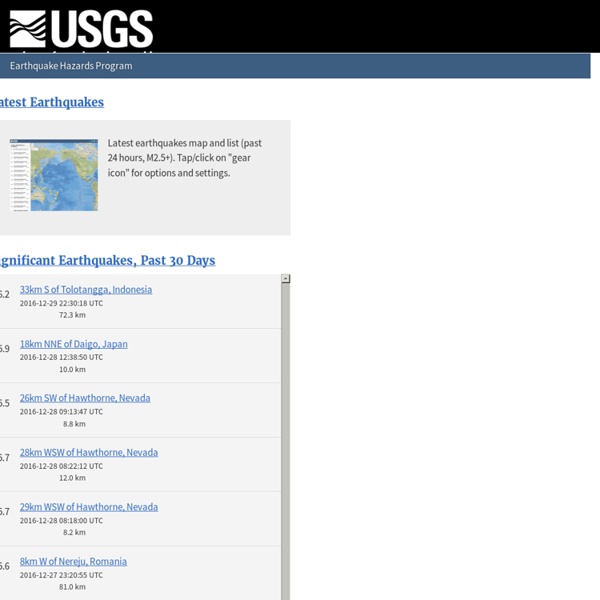 Slip Slide Collide Saving Setrus Would you intervene in a conflict? Should you? Play the game to save... Scotland's future As Scotland's big decision nears, we put the debate in context Maps and Mapping Resources - Geography - US Census Bureau Maps Census Data Mapper The Census Data Mapper is a web mapping application intended to provide users with a simple interface to view, save and print county-based demographic maps of the United States.

OpenStreetMap Where is this? Reverse Directions Welcome to OpenStreetMap! OpenStreetMap is a map of the world, created by people like you and free to use under an open license. Hosting is supported by UCL, Bytemark Hosting, and other partners. The Global Earthquake Explorer General Info GEE is an education and outreach tool for seismology that aims to make it easy for non-seismologists to retrieve, display and analyze seismic data. It is intended for use in a classroom setting as a supplement to textbook material, which often lacks real world connections. Novices to the world of seismology can use GEE to explore earthquakes they've seen in the headlines, keep track of a recording station in their area, look at real-time seismic data, and more!

Flightradar24.com - Live Flight Tracker! In order to save data consumption Flightradar24 web page times out after 30 minutes. Please reload the web page to get another 30 minutes. or get a Flightradar24 Premium subscription and Flightradar24.com will not time-out again! Waveforms from the HVO Seismic Network What's New The latest version of Volcweb was launched December 20, 2013. Based on feedback from our users (you), we have made the following adjustments: Google Map Maker Google Map Maker officially closed on March 31, 2017, and many of its features are being integrated into Google Maps. Since 2008, the Google Map Maker community has edited and moderated millions of features to improve the Google Maps experience. To make it easier for all Google Maps users to contribute changes to the map, we’ve started to graduate functionality from Map Maker to Google Maps on both desktop and mobile. Key editing features currently available in Google Maps include:

10 Dumbest Google Maps Fails Image via Googlesystem Google is as essential and ubiquitous in our lives today as mammoths were to our early ancestors. Hopefully our childrens childrens children will not find Google employees frozen in the Siberian ice. If they do, however, it will be because Google Maps led them there on the way to Rio. And if they do ever manage to unthaw one of these people-sicles, you can bet the newly unfrozen former employee of the big G will gasp out: Walking directions are in Beta! Join us as we take a " ahem, circuitous " tour of the ten dumbest Google Maps fails. Categorize markers with MarkerClusterer - Google Maps Playground Map Data Map data ©2014 Google, INEGI category: Map

Too Many Markers! - API Google Карт Luke Mahe and Chris Broadfoot, Google Geo APIs TeamDecember 2010 Introduction Some applications are required to display a large number of locations or markers. Despite the v3 JavaScript API's significant improvement to performance, naively plotting thousands of markers on a map can quickly lead to a degraded user experience. Too many markers on the map cause both visual overload and sluggish interaction with the map.

Стилизованные карты - JavaScript API Google Карт (версия 3) Using a styled map, you can customize the presentation of the Google base maps, changing the visual display of such elements as roads, parks, and built-up areas. Hint: You can use styling to prevent businesses, points of interest and other features from appearing on the map. See the sample for hiding map features with styling. Example The following example styles the map in night mode, using colors that are useful for situations such as giving directions in the dark. OpenHeatMap Gallery How the US unemployment rate has varied over the last five years, county-by-county and month-by-month Map friends and followers and search terms around the world House prices for different neighborhoods in Boulder, Colorado A view of over 1,000 data sets from the World Bank, covering health, economic and social statistics for the last fifty years on countries around the world The US Presidential election results by state, starting in 1868