Explosive lava stream from Hawaii volcano. Why a Volcano Has Erupted Almost Every Hour for 94 Years. Almost like church bells or a clock tower, a town in the western highlands of Guatemala has been able to practically tell the time by the regular eruptions of a local volcano. 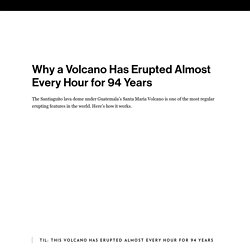 In the town of Quetzaltenango, volcanic eruptions have occurred so frequently that they have nearly marked every passing hour of every day for 94 years. The source: Santiaguito, one of the world’s most active lava-dome complexes, which is situated at the base of the stratovolcano Santa Maria. The complex formed about 20 years after a massive explosion in 1902. “[Since then], almost continuous minor explosions have accompanied the growth of the Santiaguito,” says Stephanie Grocke, a National Geographic Explorer and volcanologist. “There has not been an extensive period of time since 1922 when Santiaguito was quiet.” Where, and When, Will the Next Volcano Erupt? Volcanic eruptions are among nature’s biggest, most deadly spectacles. 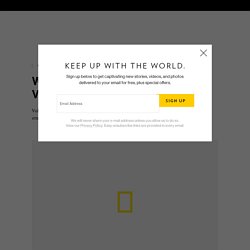 But determining when one of Earth’s 1,500 potentially active volcanoes might blow is both difficult and costly. Scottish physicist and volcanologist Andrew McGonigle has spent the better part of two decades trying to improve the odds of forecasting eruptions. On average, an eruption occurs 50 times a year. Collectively, they've killed thousands of people since 1980, displaced or injured thousands more, and caused widespread economic and environmental losses. McGonigle’s research has focused largely on adapting and refining technology that could lessen the havoc of volcanic blasts. Volcanic detective work centers on sensing techniques and on improving the 1970s-era correlation spectrometer, used to monitor sulphur dioxide levels. Deployed in 25 countries so far, the ultraviolet spectrometers detect and image volcanic plumes by measuring background light absorbed by volcanic gases.

What 50 Years of Earthquakes and Volcanic Eruptions Look Like. Has a violent heartbeat. 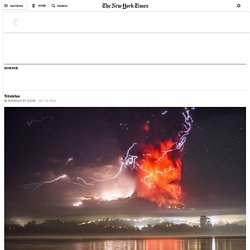 We feel it whenever the ground quakes and volcanoes erupt. These devastating events, which kill thousands of people and affect millions more every year, may seem like random acts of nature. But when you watch them over a long time scale, a pattern emerges. A new interactive app released Thursday shows more than 50 years’ worth of earthquakes and eruptions occurring across the globe. The blue dots represent strong quakes (5 on the Richter scale and above), and the red triangles mark volcanic blasts.

Volcano insight: Fifty years of eruptions revealed. Half a century of the planet's volcanic eruptions and earthquakes have been visualised in an animated app. 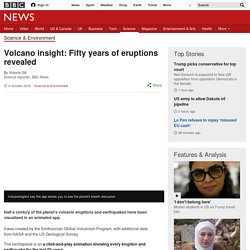 It was created by the Smithsonian Global Volcanism Program, with additional data from NASA and the US Geological Survey. Japan's Sakurajima volcano due for major eruption within 30 years, say scientists. Image copyright Kyodo News/AP One of Japan's most active volcanoes is due for a major eruption within the next 30 years, say scientists who have studied a build-up of magma there. 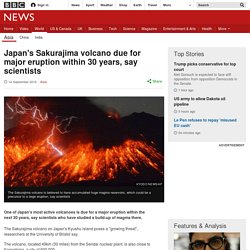 The Sakurajima volcano on Japan's Kyushu island poses a "growing threat", researchers at the University of Bristol say. The volcano, located 49km (30 miles) from the Sendai nuclear plant, is also close to Kagoshima, a city of 600,000. Sakurajima's last deadly eruption was in 1914, when 58 people died. The Japanese archipelago, which sits on the Pacific "Ring of fire", has more than 100 volcanoes. It is closely monitored by Japanese authorities and one of two volcanoes at Level 3 out of 5 levels in Japan's volcanic warning system, which means that people are warned not to to approach the volcano.

"The 1914 eruption measured about 1.5km cubed in volume," said the study's lead author Dr James Hickey, who has now joined the University of Exeter's Camborne School of Mines. Image copyright PA. Future - The bold and controversial plan to drill into a supervolcano. Stefano Carlino descends underground, into a deep pit occupied by what looks like a heavy-duty fire hydrant: a wellhead. 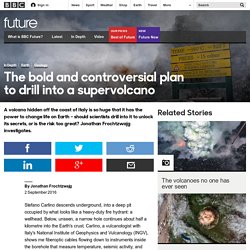 Below, unseen, a narrow hole continues about half a kilometre into the Earth's crust. Carlino, a vulcanologist with Italy's National Institute of Geophysics and Vulcanology (INGV), shows me fiberoptic cables flowing down to instruments inside the borehole that measure temperature, seismic activity, and stress. Volcano erupts on French island of Réunion – video. Eyjafjallajokull - A Geography Case Study. Iceland volcano: Katla may erupt after quakes. The volcano, which stands at 1,500 meters (nearly 5,000 feet) tall, hasn't had a major eruption since 1918. 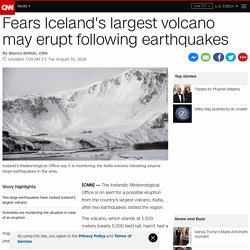 Scientists say Katla usually erupts once every 50 years. Two magnitude 4.5 earthquakes shook the area early Monday morning. The meteorological office confirmed an increase in seismic activity in recent weeks and said it was monitoring the situation. An eruption is not imminent, scientists said, but they can't rule it out. "Such summertime increases in seismicity are common at Katla and the ongoing activity within the caldera is similar to summertime unrest observed in 2012 and 2014," the office said. "Measurements around Katla are not detecting signs of increased ground deformation or seismic tremor, both of which could be indicators of magma movement. " Tourists flock to Kilauea Volcano lava streams. Home : Volcanoes and Climate. Erupting Volcano Lets Scientists Watch Rare Caldera Collapse.

As gateways to the seething-hot heart of our planet, volcanoes are feared for their occasionally cataclysmic behavior. 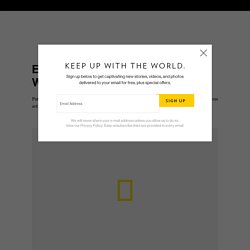 From Vesuvius to Krakatau, some of the most devastating eruptions in human memory have one calamitous factor in common: caldera collapse. Usually rapid and unannounced, only seven known collapses have occurred since the start of the 20th century, and scientists have been puzzling over the mechanism behind these events for more than a hundred years. So when the massive Bárðarbunga volcano in Iceland’s remote southeastern interior started demonstrating caldera formation in slow motion, researchers had an unprecedented opportunity to better understand the process.