Volcano Facts for Kids. Your chances of being involved in a volcanic eruption are pretty low compared to other natural disasters, such as flooding or earthquakes. 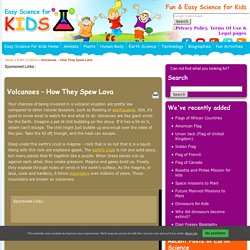 Still, it’s good to know what to watch for and what to do. Volcanoes are like giant vents for the Earth. Imagine a pot of chili bubbling on the stove. If it has a lid on it, steam can’t escape. Volcanoes 101. Volcano Facts. Volcanoes are openings in the Earth’s surface. 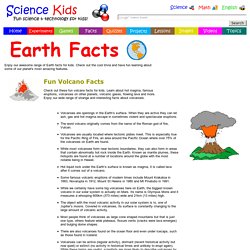 When they are active they can let ash, gas and hot magma escape in sometimes violent and spectacular eruptions. The word volcano originally comes from the name of the Roman god of fire, Vulcan. Volcanoes are usually located where tectonic plates meet. This is especially true for the Pacific Ring of Fire, an area around the Pacific Ocean where over 75% of the volcanoes on Earth are found. While most volcanoes form near tectonic boundaries, they can also form in areas that contain abnormally hot rock inside the Earth.

Types of Volcanoes. Science >> Earth Science for Kids A volcano is an opening in the Earth's crust where hot liquid rock from deep within the Earth, called magma, erupts to the surface. 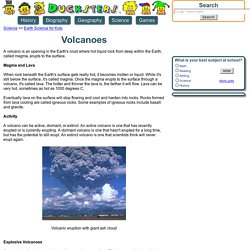 Magma and Lava. How Volcanoes Work. The first question this raises is: what exactly is this "material from the inside"? 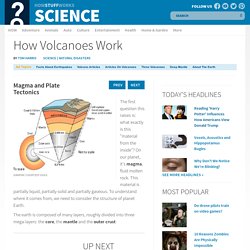 On our planet, it's magma, fluid molten rock. This material is partially liquid, partially solid and partially gaseous. To understand where it comes from, we need to consider the structure of planet Earth. The earth is composed of many layers, roughly divided into three mega-layers: the core, the mantle and the outer crust: We all live on the rigid outer crust, which is 3 to 6 miles (5 to 10 km) thick under the oceans and 20 to 44 miles (32 to 70)thick under the land.

In the 1960s, scientists developed a revolutionary theory called plate tectonics. Where the different plates meet, they typically interact in one of four ways: If the two plates are moving away from each other, an ocean ridge or continental ridge forms, depending on whether the plates meet under the ocean or on land. 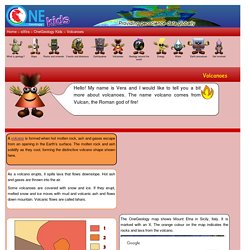 My name is Vera and I would like to tell you a bit more about volcanoes. The name volcano comes from Vulcan, the Roman god of fire! A volcano is formed when hot molten rock, ash and gases escape from an opening in the Earth’s surface. The molten rock and ash solidify as they cool, forming the distinctive volcano shape shown here. Facts about Volcanoes. A volcano is a landform (usually a mountain) where molten rock erupts through the surface of the planet. 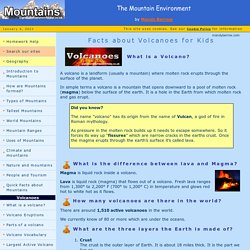 In simple terms a volcano is a mountain that opens downward to a pool of molten rock (magma) below the surface of the earth. It is a hole in the Earth from which molten rock and gas erupt. Magma is liquid rock inside a volcano. Lava is liquid rock (magma) that flows out of a volcano. Fresh lava ranges from 1,300° to 2,200° F (700° to 1,200° C) in temperature and glows red hot to white hot as it flows.

There are around 1,510 active volcanoes in the world. We currently know of 80 or more which are under the oceans. Volcano Facts. 6. 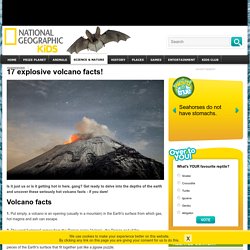 Volcanoes are classified as active, dormant or extinct depending on the amount of volcanic activity happening. 'Active' means there's regular activity, 'dormant' means there's been recent activity but that it's currently quiet and 'extinct', meaning it's been so long since the last eruption that it's unlikely to ever erupt again. Shake, Rattle and Slide. Wiz Kids Volcanoes. Volcanoes (Volcanoes are not associated with weather, but instead are natural disasters.) 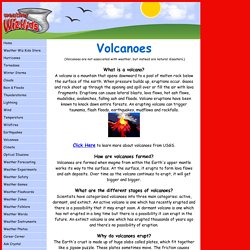 What is a volcano? A volcano is a mountain that opens downward to a pool of molten rock below the surface of the earth. When pressure builds up, eruptions occur. Gases and rock shoot up through the opening and spill over or fill the air with lava fragments. Eruptions can cause lateral blasts, lava flows, hot ash flows, mudslides, avalanches, falling ash and floods. Click Here to learn more about volcanoes from USGS. How are volcanoes formed? What are plate tectonics? Click Here to learn more about plate tectonics and the drifting of our continents.

How many volcanoes are there? What are the different types of volcanoes? What is the difference between lava and magma? Why does lava take a long time to cool down? What is a pyroclastic flow? What is lahar? Volcano Video.