New Zealand Volcanoes. New Zealand has a lot of active volcanoes and a high frequency of eruptions. 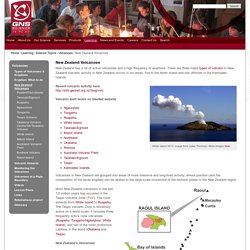 There are three major types of volcano in New Zealand.Volcanic activity in New Zealand occurs in six areas, five in the North Island and one offshore in the Kermadec Islands. White Island 2013. Image from Julian Thomson. More images here. Recent volcanic activity here: Volcanic alert levels on GeoNet website Volcanoes in New Zealand are grouped into areas of more intensive and long-lived activity, whose position (and the composition of the lavas erupted) can be related to the large-scale movement of the tectonic plates in the New Zealand region. Most New Zealand volcanism in the last 1.6 million years has occurred in the Taupo Volcanic Zone (TVZ). New Zealand’s Volcanoes Volcanic Geology and Hazards For detailed information about New Zealand’s volcanic centres and their potential hazards click here. 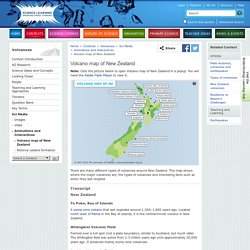 Located north-west of Paihia in the Bay of Islands, it is the northernmost volcano in New Zealand. Whāngārei Volcanic Field Formed over a hot spot (not a plate boundary), similar to Auckland, but much older. Auckland Volcanic Field A volcanic field that covers around 360km2 under Auckland city. Little Barrier Island An extinct andesite cone. Mayor Island Mayor Island last erupted around 500-1000 years ago. White Island. Volcano types. The three main types of volcano are: Cone (mainly andesite) – formed by many eruptions of lava flows and pyroclastic deposits. 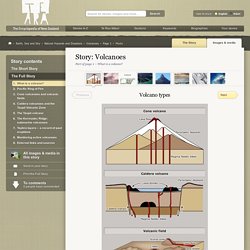 These build up a cone, over hundreds of thousands of years. Ruapehu is a typical cone volcano. Caldera (mainly rhyolite) – a basin formed when a volcano collapses during an eruption. Pyroclastic deposits then build up around it. Volcanic field (mainly basalt) – isolated volcanoes where magma erupts once at the surface. About this item University of Waikato Reference: R. This item has been provided for private study purposes (such as school projects, family and local history research) and any published reproduction (print or electronic) may infringe copyright law.

How to cite this page: New Zealand Volcanoes. A quick, easy summary Read the Full Story What is a volcano? 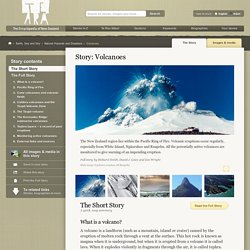 A volcano is a landform (such as a mountain, island or crater) caused by the eruption of molten rock through a vent at the surface. This hot rock is known as magma when it is underground, but when it is erupted from a volcano it is called lava. When it explodes violently in fragments through the air, it is called tephra. The Pacific Ring of Fire: earthquakes and volcanoes The earth is like a giant jigsaw puzzle, made of slowly moving ‘plates’ of rock.

New Zealand lies on the Pacific Ring of Fire, where movement of the Pacific plate causes many earthquakes and volcanoes. Active, dormant or extinct? An active volcano shows signs of unrest (for example, earthquakes) or is currently erupting. A dormant (sleeping) volcano is not currently erupting, but is expected to erupt again – such as Taranaki (Mt Egmont). An extinct volcano has shut off and will not erupt again – for example, Dunedin volcano, which last erupted 11 million years ago. Rotorua caldera formation. Long ago, magma accumulated in the crust beneath the land around what is now Lake Rotorua. 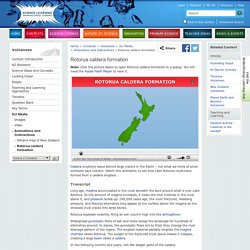 As the amount of magma increases, it heats the rock material in the crust above it, and pressure builds up. 240,000 years ago, the crust fractures, releasing pressure, and fissures kilometres long appear at the surface above the magma as the stressed crust cracks into large blocks. Rotorua explodes violently, firing an ash column high into the atmosphere. Widespread pyroclastic flows of ash and rocks sweep the landscape for hundreds of kilometres around.

In places, the pyroclastic flows are so thick they change the river drainage pattern of the region. The erupted material partially empties the magma chamber below Rotorua. In the following months and years, rain fills deeper parts of the caldera. Dregs of magma continue to reach the surface, and explosive phreatomagmatic activity occurs as magma interacts with water. Taupo Volcano. Lake Taupō, the largest lake in New Zealand, owes its existence and shape to the caldera-forming eruptions of the Taupō volcano – the most frequently active rhyolite volcano in the world. 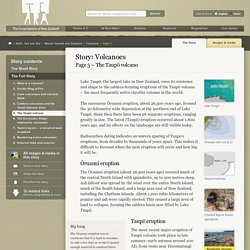 The enormous Ōruanui eruption, about 26,500 years ago, formed the 30-kilometre wide depression at the northern end of Lake Taupō. Since then there have been 28 separate eruptions, ranging greatly in size. The latest (Taupō) eruption occurred about 1,800 years ago, and its effects on the landscape are still visible today. Radiocarbon dating indicates an uneven spacing of Taupo's eruptions, from decades to thousands of years apart. This makes it difficult to forecast when the next eruption will occur and how big it will be. Ōruanui eruption The Ōruanui eruption (about 26,500 years ago) covered much of the central North Island with ignimbrite, up to 200 metres deep.

Big bang The Ōruanui eruption was so enormous that it is hard to visualise. Taupō eruption How to cite this page: