Seimic Waves and Earth’s Interior. The Giant, Underestimated Earthquake Threat to North America. Just over one year ago, a magnitude-9 earthquake hit the Tohoku region of northeastern Japan, triggering one of the most destructive tsunamis in a thousand years. 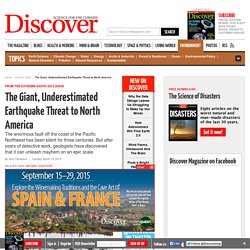 The Japanese—the most earthquake-prepared, seismically savvy people on the planet—were caught off-guard by the Tohoku quake’s savage power. Over 15,000 people died. Now scientists are calling attention to a dangerous area on the opposite side of the Ring of Fire, the Cascadia Subduction Zone, a fault that runs parallel to the Pacific coast of North America, from northern California to Vancouver Island. This tectonic time bomb is alarmingly similar to Tohoku, capable of generating a megathrust earthquake at or above magnitude 9, and about as close to Portland, Seattle, and Vancouver as the Tohoku fault is to Japan’s coast.

What happened in Japan will probably happen in North America. A New Theory About What's Causing Oklahoma's Earthquakes. It's been a shaky last week here in central Oklahoma, following on the heels of a shaky last year -- a record-breaking year, in fact. 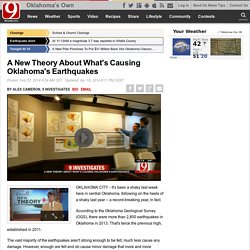 According to the Oklahoma Geological Survey (OGS), there were more than 2,800 earthquakes in Oklahoma in 2013. That's twice the previous high, established in 2011. The vast majority of the earthquakes aren't strong enough to be felt, much less cause any damage. However, enough are felt and do cause minor damage that more and more Oklahomans are clamoring for an explanation as to their cause. Joe and Mary Reneau, who live near Prague, certainly have a passing interest. "Every corner of the house, every corner of every room was fractured," said Joe Reneau. Since then, the couple has read everything they can about Oklahoma's earthquakes. Multiple choice. Multiple Choice Questions for Earthquakes - Chapter 16. 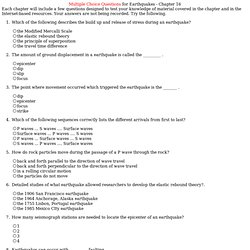 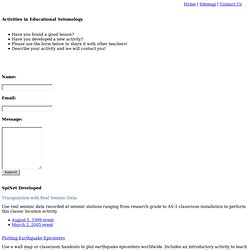 Plotting Earthquake Epicenters Use a wall map or classroom handouts to plot earthquake epicenters worldwide. Includes an introductory activity to teach plotting with latitude and longitude (overheads and student answer sheet included), where to get a wall map and dots to mark the earthquakes, and informational images on earthquake magnitudes and occurrence to put next to your map.

Can Earthquakes be Predicted? Students model fault behavior with a simple slider-block apparatus providing students with valuable insight into the difficulty of earthquake prediction and the complex behavior of Earth systems. Single Station Event Location - Mine Blast! A Comparison of Two Bay Area Earthquakes: 1989 v. 1906. 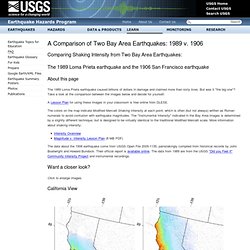 But was it "the big one"? Take a look at the comparison between the images below and decide for yourself. A Lesson Plan for using these images in your classroom is free online from DLESE. The colors on the map indicate Modified Mercalli Shaking Intensity at each point, which is often (but not always) written as Roman numerals to avoid confusion with earthquake magnitudes. The data about the 1906 earthquake come from USGS Open File 2005-1135, painstakingly compiled from historical records by John Boatwright and Howard Bundock. Want a closer look? Click to enlarge images.

California View Bay Area View Animation that flips back and forth between these images: More maps are available directly from the USGS Open File Report. Living in Earthquake Country: DLESE Teaching Box. Videos. Short-segment video lectures to give rudimentary background information on the Earth and plate tectonics to teach how earthquakes happen and how they are studied. 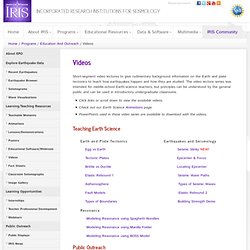 The video lecture series was intended for middle-school Earth-science teachers, but principles can be understood by the general public and can be used in introductory undergraduate classrooms. Click links or scroll down to view the available videos. Check out our Earth Science Animations page. PowerPoints used in these video series are available to download with the videos. Teaching Earth Science. Longitudinal and Transverse Wave Motion. GCSE Bitesize: P and S waves. What Is Seismology and What Are Seismic Waves? Spinet/pdf/2005061_tri.pdf. Activity Triangulating an epicenter.pdf. Activity3-QCN.pdf. Earthguide Online Classroom - Earthquake Triangulation Activity. Spinet/pdf/triangulation.pdf. Virtual Earthquake - An Introduction. What's an earthquake? 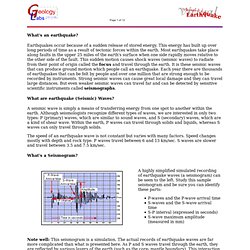 Earthquakes occur because of a sudden release of stored energy. This energy has built up over long periods of time as a result of tectonic forces within the earth. Most earthquakes take place along faults in the upper 25 miles of the earth's surface when one side rapidly moves relative to the other side of the fault. This sudden motion causes shock waves (seismic waves) to radiate from their point of origin called the focus and travel through the earth. It is these seismic waves that can produce ground motion which people call an earthquake. What are earthquake (Seismic) Waves? A seismic wave is simply a means of transferring energy from one spot to another within the earth. The speed of an earthquake wave is not constant but varies with many factors. What's a Seismogram? Note well: This seismogram is a simulation. How is an Earthquake's Epicenter Located?