YouTube. Protecting Art in an Earthquake: Seismic Isolator Technology. How many earthquakes happen every day. How Often Do Earthquakes Occur? Earth is an active place and earthquakes are always happening somewhere. 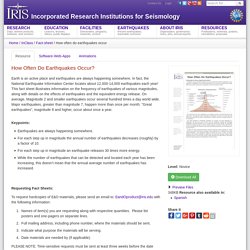 In fact, the National Earthquake Information Center locates about 12,000-14,000 earthquakes each year! This fact sheet illustrates information on the frequency of earthquakes of various magnitudes, along with details on the effects of earthquakes and the equivalent energy release. On average, Magnitude 2 and smaller earthquakes occur several hundred times a day world wide. Major earthquakes, greater than magnitude 7, happen more than once per month. "Great earthquakes", magnitude 8 and higher, occur about once a year. Keypoints: Earthquakes are always happening somewhere.For each step up in magnitude the annual number of earthquakes decreases (roughly) by a factor of 10.

Requesting Fact Sheets: To request hardcopies of E&O materials, please send an email to: EandOproduct@iris.edu with the following information: Names of item(s) you are requesting along with respective quantities. The Ten Largest Earthquakes Since 1900. Animated map: all earthquakes of the past 15 years. Earthquake Magnitude Power Comparison. Everything to Know About Earthquakes. You Should:DROP down onto your hands and knees (before the earthquakes knocks you down). 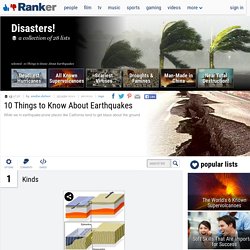 This position protects you from falling but allows you to still move if necessary.COVER your head and neck (and your entire body if possible) under a sturdy table or desk. If there is no shelter nearby, only then should you get down near an interior wall (or next to low-lying furniture that won't fall on you), and cover your head and neck with your arms and hands.HOLD ON to your shelter (or to your head and neck) until the shaking stops. Be prepared to move with your shelter if the shaking shifts it around. You Should NOT:RUN OUTSIDE or to other rooms during shaking: The area near the exterior walls of a building is the most dangerous place to be. Windows, facades and architectural details are often the first parts of the building to collapse. 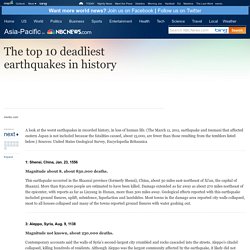 (The March 11, 2011, earthquake and tsumani that affected eastern Japan is not included because the fatalities caused, about 15,000, are fewer than those resulting from the temblors listed below.) Sources: United States Geological Survey, Encyclopedia Britannica 1: Shensi, China, Jan. 23, 1556 Magnitude about 8, about 830,000 deaths. This earthquake occurred in the Shaanxi province (formerly Shensi), China, about 50 miles east-northeast of Xi'an, the capital of Shaanxi.

More than 830,000 people are estimated to have been killed. Damage extended as far away as about 270 miles northeast of the epicenter, with reports as far as Liuyang in Hunan, more than 500 miles away. Types of earthquakes. What are the types of earthquakes? 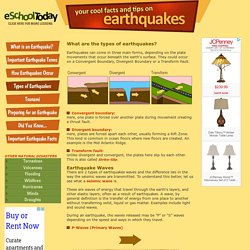 Earthquakes can come in three main forms, depending on the plate movements that occur beneath the earth's surface. They could occur on a Convergent Boundary, Divergent Boundary or a Transform Fault. Convergent boundary: Here, one plate is forced over another plate during movement creating a thrust fault. Divergent boundary: Here, plates are forced apart each other, usually forming a Rift Zone. This kind is common in ocean floors where new floors are created. Transform fault: Unlike divergent and convergent, the plates here slip by each other. Earthquake preparedness Thesis Work. San Andreas Fault Is "Locked, Loaded And Ready To Go," Says Leading Seismologist. Southern California’s section of the immense San Andreas Fault is building towards a catastrophic rupture. 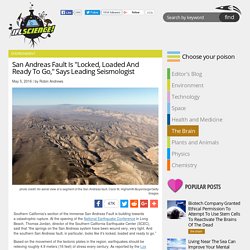 At the opening of the National Earthquake Conference in Long Beach, Thomas Jordan, director of the Southern California Earthquake Center (SCEC), said that “the springs on the San Andreas system have been wound very, very tight. And the southern San Andreas fault, in particular, looks like it's locked, loaded and ready to go.” Based on the movement of the tectonic plates in the region, earthquakes should be relieving roughly 4.9 meters (16 feet) of stress every century. As reported by the Los Angeles Times, the San Andreas fault hasn’t been doing this at all, meaning that over a 100 years’ worth of stress is waiting to be unleashed. The last time the southern section of the fault ruptured was in 1857, when a stretch of 360 kilometers (225 miles) fractured at the surface, causing a magnitude 7.9 earthquake that lasted for three entire minutes.