Volcanic Rocks of Lemnos. The Greek island of Lemnos is the mythic location of the forge of Hephaestus, god of blacksmiths, metallurgy, and all things fire. 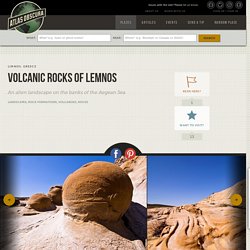 According to legend, Hephaestus landed here after Zeus hurled him off Mount Olympus - and although the fall was a steep one, he could hardly have touched down in a more appropriate spot. The Miocene volcanoes that used to spew lava on these shores are long gone, but they’ve left behind peculiar, entrancing rock formations. The locals call these rocks “faraklo” or “fragokefala” - “bald” or “bald heads” - references to the barren hills and tawny orbs that dot the volcanic landscape. This petrified lava is frozen in all sorts of bizarre shapes, from ripples in the rockface to built-up 3D spirals. Shiprock. Rising high above the surrounding desert, the rock formation known as Shiprock has long been a point of fascination. 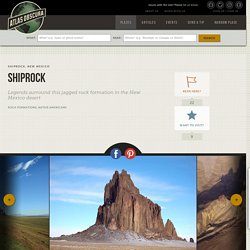 This striking volcanic plume was formed around 30 million years ago, developing as a plug within the vent of an active volcano. 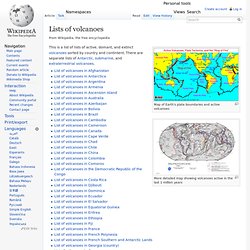 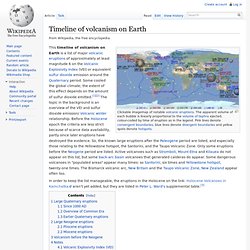 Some cooled the global climate; the extent of this effect depends on the amount of sulfur dioxide emitted.[1][2] The topic in the background is an overview of the VEI and sulfur dioxide emission/ Volcanic winter relationship. Before the Holocene epoch the criteria are less strict because of scarce data availability, partly since later eruptions have destroyed the evidence.

So, the known large eruptions after the Paleogene period are listed, and especially those relating to the Yellowstone hotspot, the Santorini, and the Taupo Volcanic Zone. Only some eruptions before the Neogene period are listed. Active volcanoes such as Stromboli, Mount Etna and Kilauea do not appear on this list, but some back-arc basin volcanoes that generated calderas do appear. Since 1000 AD[edit] Volcano so devastating people ate their own shoes: ISLAND ON FIRE BY ALEXANDRA WITZE AND JEFF KANIPE. By Christopher Hudson PUBLISHED: 18:26 GMT, 20 March 2014 | UPDATED: 16:25 GMT, 25 March 2014 Sparks fly: A violent eruption in Hawaii. 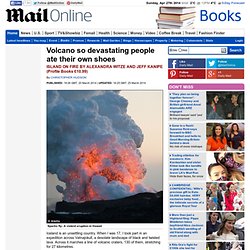 Watch a volcano exploding: Amazing 360 degree interactive panorama shows eruption on the remote Kamchatka peninsula. Russian team creates incredible interactive panorama of the Plosky Tolbachik volcano in the Russian Far EastIt is one of four volcanoes simultaneously erupting on the Kamchatka peninsulaShot from variety of locations, the incredible panorama can be zoomed and panned like Google Street View By Damien Gayle Published: 14:39 GMT, 1 February 2013 | Updated: 17:39 GMT, 1 February 2013 This is the moment a volcano erupted in the snowy wastes of Russia's remote far east. 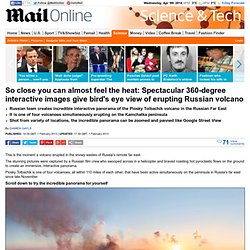 The stunning pictures were captured by a Russian film crew who swooped across in a helicopter and braved roasting hot pyroclastic flows on the ground to create an immersive, interactive panorama. Plosky Tolbachik is one of four volcanoes, all within 110 miles of each other, that have been active simultaneously on the peninsula in Russia's far east since late November. Scroll down to try the incredible panorama for yourself 'The Tolbachik volcano eruption is classified as an unconventional fissure eruption.

Decade Volcanoes. Andean "Sombrero" Uplift Due To Magma. October 12, 2012 Radar data from ERS-1, -2 and Envisat show a central uplift of about 10 mm per year near the Uturuncu volcano (dark red). 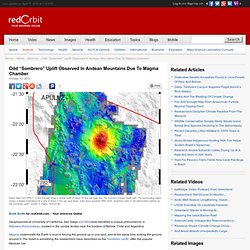 The surrounding region shows a slower subsidence at a rate of about 2 mm per year (blue). Data were acquired 1992–2010. Scientists refer to the deformation pattern as the ‘sombrero uplift’. Credit: Y. Brett Smith for redOrbit.com – Your Universe Online Geophysicists at University of California, San Diego (UCSD) have identified a unique phenomenon in Altiplano-Puna plateau, located in the central Andes near the borders of Bolivia, Chile and Argentina.

Magma underneath the Earth´s crust is forcing the ground up in one spot, and at the same time sinking the ground around it. “It’s a subtle motion, pushing up little by little every day, but it’s this persistence that makes this uplift unusual. Fialko and co-author Jill Pearse said the phenomenon was the result of a diapir, or a blob of magma, that rises to Earth´s crust like heated wax inside a lava lamp. Volcanic Eruption Trigger Identified. October 13, 2012 Lee Rannals for redOrbit.com — Your Universe Online Scientists have identified a trigger for the largest explosive volcanic eruptions on Earth, according to a report published in the journal Scientific Reports. 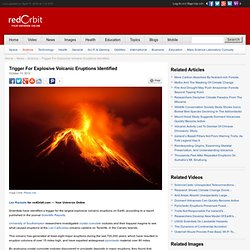 University of Southampton researchers investigated crystal cumulate nodules and their trapped magma to see what caused eruptions at the Las CaÃ±adas volcanic caldera on Tenerife, in the Canary Islands. This volcano has generated at least eight major eruptions during the last 700,000 years, which have resulted in eruption columns of over 15 miles high, and have expelled widespread pyroclastic material over 80 miles. Volcano Photos, Information and Stories.