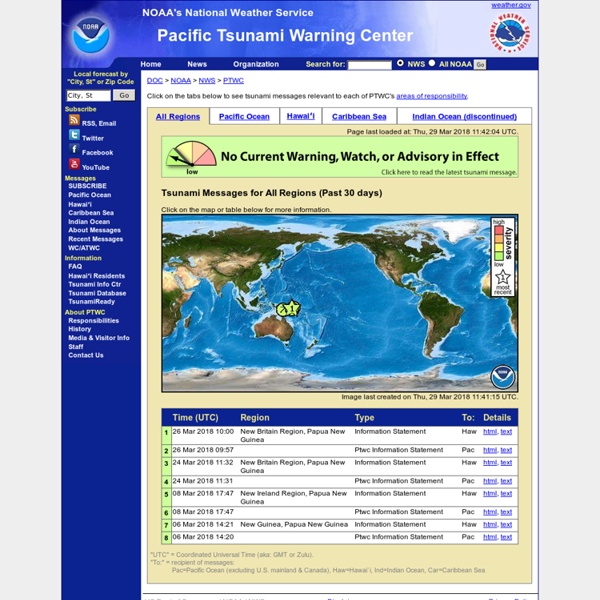 Audioboos from Japan detail the tragedy of the Tsunami As with all breaking news today, social tools like Twitter are showing their strength in getting the breaking news out there about the awful events in Japan. Just as everyone else is, I am glue to Twitter right now to see what’s happening, but reports are coming in via many other means. One of those is Audioboo, which has long had a page of the latest “boos” streaming in from users. Here’s three from Tristan Mathers in Japan just 30 minutes ago who details how phone services are going down and confusion has engulfed the area. The Boo Map, which puts recording on a Google Map, also comes in handy at times like these. Interestingly, since Audioboo is set up for voice reporting, Soundcloud, by contrast, is just not set up for breaking news events, being far more concentrated on music.

Earthquakes make gold veins in an instant : Nature News & Comment Shutterstock Veins of gold, such as this one trapped in quartz and granite, may deposit when the high-pressure water in which they were dissolved suddenly vaporises during an earthquake. Scientists have long known that veins of gold are formed by mineral deposition from hot fluids flowing through cracks deep in Earth’s crust. Powerful quake rocks Japan - Asia-Pacific Hundreds of people are dead after one of the strongest earthquakes ever recorded struck Japan, triggering a devastating 10-metre-high tsunami along parts of the country's northeastern coastline. The massive 8.9-magnitude earthquake struck on Friday afternoon local time, creating gigantic waves which swept away cars, boats, homes and people as the surging water overwhelmed coastal barriers. Widespread fires burned out of control and Japan's nuclear industry was on alert as reactors shut down automatically as a safety precaution. Millions of people are reported to be without electricity, airports are closed and public transport in Tokyo and other cities has come to a halt as Japan reels amid the twin devastations. Police said 200 to 300 bodies have been found in the northeastern coastal city of Sendai where hundreds of buildings have collapsed.

Adam Kokesh and Transvestites, Potheads, Anarchists and Atheists “ I will be praying for Adam Kokesh, for his safety, that God will guide him. ” Those were the final words of my column last week. Despite my prayers, Adam is now in a Federal Detention Center, being held without bail, charged with assaulting a federal officer and resisting arrest. But there’s one problem: I’ve watched several videos of the event (from different angles) and there appears to be no evidence to support the government’s charge.

Tiltmeter - Wikipedia A tiltmeter on Mauna Loa, used to predict eruptions by measuring very small changes in the profile of the mountain. A tiltmeter is a sensitive inclinometer designed to measure very small changes from the vertical level, either on the ground or in structures.[1] Tiltmeters are used extensively for monitoring volcanoes, the response of dams to filling, the small movements of potential landslides, the orientation and volume of hydraulic fractures, and the response of structures to various influences such as loading and foundation settlement. Tiltmeters may be purely mechanical or incorporate vibrating-wire or electrolytic sensors for electronic measurement. A sensitive instrument can detect changes of as little as one arc second. Tiltmeters have a long history, somewhat parallel to the history of the seismometer. The very first tiltmeter was a long-length stationary pendulum.

Japan earthquake - live updates 7.22am: Japan has been rocked by a series of earthquakes causing a major Tsunami. Here's some details from our Japan correspondent, Justin McCurry: A series of powerful earthquakes struck north-east Japan on Friday afternoon, triggering warnings of tsunami as high as 10 metres and shaking buildings in Tokyo.The first earthquake struck at 2:46pm local time and measured magnitude-8.8, according to the US geological survey. Local governments take a hit in Statehouse property tax deal At first sight, a property tax reform deal is like a unicorn. It’s astounding, really. You figured you might not live to see one. But there it is, with enough votes to actually pass the Iowa Senate and House.