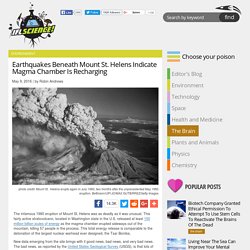 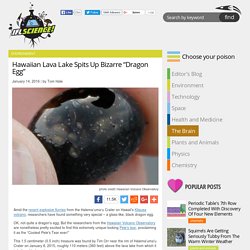 OK, not quite a dragon’s egg. But the researchers from the Hawaiian Volcano Observatory are nonetheless pretty excited to find this extremely unique-looking Pele’s tear, proclaiming it as the “Coolest Pele's Tear ever!” This 1.5 centimeter (0.5 inch) treasure was found by Tim Orr near the rim of Halema'uma'u Crater on January 8, 2015, roughly 110 meters (360 feet) above the lava lake from which it is believed to have been spat from. These glassy deposits are often spewed from volcanos and their lava lakes, but it’s rare to find one in this oval shape.

They are formed when molten lava is ejected in a volcanic fountain and then cools extremely quickly. World's Ten Most Dangerous Volcanoes Identified. The Earth is peppered with volcanoes, and for the most part, they aren’t dangerous. 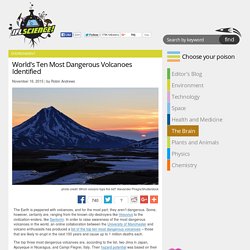 Some, however, certainly are, ranging from the known city-destroyers like Vesuvius to the civilization-enders, like Santorini. G-EVER Hazard Information System. OneGeology is a project to make web-accessible the best available geological map data worldwide. 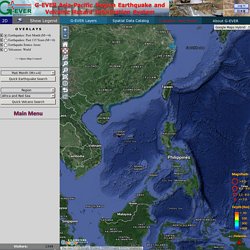 It is a voluntary initiative of the geological surveys of the world providing the resources from their own budgets. The project aims to make existing geological data worldwide in whatever format web accessible. It also aims to encourage transfer of know-how about Open Geospatial Consortium (OGC) based web services and other technologies to those participating countries that need technical assistance and stimulate a rapid increase in interoperability. OneGeology Asia project was started after representatives from the Geological Survey of Japan (GSJ), AIST and Coordinating Committee of Geosciences Programmes in East and Southeast Asia (CCOP) attended the OneGeology workshop in Brighton, UK in March 2007. Mountain Maker, Earth Shaker. Vast Magma Chambers Detected Beneath Mount St. Helens. The 1980 eruption of Mount St. 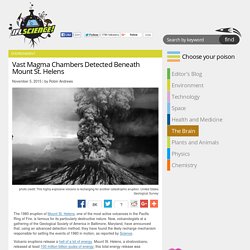 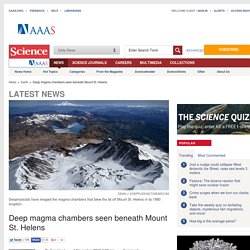 Helens, the most active volcano in the Pacific Northwest. The emerging picture includes a giant magma chamber, between 5 and 12 kilometers below the surface, and a second, even larger one, between 12 and 40 kilometers below the surface. 'Dark magma' could explain mystery volcanoes. The magma fueling the volcanoes of Hawaii and Yellowstone National Park pipes up from deep inside the planet. 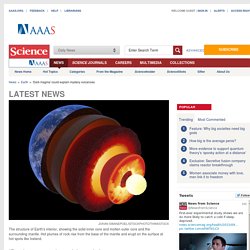 Scientists have struggled to understand why there are hot spots there, so far from the grinding tectonic plate boundaries at which volcanoes normally appear. New research chalks the mystery up to “dark magma”: deep underground pockets of red-hot molten rock that siphon energy from Earth’s core. “It’s a very provocative paper … a bit speculative,” says Thomas Duffy, a geoscientist at Princeton University who was not involved with the study.

“But it’s taking us in an important step on the road to understanding the deep Earth.” Most volcanoes form because tectonic plates, vast sections of Earth’s crust, smash against or slide underneath each other. Watch A Man Walk On Lava. So as well all know, lava has a tendency to annihilate everything and anything that’s stupid enough to get in its path. 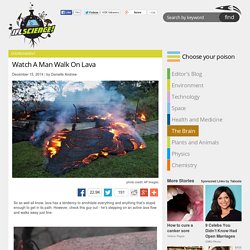 However, check this guy out - he's stepping on an active lava flow and walks away just fine. Alex Rivest There are various types of lava, and this type is called “pāhoehoe” (pronounced pah-hoy-hoy). Newly Emerged Pacific "Island" Photographed For The First Time. With so many South Pacific islands sinking beneath the waves, it's nice to see the land striking back now and then. 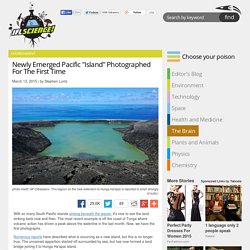 The most recent example is off the coast of Tonga where volcanic action has driven a peak above the waterline in the last month. Now, we have the first photographs. Numerous reports have described what is occurring as a new island, but this is no longer true. The unnamed apparition started off surrounded by sea, but has now formed a land bridge joining it to Hunga Ha'apai island.

Credit:CNES/Airbus. The new land rises to 250 meters (820 feet) and is approximately 2 kilometers (1.3 miles) across, making it substantially larger and higher than the existing part of Hunga Ha'apai. Credit GP Orbassano. However, GP Orbassano, who took the photographs on a trip to the island with two friends, hopes its size will be enough to maintain it long enough to become a tourist attraction.

Lava Flow In Hawaii Incinerates Its First House. A stream of red-hot lava that has been slowly slithering out of Hawaii’s Kilauea volcano for months has just consumed a house in only 45 minutes. 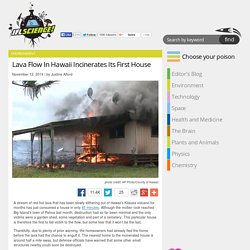 New Lava Lake Appears Atop African Volcano. Deep within a crater at the summit of one of Africa’s most active volcanoes, shrouded by clouds of toxic gas, a bubbling lava lake has sprung into being for the first time in 75 years. The new lava lake is atop the Democratic Republic of the Congo’s Nyamuragira volcano. This young volcano is part of a chain of eight mountains in the Albertine Rift, the Virunga Volcanoes, which line the borders of Uganda, Rwanda and the Democratic Republic of Congo (DR Congo). Only Nyamuragira and another equally young volcano within this range, Nyiragongo, are active. Together, they account for 40% of all volcanic eruptions in Africa. Twelve years ago, an eruption from Nyiragongo destroyed one third of a nearby city.