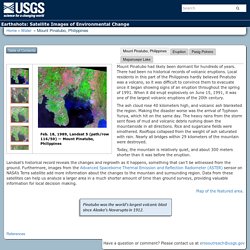 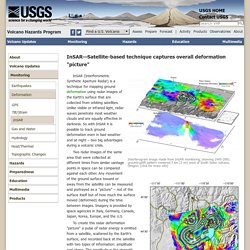 (click for more info) Yellowstone ground movement map from Sept 2004 - Aug 2006. InSAR (Interferometric Synthetic Aperture Radar) is a technique for mapping ground deformation using radar images of the Earth's surface that are collected from orbiting satellites. Unlike visible or infrared light, radar waves penetrate most weather clouds and are equally effective in darkness. So with InSAR it is possible to track ground deformation even in bad weather and at night – two big advantages during a volcanic crisis. Two radar images of the same area that were collected at different times from similar vantage points in space can be compared against each other.

How Old is "Cinder Cone"?—Solving a Mystery in Lassen Volcanic Park, California. U.S. 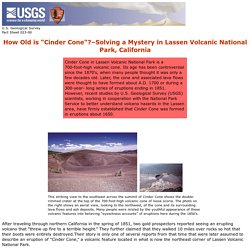 Geological Survey Fact Sheet 023-00 How Old is "Cinder Cone"? –Solving a Mystery in Lassen Volcanic National Park, California After traveling through northern California in the spring of 1851, two gold prospectors reported seeing an erupting volcano that “threw up fire to a terrible height.” They further claimed that they walked 10 miles over rocks so hot that their boots were entirely destroyed.Their story is only one of several reports from that time that were later assumed to describe an eruption of “Cinder Cone,” a volcanic feature located in what is now the northeast corner of Lassen Volcanic National Park.

USGS SIM 2899: Photographs. ‘Survived by a miracle’ — watch this boat full of tourists narrowly escape the erupting Stromboli volcano. This widely-shared video shows the moments of panic aboard a boat carrying tourists as it was almost overwhelmed by a volcanic cloud after the Stromboli eruption in Italy on Wednesday. 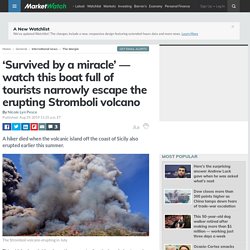 Poster Elena Schiera, 19, shared clips of what she described as “moments of panic” after the volcano erupted on the island off the coast of Sicily just after noon. Italian emergency services described the eruption as a “strong intensity” blast that sent flaming lava down the volcano’s slopes and into the Tyrrhenian Sea, which started widespread fires. It also spewed a plume of smoke, rock, ash and other volcanic material up to 1.2 miles into the sky and barreled toward this boat. Schiera’s caption beneath her terrifying images translates as “Stromboli volcano eruption at 12:17 p.m. .. survived by a miracle… moments of panic.” ‘Shell-Shocked’ in Hawaii: How Lava Overran a Neighborhood.

NASA Shows New Tongan Island Made of Tuff Stuff. In late December 2014, a submarine volcano in the South Pacific Kingdom of Tonga erupted, sending a violent stream of steam, ash and rock into the air. 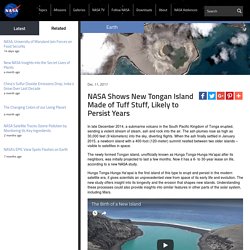 Crater Lake : Image of the Day. Untitled. Pouring Lava Melting a batch of the ancient basalt takes about four hours, but we hold the lava above its melting point for much longer to ensure that it is completely melted and to remove unwanted volatiles such as water. 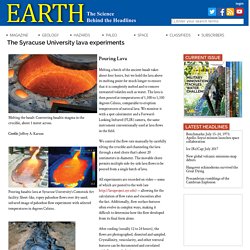 The lava is then poured at temperatures of 1,100 to 1,350 degrees Celsius, comparable to eruption temperatures of natural lava. Lava Flow on Volcán de Fuego. Exploding Lakes in Cameroon. Fs172 96. Mauna Kea (“White Mountain”) is the only volcano on the island of Hawaii that has evidence of glaciation. 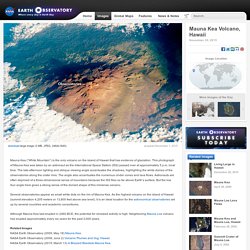 This photograph of Mauna Kea was taken by an astronaut as the International Space Station (ISS) passed over at approximately 5 p.m. local time. The late-afternoon lighting and oblique viewing angle accentuates the shadows, highlighting the white domes of the observatories along the crater rims. The angle also accentuates the numerous cinder cones and lava flows.

Volcanic Island in the Pacific Turns Two. Volcano Webcams of the world - interactive viewer including live seismograms. All the World's Volcano Webcams. Volcano Simulator. Volcanoes and Magma A volcano is an opening where magma erupts onto the surface as lava after rising from deep within the Earth. 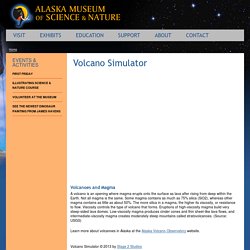 By Lexi Krock Posted 11.12.02 NOVA What's the difference between lava and magma? 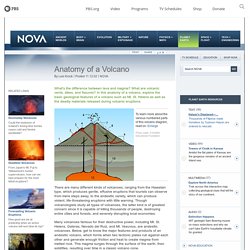 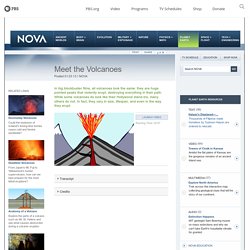