The Really Big One. When the 2011 earthquake and tsunami struck Tohoku, Japan, Chris Goldfinger was two hundred miles away, in the city of Kashiwa, at an international meeting on seismology.

As the shaking started, everyone in the room began to laugh. Earthquakes are common in Japan—that one was the third of the week—and the participants were, after all, at a seismology conference. Then everyone in the room checked the time. Seismologists know that how long an earthquake lasts is a decent proxy for its magnitude. The 1989 earthquake in Loma Prieta, California, which killed sixty-three people and caused six billion dollars’ worth of damage, lasted about fifteen seconds and had a magnitude of 6.9.

When Goldfinger looked at his watch, it was quarter to three. It was March. Oh, shit, Goldfinger thought, although not in dread, at first: in amazement. For a moment, that was pretty cool: a real-time revolution in earthquake science. Just north of the San Andreas, however, lies another fault line. But it did not. Tsunami warning: White House gets ready for the 'Big One' to strike. The White House Earthquake Resilience Summit will be streamed live on the internet iat 5.30pm. 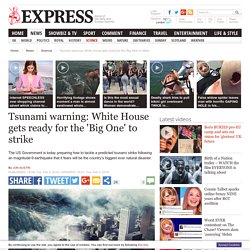 Click back on this story to watch the video. Emergency response officials are preparing how to deal with a magnitude-9 undersea earthquake which they expect will be triggered by the Cascadia fault line. Experts have know there is a very real threat of the quake, but have only now begun planning the response in earnest. The White House said a new commitment to develop an earthquake early-warning system for the US will be announced at today's summit.

The fault line lies in the Cascadia Subduction Zone, which is seventy miles off America's Pacific Northwest and stretches all the way from Vancouver Island to Northern California. It is a seismic activity hotspot area where a massive quake has historically happened on average every 240 years. But scientists, who warn that more needs to be done to prepare for the impending disaster, say the last one was 315 years ago -so it is 75 years overdue.

Earthquakes in last 24hrs. Real-time Earthquake Map. Pacific Tsunami Warning Center. Massive Earthquakes Will Continue In Himalayas. December 31, 2012 Brett Smith for redOrbit.com – Your Universe Online An international team of researchers has found that a pair of massive, historical earthquakes ruptured the surface in the central Himalayas–leading them to theorize that similar quakes will threaten the region´s population in the future. 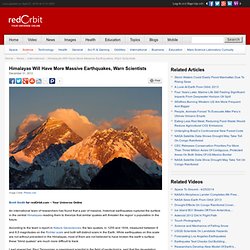 According to the team´s report in Nature Geosciences, the two quakes, in 1255 and 1934, measured between 8 and 8.5 magnitudes on the Richter scale and both left distinct scars in the Earth. While earthquakes on this scale are not without precedent in the Himalayas, most of them are not believed to have broken the earth’s surface; these “blind quakes” are much more difficult to track. Japan tsunami 2011 video: Horrifying footage charts total destruction of a town. By Daily Mail Reporter Published: 20:33 GMT, 13 August 2013 | Updated: 22:54 GMT, 13 August 2013 Newly-discovered video footage shows the terrifying speed and immense destructive force of the 2011 Japanese Tsunami as it engulfs a small town before sparking a devastating fire. 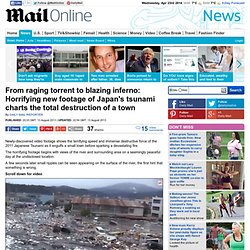 The horrifying footage begins with views of the river and surrounding area on a seemingly peaceful day at the undisclosed location. A few seconds later small ripples can be seen appearing on the surface of the river, the first hint that something is wrong. Scroll down for video Newly-emerged video shows the terrifying speed and force with which the 2011 Japanese Tsunami destroyed a town But the ripples gradually build into a large wave and as the water level rises higher and higher the river is transformed into a raging torrent. At this point the cameraman decides to climbs up onto the balcony of a nearby block of flats - a decision that probably saved his life. Norwegian 'seiches' freak waves linked back to the 2011 Japan earthquake. The waves, known as seiches, can occur in any landlocked body of waterThey are sometimes triggered by earthquakes thousands of miles awayThis is the first known recording of Norwegian seiches caused by an earthquake for over half a century By Ellie Zolfagharifard Published: 17:20 GMT, 19 August 2013 | Updated: 17:44 GMT, 19 August 2013 When 5ft waves were suddenly seen rising from the Aurland-Flåm fjord in Norway, locals were terrified. 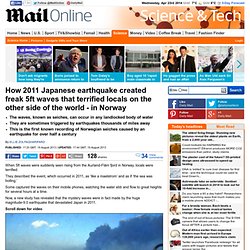 They described the event, which occurred in 2011, as ‘like a maelstrom’ and as if ‘the sea was boiling.’ Some captured the waves on their mobile phones, watching the water ebb and flow to great heights for several hours at a time. Now, a new study has revealed that the mystery waves were in fact made by the huge magnitude-9.0 earthquake that devastated Japan in 2011. Scroll down for video.