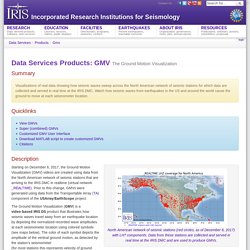 Prior to this change, GMVs were generated using data from the Transportable Array (TA) component of the USArray/EarthScope project. The Ground Motion Visualization (GMV) is a video-based IRIS DS product that illustrates how seismic waves travel away from an earthquake location by depicting the normalized recorded wave amplitudes at each seismometer location using colored symbols (see maps below). The color of each symbol depicts the amplitude of the vertical ground motion, as detected by the station’s seismometer (for most stations this represents velocity of ground movement) and normalized to its peak amplitude.