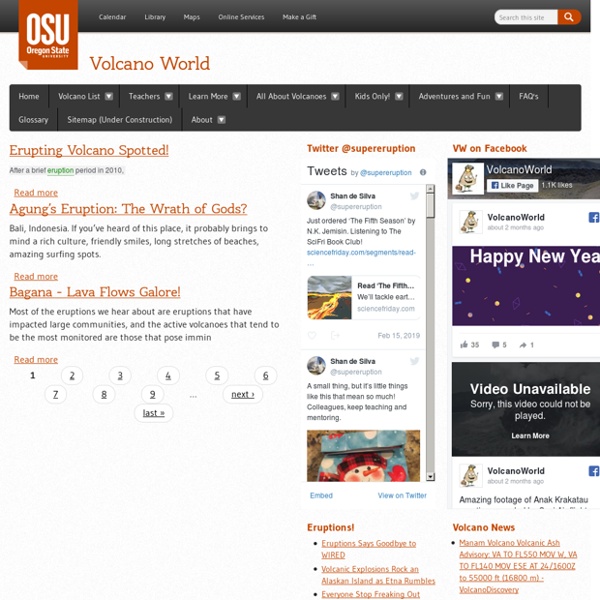 Volcano Hazards Program STEM List of large volcanic eruptions in the 21st century This is a list of volcanic eruptions of the 21st century measuring a Volcanic Explosivity Index (VEI) of at least 4, as well as notable smaller eruptions. Note that the size of eruptions can be subject to considerable uncertainty. See also[edit] References[edit] External links[edit] Magnetic stripes and isotopic clocks [This Dynamic Earth, USGS] Oceanographic exploration in the 1950s led to a much better understanding of the ocean floor. Among the new findings was the discovery of zebra stripe-like magnetic patterns for the rocks of the ocean floor. These patterns were unlike any seen for continental rocks. Obviously, the ocean floor had a story to tell, but what? In 1962, scientists of the U.S. An observed magnetic profile (blue) for the ocean floor across the East Pacific Rise is matched quite well by a calculated profile (red) based on the Earth's magnetic reversals for the past 4 million years and an assumed constant rate of movement of ocean floor away from a hypothetical spreading center (bottom). A team of U.S. Other commonly used isotopic clocks are based on radioactive decay of certain isotopes of the elements uranium, thorium, strontium, and rubidium. "Developing the theory"