American Power and its limits since 1991

Sans titre. Indeed, politics and world events were like quicksand beneath our feet. 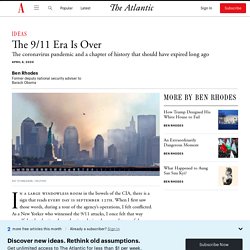 Abroad, the Syrian civil war raged, Iraq teetered, and the emergence of ISIS—the successor to the al-Qaeda affiliate that took root in Iraq after our invasion—drew the United States back into a new counterterrorism campaign. At home, Republicans fixated on a toxic stew of issues with loose, if not specious, national-security connections: an insistence on declaring war against “radical Islam,” ceaseless investigations into Benghazi that spilled over into investigations of Hillary Clinton’s email practices, and demagoguing of refugee admissions and illegal immigration into the United States.

Donald Trump drafted on these dark currents as he launched his presidential campaign in 2015, tapping into America’s post-9/11 fears of a faceless “other” and the frustrations of Americans who had been promised great victories in Iraq and Afghanistan but found only quagmires. Many Historians Got It Wrong on Obama's Foreign Policy. Jeremy Kuzmarov has taught at numerous colleges including currently at Tulsa Community College and is author of four books on U.S. foreign policy including the just released: Obama’s Unending Wars: Fronting for the Foreign Policy of the Permanent Warfare State (Atlanta: Clarity Press, 2019) as well as The Russians are Coming, Again, with John Marciano (New York: Monthly Review Press, 2018). 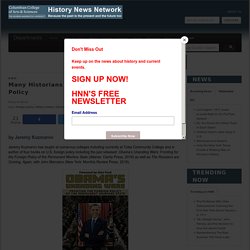 Most historians tend to be liberal in their orientation and this perspective can sometimes cloud their judgment in assessing liberal presidents. For example, Woodrow Wilson and John F. Kennedy continue to receive high marks compared to their conservative counterparts, even though both presidents carried out ruinous policies. Theconversation. The United States will withdraw from the Iran nuclear deal, according to a May 8 announcement by President Donald Trump. 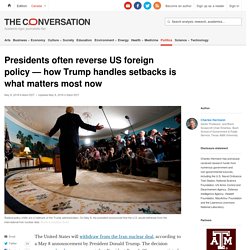 The decision reverses a hardwon agreement that President Barack Obama negotiated with European allies, Russia, Iran and other nations in 2015. This is hardly Trump’s first foreign policy turnaround. The president plans to meet with North Korean dictator Kim Jong Un, something no sitting U.S. president has ever done. He also scrapped the Trans-Pacific Partnership, relocated the American embassy in Israel to Jerusalem and decreed tariffs on imported steel and aluminum. All of these decisions have triggered vehement criticism. But is Trump really such an outlier? Some of those policies succeeded. President Obama’s Interview With Jeffrey Goldberg on Syria and Foreign Policy. Friday, August 30, 2013, the day the feckless Barack Obama brought to a premature end America’s reign as the world’s sole indispensable superpower—or, alternatively, the day the sagacious Barack Obama peered into the Middle Eastern abyss and stepped back from the consuming void—began with a thundering speech given on Obama’s behalf by his secretary of state, John Kerry, in Washington, D.C. 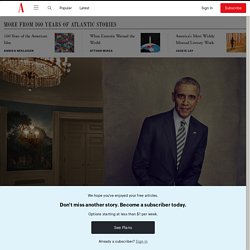 The subject of Kerry’s uncharacteristically Churchillian remarks, delivered in the Treaty Room at the State Department, was the gassing of civilians by the president of Syria, Bashar al-Assad. Obama, in whose Cabinet Kerry serves faithfully, but with some exasperation, is himself given to vaulting oratory, but not usually of the martial sort associated with Churchill. Obama believes that the Manichaeanism, and eloquently rendered bellicosity, commonly associated with Churchill were justified by Hitler’s rise, and were at times defensible in the struggle against the Soviet Union. “Free riders?

Are State Department cuts a major setback for genocide prevention? There are many indications that human rights and international justice are not priorities for President Donald Trump’s administration. 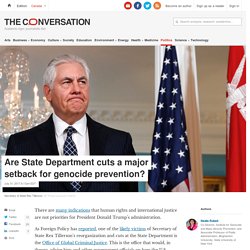 But is that an accurate assessment? As co-directors of Binghamton University’s Institute for Genocide and Mass Atrocity Prevention, we study the causes and consequences of genocides, and what is needed to prevent them. While we agree that U.S. commitment to preventing mass atrocities is important, we argue that the U.S. has for some time been taking more of a back seat on this issue than people realize. 20 years of small successes. OLL 11 Collapse of the USSR. 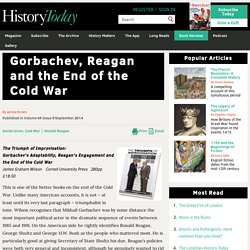 Unlike many American accounts, it is not – at least until its very last paragraph – triumphalist in tone. Wilson recognises that Mikhail Gorbachev was by some distance the most important political actor in the dramatic sequence of events between 1985 and 1991. On the American side he rightly identifies Ronald Reagan, George Shultz and George H.W. Bush as the people who mattered most. He is particularly good at giving Secretary of State Shultz his due. George HW Bush and the End of the Cold War: Crash Course US History #44. Prep Activity: George H. Bush And The "New World Order" George H.W. Bush: America’s last foreign policy president. 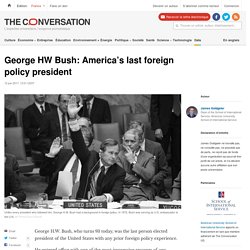 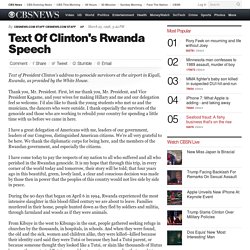 Thank you, Mr. President. Statement on Kosovo (March 24, 1999)—Miller Center. My fellow Americans, today our Armed Forces joined our NATO allies in airstrikes against Serbian forces responsible for the brutality in Kosovo. 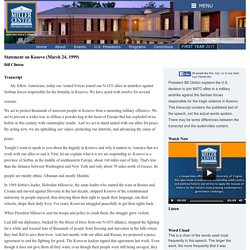 We have acted with resolve for several reasons. We act to protect thousands of innocent people in Kosovo from a mounting military offensive. We act to prevent a wider war, to diffuse a powder keg at the heart of Europe that has exploded twice before in this century with catastrophic results. And we act to stand united with our allies for peace. President Bill Clinton - Statement on Kosovo Intervention. Remarks on Operation Restore Hope (May 5, 1993)—Miller Center. To all of our distinguished guests from all the services, to General Powell and the Joint Chiefs, Secretary Aspin, Mr. 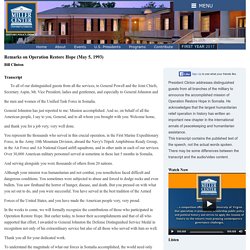 " This legislation is an important step forward in the Federal Government's continuing efforts to combat terrorism. I first transmitted antiterrorism legislation to the Congress in February 1995. Most of the proposals in that legislation, the "Omnibus Counterterrorism Act of 1995," were aimed at fighting international terrorism. After the tragedy in Oklahoma City, I asked Federal law enforcement agencies to reassess their needs and determine which tools would help them meet the new challenge of domestic terrorism. CNN - Clinton signs anti-terrorism bill - April 24, 1996. Terrorism, War, and Bush 43: Crash Course US History #46. September 11th - khanacademy. 9/11 Attacks - Facts & Summary. The presidency of George W. Bush - khanacademy.

Obamanation: Crash Course US History #47. The presidency of Barack Obama - khanacademy. Barack Obama’s Crash Course in Foreign Policy. EDITOR’S NOTE: This article is part of The Nation’s special issue on Barack Obama's presidency, available online in full on December 15. Barack Obama will bequeath to his successor the two wars he inherited from his predecessor. At least in the near term, that unwelcome fact will define his legacy as a statesman.1. The Great Recession (2007-2009) - khanacademy.