Smithsonian Source. Pbs african in america. What Impact Did the Stono Rebellion Have on the Lives of Slaves? Ch. 4 Lesson 3. Academy: The History of American Slavery. Digital History. Historiographical Essay on Slavery Although slavery is now one of the most intensively-studied aspects in United States history, there was a long period during which it was largely ignored. 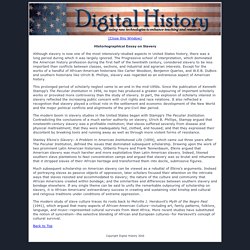 The Progressive school of interpretation, which dominated the American history profession during the first half of the twentieth century, considered slavery to be less important than conflicts between classes, sections, and industrial and agrarian interests. Except for the works of a handful of African-American historians like Carter Woodson, Benjamin Quarles, and W.E.B. DuBois and southern historians like Ulrich B. Phillips, slavery was regarded as an extraneous aspect of American history. This prolonged period of scholarly neglect came to an end in the mid-1950s. Where Historians Disagree. Eight articles by historians on the history of slavery. Slavery: History and Historians by Peter J. Parish, 1989. Background Essay on the Historiography of Slavery · HERB: Resources for Teachers. 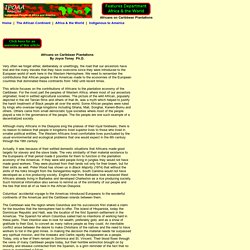 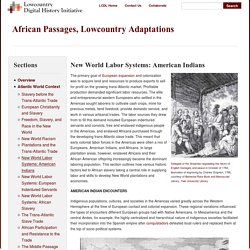 Profitable production demanded significant labor resources. The elite and entrepreneurial western Europeans who settled in the Americas sought laborers to cultivate cash crops, mine for precious metals, tend livestock, provide domestic service, and work in various artisanal trades. The labor sources they drew from to fill this demand included European indentured servants and convicts, free and enslaved indigenous people in the Americas, and enslaved Africans purchased through the developing trans-Atlantic slave trade. This meant that early colonial labor forces in the Americas were often a mix of Europeans, American Indians, and Africans. In large plantation areas, however, enslaved Africans and their African American offspring increasingly became the dominant laboring population. Conclusion · African Laborers for a New Empire: Iberia, Slavery, and the Atlantic World. Harbor scene, depicting Portuguese ships preparing to depart from Lisbon, Theodore de Bry, 1593, courtesy of the Library of Congress. 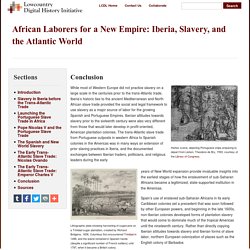 While most of Western Europe did not practice slavery on a large scale in the centuries prior to the trans-Atlantic trade, Iberia’s historic ties to the ancient Mediterranean and North African slave trade provided the social and legal framework to use slavery as a major source of labor for the growing Spanish and Portuguese Empires. Iberian attitudes towards slavery prior to the sixteenth century were also very different from those that would later develop in profit-oriented, American plantation colonies. The Early Trans-Atlantic Slave Trade: Nicolas Ovando · African Laborers for a New Empire: Iberia, Slavery, and the Atlantic World. Nicolas Ovando was the first political leader to oversee the trans-Atlantic slave trade to the Americas when he imported black slaves from Spain to the island of Hispaniola. 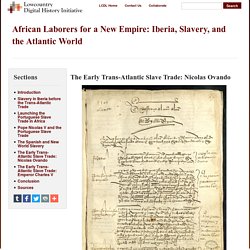 Ovando was the third governor of the “Indies”—as Spanish documents typically refer to Spain’s American colonies—after Christopher Columbus and Francisco de Bobadilla, and assumed his post in 1502. The Catholic monarchs charged Ovando with indoctrinating Amerindians, noting that as recent converts, they should not be allowed contact with Muslims, Jews, or Protestants. The monarchs therefore banned North African “Moorish” slaves from being transported to the New World, but allowed “black slaves and other slaves” who were born under “Christian dominion”—presumably meaning those born in Spain or Portugal. 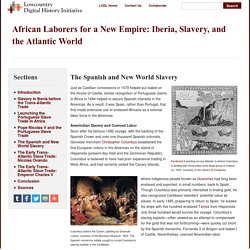 Just as Castilian concessions in 1479 helped put Isabel on the throne of Castile, similar recognition of Portuguese claims in Africa in 1494 helped to secure Spanish interests in the Americas. As a result, it was Spain, rather than Portugal, that first made extensive use of enslaved Africans as a colonial labor force in the Americas. Amerindian Slavery and Coerced LaborSoon after his famous 1492 voyage, with the backing of the Spanish Crown and over one thousand Spanish colonists, Genoese merchant Christopher Columbus established the first European colony in the Americas on the island of Hispaniola (present-day Haiti and the Dominican Republic). Columbus is believed to have had prior experience trading in West Africa, and had certainly visited the Canary Islands, and other Spanish settlements. 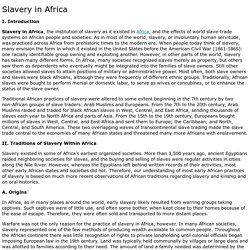 Introduction Slavery in Africa, the institution of slavery as it existed in Africa, and the effects of world slave-trade systems on African people and societies. As in most of the world, slavery, or involuntary human servitude, was practiced across Africa from prehistoric times to the modern era. When people today think of slavery, many envision the form in which it existed in the United States before the American Civil War (1861-1865): one racially identifiable group owning and exploiting another. Traditional African practices of slavery were altered to some extent beginning in the 7th century by two non-African groups of slave traders: Arab Muslims and Europeans. 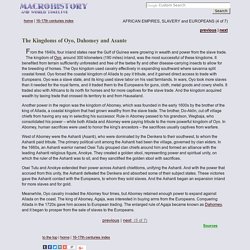 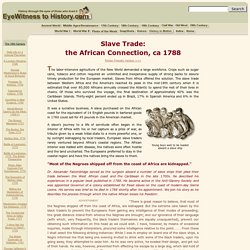 Crops such as sugar cane, tobacco and cotton required an unlimited and inexpensive supply of strong backs to assure timely production for the European market. Lesson Plans. In order to present the trans-Atlantic slave trade database to a broader audience, particularly a grade 6-12 audience, a dedicated team of teachers and curriculum developers from around the United States developed lesson plans that explore the database. 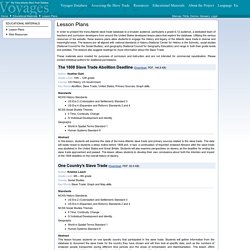 Utilizing the various resources of the website, these lessons plans allow students to engage the history and legacy of the Atlantic slave trade in diverse and meaningful ways. The lessons are all aligned with national standards in history (National Center for History in the Schools), social studies (National Council for the Social Studies), and geography (National Council for Geography Education) and range in both their grade levels and activities. The lessons also suggest readings for more information about the Slave Trade. These materials were created for purposes of curriculum and instruction and are not intended for commercial republication. Please contact individual authors for additional permissions. Author: Heather Dahl. Database scavenger hunt. 13 facts about slavery in Africa. Using a new approach to DNA analysis, the 17th century bones of three African slaves have been traced to their countries of origin for the first time, researchers said this week.

The three slaves analysed in their study came from what is modern-day Cameroon, Ghana and Nigeria, according to the findings in the Proceedings of the National Academy of Sciences, a peer-reviewed US journal. The approach, called whole genome capture, circumvented the problem of scarce DNA and was able to almost narrow down to the subject’s villages, with one coming from a Bantu speaking area of Cameroon, and the other two from non-Bantu-speaking areas of Nigeria and Ghana. Bristol and Transatlantic Slavery. Slavery existed in Africa, but it was not the same type of slavery that the Europeans introduced. The European form was called chattel slavery. A chattel slave is a piece of property, with no rights. Slavery within Africa was different. A slave might be enslaved in order to pay off a debt or pay for a crime.

Origins of the Trans-Atlantic Slave Trade. Portuguese exploration and trade: 1450-1500 Lust For Gold When the Portuguese first sailed down the Atlantic coast of Africa in the 1430's, they were interested in one thing. Surprisingly, given modern perspectives, it was not slaves but gold. Ever since Mansa Musa, the king of Mali, made his pilgrimage to Mecca in 1325, with 500 slaves and 100 camels (each carrying gold) the region had become synonymous with such wealth. There was one major problem: trade from sub-Saharan Africa was controlled by the Islamic Empire which stretched along Africa's northern coast. As the Portuguese extended their influence around the coast, Mauritania, Senagambia (by 1445) and Guinea, they created trading posts. Background: Why were Africans enslaved? - International Slavery Museum, Liverpool museums. Ethics - Slavery: Attempts to justify slavery. The economic basis of the slave trade. Last Week Tonight with John Oliver: Columbus Day - How Is That Still A Thing (HBO)

It persists to this day in modern forms, such as trafficking. Quakers & Slavery : Underground Railroad. By Christopher Densmore. Digital History. Printable Version Although slavery was highly profitable, it had a negative impact on the southern economy. Riches & Misery: The Consequences Of The Atlantic Slave Trade. Copyrighted image Copyright: BBC A recreation of an oriental-style party thrown by William Beckford of Fonthill (Orlando Wells) from the OU/BBC co-production The Slavery Business The movement of millions of Africans to the New World, during a period of roughly four hundred years, was by any standards a major historical phenomenon, with long-term international consequences. Economic history: Did slavery make economic sense? Episode 6: Effects of the Atlantic Slave Trade on the Americas. "The Economic, Political, and Social Impact of the Atlantic Slave Trade on Africa."