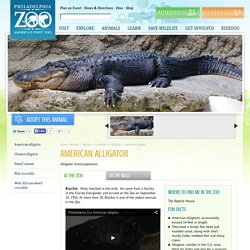 Their bottom teeth aren't visible when the mouth is closed. Reproduction They lay 20-60 eggs in a mound of mud, humus and rotting vegetation near the water's edge. Incubation averages 65 days. After the eggs hatch, the mother may stay with her young for one to three years. Alligators have no chromosomes to determine sex. Behavior Alligators spend much of their day basking on shores of rivers and lakes hidden in vegetation. They have a complex system of social communication. Adaptations The American alligator's broad, heavy head is an adaptation to living in heavily vegetated swamps--a heavy head has more momentum to help catch prey by smashing through thick vegetation. Los Angeles Zoo and Botanical Gardens Alligator, American - Los Angeles Zoo and Botanical Gardens.

Alligators spend much of the day laying in the sun on the banks of rivers, lakes, or other bodies of water, often hiding in the vegetation. 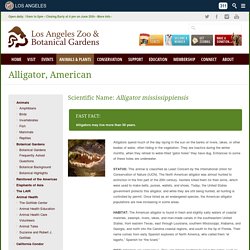 They are inactive during the winter months, when they retreat to water-filled “gator holes” they have dug. Entrances to some of these holes are underwater. STATUS: This animal is classified as Least Concern by the International Union for Conservation of Nature (IUCN). The North American alligator was almost hunted to extinction in the first part of the 20th century.

Hunters killed them for their skins, which were used to make belts, purses, wallets, and shoes. Alligators. American Alligator. Animals Reptiles & Amphibians Alligator mississippiensis American alligators were once critically endangered but due to impressive conservation efforts they have made such a comeback that their numbers are estimated to be over 1 million in the wild, and they are even considered pests in some parts of their range! 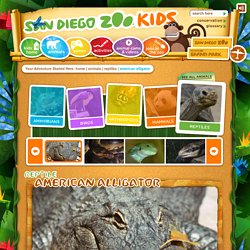 Look, in the water: Is that a floating log or an alligator? Sometimes it can be hard to tell, because the color of an alligator's bumpy skin is really good camouflage, especially when it is resting. But if it needs to, an alligator can swim up to 20 miles per hour and run on land as fast as 11 miles per hour for short distances! An alligator sweeps its long, thick tail back and forth to swim. On land, alligators often use their heavy tail to make wide, shallow holes called gator pits. A female alligator is a very good mother. Atlanta Zoo. Scientific Name Alligator mississippiensis Conservation Status Threatened Where to see them Wieland Wildlife Home Fun Facts Webbed feet aid in swimming and in locomotion through muddy habitats, while large, powerful tails propel the animals effectively through water. 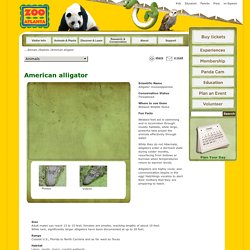 While they do not hibernate, alligators enter a dormant state during colder months, resurfacing from hollows or burrows when temperatures return to warmer levels. Alligators are highly vocal, and communication begins in the egg! Size Adult males can reach 13 to 15 feet; females are smaller, reaching lengths of about 10 feet. Range Coastal U.S., Florida to North Carolina and as far west as Texas HabitatLakes, ponds, rivers, coastal wetlands Lifestyle Alligators hunt mostly in the water and near the water’s edge. Houston Zoo. Our resident alligator, Blanco, is white from head to tail – but he’s not albino. 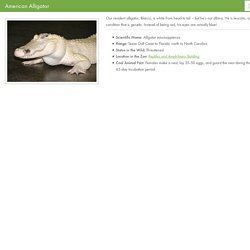 He is leucistic, a condition that is genetic. Instead of being red, his eyes are actually blue! Scientific Name: Alligator mississippiensis Range: Texas Gulf Coast to Florida; north to North Carolina Status in the Wild: Threatened Location in the Zoo: Reptiles and Amphibians Building Cool Animal Fact: Females make a nest, lay 35-50 eggs, and guard the nest during the 65-day incubation period. San Diego Zoo. Sea World. Smithsonian Institute. Taxonomy Order: CrocodyliaFamily: AlligatoridaeGenus/species:Alligator mississippiensis Description: The average size for an adult female American alligator is 8.2 feet (2.6 m), and the average size for a male is 11.2 feet (3.4 m). 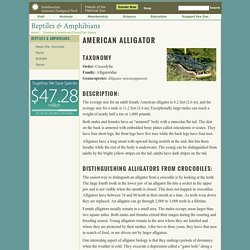 Exceptionally large males can reach a weight of nearly half a ton or 1,000 pounds. Both males and females have an "armored" body with a muscular flat tail. Alligators have a long snout with upward facing nostrils at the end; this lets them breathe while the rest of the body is underwater. Distinguishing Alligators from Crocodiles: The easiest way to distinguish an alligator from a crocodile is by looking at the teeth. Female alligators usually remain in a small area. One interesting aspect of alligator biology is that they undergo periods of dormancy when the weather is cold. In areas where the water level fluctuates, alligators dig themselves into hollows in the mud, which fill with water. Distribution and Habitat: Diet in the Wild: Crocodilians are carnivorous. Ranger Rick. More information @