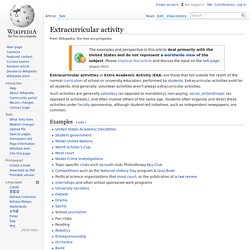 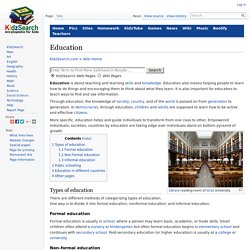 KidzSearch.com > Wiki Home Education is about teaching and learning skills and knowledge. Education also means helping people to learn how to do things and encouraging them to think about what they learn. It is also important for educators to teach ways to find and use information. Through education, the knowledge of society, country, and of the world is passed on from generation to generation. More specific, education helps and guide individuals to transform from one class to other. Subject (school) Facts for Kids. From KidzSearch, the safe free Wikipedia for kids. 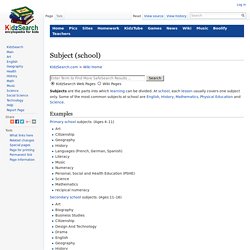 Comparison of American and British English. This is one of a series of articles about the differences between British English and American English, which, for the purposes of these articles, are defined as follows: British English (BrE) is the form of English used in the United Kingdom. 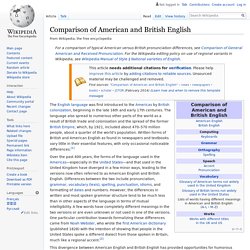 Historical background[edit] Grammar[edit] Nouns[edit] Verbs[edit] I will do. Katie : my school day. Secondary school Facts for Kids. From KidzSearch, the safe free Wikipedia for kids. 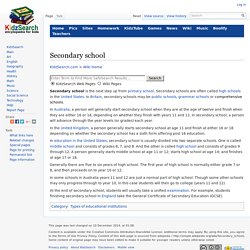 Middle school Facts for Kids. From KidzSearch, the safe free Wikipedia for kids. 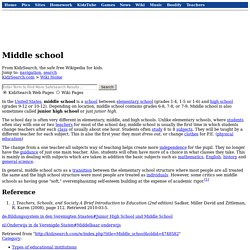 KidzSearch.com > Wiki Home In the United States, middle school is a school between elementary school (grades 1-4, 1-5 or 1-6) and high school (grades 9-12 or 10-12). Depending on location, middle school contains grades 6-8, 7-8, or 7-9. Middle school is also sometimes called junior high school or just junior high. The change from a one teacher-all subjects way of teaching helps create more independence for the pupil. In general, middle school acts as a transition between the elementary school structure where most people are all treated the same and the high school structure were most people are treated as individuals. Primary school Facts for Kids. From KidzSearch, the safe free Wikipedia for kids. 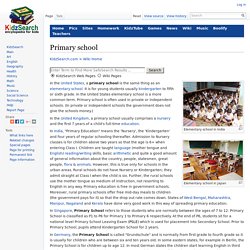 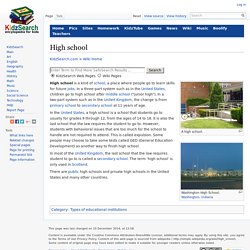