Discovery Of A Wrecked Slave Ship From 1794 Is Important Today. Last week, the Smithsonian’s National Museum of African-American Culture and History, along with several other organizations, announced the discovery of the wreckage of the Sao José Paquete Africa, a Portuguese slave ship that sank off the coast of South Africa in 1794. 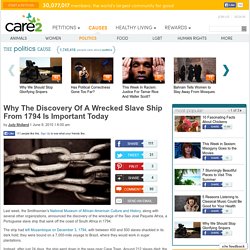 The ship had left Mozambique on December 3, 1794, with between 400 and 500 slaves shackled in its dark hold; they were bound on a 7,000-mile voyage to Brazil, where they would work in sugar plantations. Instead, after just 24 days, the ship went down in the seas near Cape Town. Around 212 slaves died; the Portuguese captain, crew and half of the slaves survived. Once brought to land, those slaves were immediately re-sold. Wrecked Slave Ship Is An Important Discovery For the Museum, this is important because it has taken more than 10 long years to make this discovery, and it marks the first-ever recovery of a slave ship that went down with slaves aboard. Harriet Tubman - Mini Bio. Amistad Mutiny. Amistad Case - Facts & Summary. My TV provider is not listed. 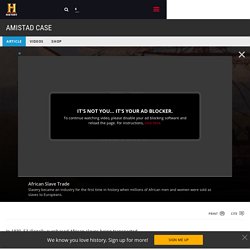 There will be new episodes and web exclusives added every day. How quickly does a new episode get added after it airs on TV? Rosa Parks Biography for Kids – The First Lady of Freedom « Rosa Louise McCauley was born February 4, 1913 in Tuskegee, Alabama. 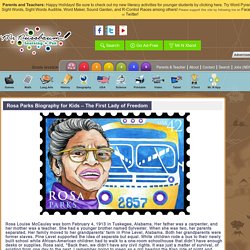 Her father was a carpenter, and her mother was a teacher. She had a younger brother named Sylvester. When she was two, her parents separated. Her family moved to her grandparents’ farm in Pine Level, Alabama. Both her grandparents were former slaves. She quit high school when she was a junior to help take care of her grandmother. On December 1, 1955, a bus driver asked her to give her seat on a bus to a white male passenger. “Another woman has been arrested and thrown in jail because she refused to get up out of her seat on the bus for a white person … This has to be stopped. This non-violent protest was successful. Rosa wrote four books, Rosa Parks: My Story, Quiet Strength, Dear Mrs. The Civil Rights Act of 1964 and the Equal Employment Opportunity Commission.

Background In the 1960s, Americans who knew only the potential of "equal protection of the laws" expected the president, the Congress, and the courts to fulfill the promise of the 14th Amendment. 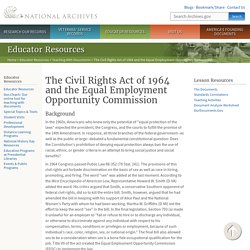 In response, all three branches of the federal government--as well as the public at large--debated a fundamental constitutional question: Does the Constitution's prohibition of denying equal protection always ban the use of racial, ethnic, or gender criteria in an attempt to bring social justice and social benefits? In 1964 Congress passed Public Law 88-352 (78 Stat. 241). Rosa Parks and the Montgomery Bus Boycott. Rosa Parks rode at the front of a Montgomery, Alabama, bus on the day the Supreme Court's ban on segregation of the city's buses took effect. 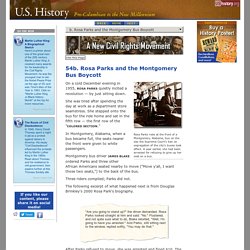 A year earlier, she had been arrested for refusing to give up her seat on a bus. On a cold December evening in 1955, Rosa Parks quietly incited a revolution — by just sitting down. She was tired after spending the day at work as a department store seamstress. HISTORY OF SLAVERY. The horrors of the slave trade do not go unnoticed in England, however hard the traders try to justify their activities (even, preposterously, proclaiming the care and consideration which they show to their precious cargo). 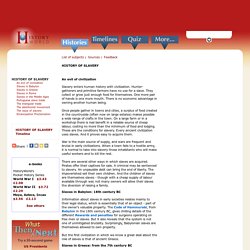 The first sharp prick to the public's conscience comes in 1688 with the publication of Aphra Behn's novel Oroonoko (about the sufferings of an African prince and his loved one, transported by the English to slavery in Surinam). By this time the Quakers are already prominent in their condemnation of this inhuman trade, with the society's founder, George Fox, speaking strongly against it. In 1772 there is a landmark case when Lord Mansfield frees James Somerset, belonging to an American master, on the grounds that he has set foot in England. Project C: Lessons from the American Civil Rights Movement. Background Sources. What were the arguments of the pro.

2. How slaves were captured. The Abolition of Slavery. Animated interactive of the history of the Atlantic slave trade. Source: slavevoyages.org For the full interactive version, use a larger device.