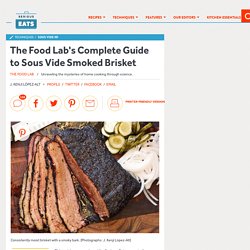 [Photographs: J. Kenji López-Alt] This guide was produced for Serious Eats as part of our partnership with Anova, the makers of the Anova Precision Cooker. You can download the Anova Precision Cooker App (it's free) to grab all this information right off your phone or tablet while you're cooking. And, if you've got an Anova Precision Cooker, you can even control it directly from the app via Bluetooth or WiFi. Pork is a popular meat for barbecue because it's so darn easy. I've tasted barbecued brisket all over the country, and, while you can certainly find some truly transcendent barbecued brisket, the vast majority of the time, it's a dry, bland disappointment.

Two factors: It's tough, and it's lean. Sous vide cooking changes all that by allowing even a novice to produce brisket that's as moist and tender as the very best stuff you'll find in Austin or Lockhart. Why Cook Brisket Sous Vide? [top] It's a fair point. Flat Cut or Point Cut? The Food Lab: How To Make The Best Chili Ever. Clockwise from left: three dried chilies, a finished bowl of chili, the effect of salt on beans [Photographs: J. 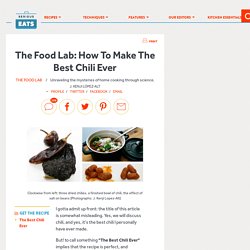 Kenji Lopez-Alt] I gotta admit up front: the title of this article is somewhat misleading. Yes, we will discuss chili, and yes, it's the best chili I personally have ever made. But! To call something "The Best Chili Ever" implies that the recipe is perfect, and perfection implies that there is no room for improvement. My first step was to set up some parameters that would define the ultimate chili. The ultimate chili should: Have a rich, complex chili flavor that combines sweet, bitter, hot, fresh, and fruity elements in balance.Have a robust, meaty, beefy flavor.Assuming that it contains beans, have beans that are tender, creamy, and intact.Be bound together by a thick, deep red sauce. Chile Verde With Pork Recipe. The Best White Chili With Chicken Recipe.

To be frank, I'm not 100% certain where this dish of tender chicken and white beans bound in a creamy, fresh green-chili sauce topped with shredded cheese comes from. 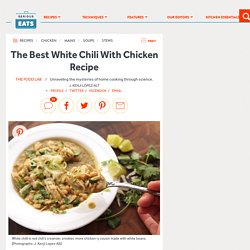 In fact, I wouldn't be surprised if the recipe actually originated on the back of a wrapper from a can chopped green chilies. But our version is better than that. Much, much better. Tender, creamy, spicy, and bright, this is the stuff even a dyed-in-the-wool chile con carne traditionalist will dip their finger into when they think nobody is watching. Why this recipe works: Roasting the chilies until blackened then using the skin to flavor the broth base for the soup lends deep, rich smoky flavors to the final dish.Soaking beans in salted water helps keep them tender as they cook.Chicken is poached just until cooked through before being shredded and stirred back into the soup to keep it moist.A healthy handful of shredded cheese enriches the stew. Note: This recipe can be made with canned beans in place of soaked. 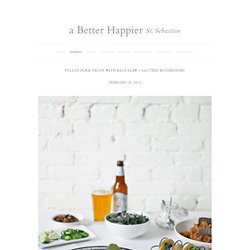 Which is why I decided it was a good weekend for tacos. We'll just be over here trying to jump start the season with warm weather food and see how that goes. These are certainly not traditional. Much like I'm all about just "putting an egg on it", I like to turn everything into tacos. Robert made a huge amount of pulled pork and I took it upon myself to use it in as many different ways as possible. For a while I had this simple kale slaw stuck in my head, and wasn't really sure which tacos it would work best with. Slow Cooked Mexican Pulled Pork2 lbs pork shoulder, fat trimmed2 teaspoons cumin6 garlic cloves, peeled and chopped1 red pepper, sliced into small strips1 teaspoon chipotle chile powder1 teaspoon adobo chile powder1 teaspoon salt1 teaspoon ground black pepper Place the pork shoulder in a slow cooker. 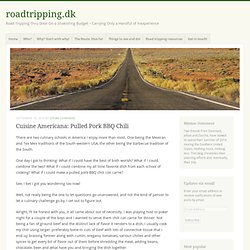