Negro Church - Delta du Mississippi - 1937. Their opposition to musical instruments in worship, organized missionary societies, their strong inheritance of Calvinist theology distinguished them from evangelicals. © Dorothea Lange. Calvinism in the heart of the Old South. Origine historique et théologique des Black Calvinists. Esclave en fuite. James W. C. Pennington, pastor of a church in New York. 1807-1870. The following Sabbath, Dr. Cox was on a visit in Brooklyn to preach, and was a guest in the family... and soon connected myself with the church under his pastoral care.

I was sold to a Presbyterian for a term of years, as he did not think it right to hold slaves for life. Having served him faithfully my time out, he gave me my liberty. Elizabeth, a colored minister of the Gospel, Philadephia, 1889. I was then eighteen years old, I had never heard a sermon. The life of Josiah Henson, formerly a slave, Boston, Arthur D. Phelps, 1849. 1787. The Slave Gallery, le temple d'Absalom Jones après avoir été expulsé du culte à St. George. A charge to keep I have, a God to glorify,a never-dying soul to save, and fit it for the sky.To serve the present age, my calling to fulfill;O may it all my powers engage to do my Master's will! 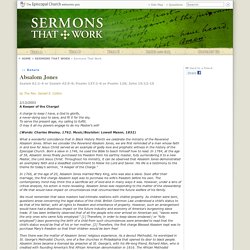 (Words: Charles Wesley, 1762. Music/Boylston: Lowell Mason, 1832) What a wonderful coincidence that in Black History Month we celebrate the ministry of the Reverend Absalom Jones. When we consider the Reverend Absalom Jones, we are first reminded of a man whose faith in and love for Jesus Christ served as an example of godly love and prophetic witness in the history of the Episcopal Church. 1891. Negro story du pasteur George Leile, fondateur de la First Colored Church (Lettre au Dr Nippon of London) Pastor: Black families made a lot more progress as slaves. Tony Evans discuss biblical racial reconciliation in a video uploaded to YouTube (Screenshot) Black people should blame themselves for the current state of the black community, according to Tony Evans of the Urban Alternative ministry. 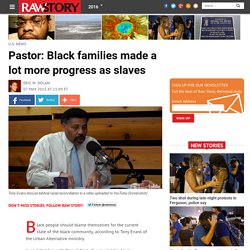 In an interview with Darrell Bock, Evans said the black community needed to get back to “the biblical standard that God holds us to,” and stop blaming white people, The Christian Post reported. “The biggest problem in Black America today is the breakdown of the family,” he explained. “The breakdown of the family is unraveling us as a community. When 70 percent plus of your children are being born out of wedlock and the fathers are not there to tend to them, you’ve got chaos in the community. “The white man is not making you do that. Evans added black families had become weaker since the United States abolished slavery. 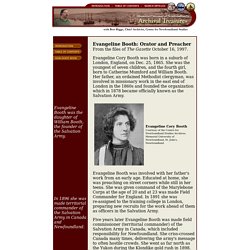 Evangeline Cory Booth was born in a suburb of London, England, on Dec. 25, 1865. She was the youngest of seven children, and the fourth girl, born to Catherine Mumford and William Booth. Her father, an ordained Methodist clergyman, was involved in missionary work in the east end of London in the 1860s and founded the organization which in 1878 became officially known as the Salvation Army. Evangeline Booth was involved with her father's work from an early age. Educated at home, she was preaching on street corners while still in her teens. Five years later Evangeline Booth was made field commissioner (territorial commander) of the Salvation Army in Canada, which included responsibility for Newfoundland. Evangeline Booth visited Newfoundland on two occasions during her years as field commissioner for Canada: November 1896 and February 1899. Julia Foote. Female Preacher in the Civil War Era Julia A. 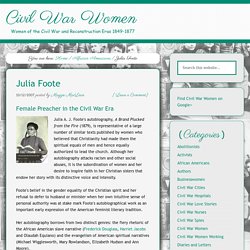 J. Foote's autobiography, A Brand Plucked from the Fire (1879), is representative of a large number of similar texts published by women who believed that Christianity had made them the spiritual equals of men and hence equally authorized to lead the church. Although her autobiography attacks racism and other social abuses, it is the subordination of women and her desire to inspire faith in her Christian sisters that endow her story with its distinctive voice and intensity.

Foote's belief in the gender equality of the Christian spirit and her refusal to defer to husband or minister when her own intuitive sense of personal authority was at stake mark Foote's autobiographical work as an important early expression of the American feminist literary tradition. Amanda Berry Smith Biography at Black History Now - Black Heritage Commemorative Society. 1837-1915 Amanda Berry Smith devoted her life to the ministry of the African Methodist Episcopal (AME) Church. 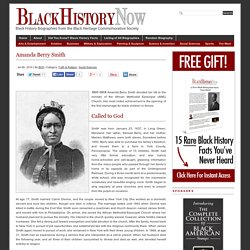 Her most noted achievement is the opening of the first orphanage for black children in Illinois. Called to God Smith was born January 23, 1837, in Long Green, Maryland. Henery Highland Garnet. Ida B. Wells... A Crusader for Freedom & Justice. C-SPAN Cities Tour - Raleigh: Anna Julia Cooper. Black History - Sojourner Truth "Ain't I a Woman" A Conversation with James Cone.