Germans know that toppling a few statues isn't enough to confront the past. Before the second world war, remembering history served only to glorify nations, to stir up revanchism or to sanctify heroes. 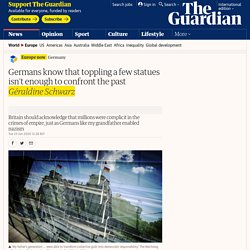 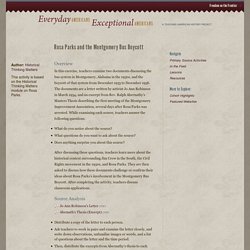 Historical Thinking Matters: Rosa Parks. The Lovings, a marriage that changed history – in pictures. How old was Harry Reid when the word Negro became taboo? Sen. 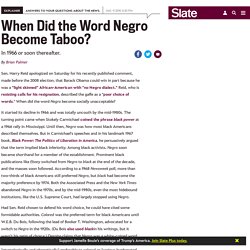 Harry Reid apologized on Saturday for his recently published comment, made before the 2008 election, that Barack Obama could win in part because he was a "light skinned" African-American with "no Negro dialect. " Reid, who is resisting calls for his resignation, described the gaffe as a "poor choice of words. " When did the word Negro become socially unacceptable? It started its decline in 1966 and was totally uncouth by the mid-1980s. The turning point came when Stokely Carmichael coined the phrase black power at a 1966 rally in Mississippi.

Veterans of the Civil Rights Movement. Literacy Tests & Voter Applications Alabama Georgia Louisiana: Mississippi South Carolina Background Today, most citizens register to vote without regard to race or color by signing their name and address on something like a postcard. Prior to passage of the federal Voting Rights Act in 1965, Southern states maintained elaborate voter registration procedures deliberately designed to deny the vote to nonwhites. This process was often referred to as a "literacy test," a term that had two different meanings — one specific and one general.

The more general use of "literacy test" referred to the complex, interlocking systems used to deny Afro-Americans (and in some regions, Latinos and Native Americans) the right to vote so as to ensure that political power remained exclusively white-only. Poll taxes. Civil Rights01. Lesson 1: Martin Luther King, Jr. and Nonviolent Resistance. If students know anything about the Civil Rights Movement of the 1950s and '60s, it will probably be Martin Luther King, Jr.'s role in leading the Movement along the path of nonviolent resistance against racial segregation. 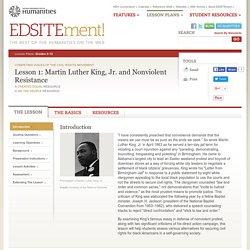 Most likely, they will have seen or read his "I Have a Dream" speech (August 28, 1963), delivered on the steps of the Lincoln Memorial, which closes with the famous line, "Free at last, free at last. Thank God Almighty, we are free at last! " Social Protests. The modern civil rights movement grew out of a long history of social protest. 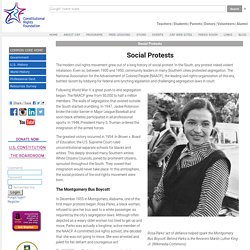 In the South, any protest risked violent retaliation. Even so, between 1900 and 1950, community leaders in many Southern cities protested segregation. Today's Primary Source: The Little Rock Nine Crisis, 1957 - Junior Historians. Primary Sources - History 128: The Civil Rights Movement - LibGuides at Tufts University. African-American Newspapers, 1827-1998 Many of the ones below may be in this collection! 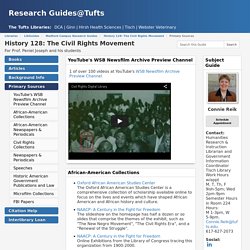 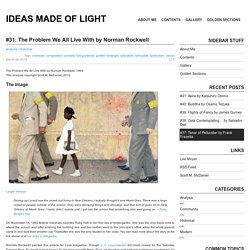 McDaniel, 2010. National Museum of African American History and Culture. On the other hand, the president was hesitant to employ federal authority in defiance of the tradition of local control over law enforcement and education. 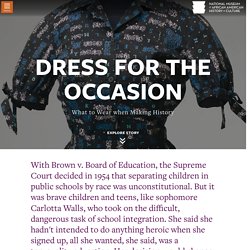 He knew state and local leaders across the South would be horrified at this use of federal power, even if it was intended to support the rule of law. As the president of the Little Rock Chamber of Commerce put it, “. . . we hadn’t had federal troops since [18] ’67! That was so shocking that we didn’t know whether we should support the government or not” (Jacoway, Turn Away Thy Son). Eisenhower’s decision established a new precedent. Eisenhower’s reluctant use of federal authority in a civil rights matter in Little Rock in 1957 was just the beginning. 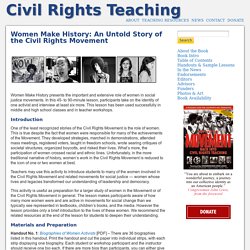 In this 45- to 90-minute lesson, participants take on the identity of one activist and interview at least six more. This lesson has been used successfully in middle and high school classes and in teacher workshops. Introduction. Teaching about 1963: Civil Rights Movement History. The year 1963 was pivotal to the modern Civil Rights Movement. 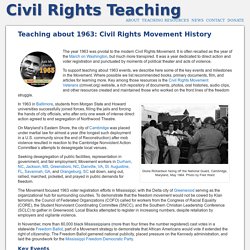 It is often recalled as the year of the March on Washington, but much more transpired. It was a year dedicated to direct action and voter registration and punctuated by moments of political theater and acts of violence. Civil Rights and Protest. The Mystery at the Heart of Great Photographs. Photo “There is nothing as mysterious as a fact clearly described.” The fact that versions of this observation have been attributed to two very different street photographers, Garry Winogrand and Lisette Model, underlines its wisdom and its mystery.

It helps explain why attempts to stage photographs — to create fictions — only rarely work as powerfully as the kind of quotations from reality that we get in documentary photographs. Larry Sultan once said he “always thought of a great photograph as if some creature walked into my room; it’s like, how did you get here? ... The Problem We All Live With. 1964 painting by Norman Rockwell The Problem We All Live With is a 1964 painting by Norman Rockwell. It is considered an iconic image of the Civil Rights Movement in the United States.[2] It depicts Ruby Bridges, a six-year-old African American girl, on her way to William Frantz Elementary School, an all-white public school, on November 14, 1960, during the New Orleans school desegregation crisis.

Because of threats of violence against her, she is escorted by four deputy U.S. marshals; the painting is framed such that the marshals' heads are cropped at the shoulders.[3][4] On the wall behind her is written the racial slur "nigger" and the letters "KKK"; a smashed and splattered tomato thrown against the wall is also visible. The white protesters are not visible, as the viewer is looking at the scene from their point of view.[3] The painting is oil on canvas and measures 36 inches (91 cm) high by 58 inches (150 cm) wide.[5] History[edit]

FBI's "Suicide Letter" to Dr. Martin Luther King, Jr., and the Dangers of Unchecked Surveillance. The New York Times has published an unredacted version of the famous “suicide letter” from the FBI to Dr. Martin Luther King, Jr. The letter, recently discovered by historian and professor Beverly Gage, is a disturbing document. But it’s also something that everyone in the United States should read, because it demonstrates exactly what lengths the intelligence community is willing to go to—and what happens when they take the fruits of the surveillance they’ve done and unleash it on a target.

The anonymous letter was the result of the FBI’s comprehensive surveillance and harassment strategy against Dr. King, which included bugging his hotel rooms, photographic surveillance, and physical observation of King’s movements by FBI agents. SEGREGATION. Nina Simone: 'Are you ready to burn buildings?' Nina Simone’s album Black Gold, recorded at New York’s Philharmonic Hall on 26 October 1969, concludes with a deeply moving performance of To Be Young, Gifted and Black. The song took its name from a hit play about Lorraine Hansberry, the celebrated playwright who had converted Simone to political activism before dying young in 1965.

As she spoke about Hansberry, Simone’s voice creaked with emotion. “I think that very soon now, maybe four or five weeks, I won’t be able to sing it anymore because each time I do it she comes a little bit closer and I miss her a little bit more.” Baltimore Protests, Then and Now. A citywide curfew that went into effect late Tuesday until early Wednesday brought calm to Baltimore in the wake of riots that spotlighted deep tension between police and the community and drew parallels to the unrest of 1968. The Civil Rights Movement: Dr. Martin Luther King Jr. and Malcolm X. On Violence and Nonviolence: The Civil Rights Movement in Mississippi. Poster, printed by the Student Nonviolent Coordinating Committee, questions the role of the Mississippi State Highway Patrol in violence against blacks.Courtesy, McCain Library and Archives, University of Southern Mississippi. Civil rights protesters encourage a boycott in Grenada, Mississippi.Courtesy, McCain Library and Archives, University of Southern Mississippi.

Mississippi Valley State University students protest the decision by then-President James Herbert White to expel all students who were involved in protesting civil injustice and curriculum issues, specifically the lack of a Black Studies program.Courtesy, McCain Library and Archives, University of Southern Mississippi. 741722_f520.jpg (JPEG Image, 520 × 351 pixels) Tuskegee Airmen- In their own words!!

10 must-watch films for perspective on civil rights. Civil Rights Movement. Racism in the United States: By the Numbers. What Happened in Ferguson? Is Everyone a Little Bit Racist? Let’s start with what we don’t know: the precise circumstances under which a white police officer in Ferguson, Mo., shot dead an unarmed black teenager named Michael Brown. But here’s what evidence does strongly suggest: Young black men in America suffer from widespread racism and stereotyping, by all society — including African-Americans themselves. A Brief History of Intolerance in America. Rosa Parks. Little Rock Nine. ♫ Bob Dylan - The Times They Are A-Changin' songtekst. Top 10 Civil Rights Protest Songs Of All Time. Source: Getty Images / Getty Images Martin Luther King knew that the Civil Rights movement needed a soundtrack and that every hero needed theme music.