Young US scholars criticise circumcision. An ominous sign of the growing American disenchantment with circumcision is an increasing number of papers and theses by young undergraduates and graduate scholars who are taking a very critical this hitherto taken-for-granted practice. 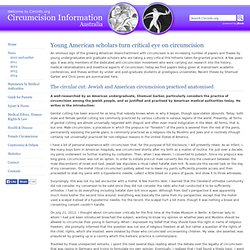 A few years ago, it was only members of the dedicated anti-circumcision movement who were carrying out research into the history, medical rationalisations and bioethical aspects of circumcision; today we find papers being given at mainstream academic conferences, and theses written by under- and post-graduate students at prestigious universities. Recent theses by Shemuel Garber and Chris Jones are summarized here.

The circular cut: Jewish and American circumcision practiced anatomised A well-researched by an American undergraduate, Shemuel Garber, particularly considers the practice of circumcision among the Jewish people, and as justified and practised by American medical authorities today. He writes in the introduction: Shemuel Toviah Garber. AAP Circumcision Policy Statement: A Critique. On Monday, August 27, 2012, at 12:01am ET the AAP is scheduled to release their newest policy statement on circumcision. 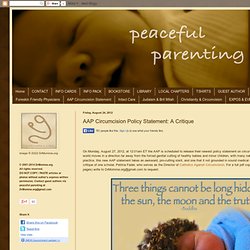 While the rest of the world moves in a direction far away from the forced genital cutting of healthy babies and minor children, with many nations implementing bans on the practice, this new AAP statement takes an awkward, pro-cutting slant, and one that it not grounded in sound medical evidence. What follows is the critique of one scholar, Petrina Fadel, who serves as the Director of Catholics Against Circumcision. For a full pdf copy of the AAP's statement (31 pages) write to DrMomma.org@gmail.com to request. Dear AAP Board Members: Circumcision is Medically Unnecessary, Painful, Risky, and Unethical: Intact America. Media Contact: Bob Liff, M+R Strategic Services, 917.438.4628, bliff@mrss.com FOR IMMEDIATE RELEASE March 19, 2013 TARRYTOWN, NY—The American Academy of Pediatrics should be reeling today from two independent blasts of criticism from doctors and medical ethicists saying the AAP’s Task Force report last summer, which softened its opposition to routine neonatal male circumcision, is unsupported by scientific data or medical ethics. 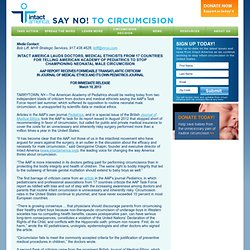 Articles in the AAP’s own journal Pediatrics, and in a special issue of the British Journal of Medical Ethics, took the AAP to task for its report issued in August 2012 that stopped short of recommending in favor of circumcision, but called for public and private medical insurance to cover the costs for an unnecessary and inherently risky surgery performed more than a million times a year in the United States. “The AAP is more interested in its doctors getting paid for performing circumcisions than in protecting the bodily integrity and health of children. 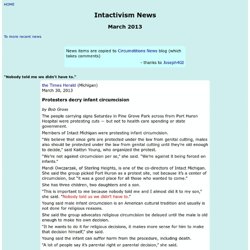 Canada’s pediatricians are about to update their advice on whether baby boys should be circumcised, revising their stand for the first time in 17 years. Aap-12-europe. Must routinely inform? Most parents only read headlines. Faulty and discredited studies to prey upon their most vulnerable patients. Legal Fiction in language used by AAP. Soap under the foreskin? oh no. Did the AAP look to HIV rates in Europe or the UK and compare to the US? Prevention or risk reduction? AAP talking to Insurance companies. 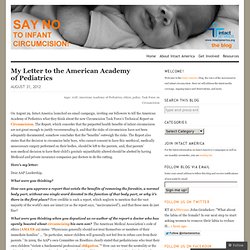 The Report, which concedes that the purported health benefits of infant circumcision are not great enough to justify recommending it, and that the risks of circumcision have not been adequately documented, somehow concludes that the “benefits” outweigh the risks. The Report also states that the decision to circumcise baby boys, who cannot consent to have this unethical, medically unnecessary surgery performed on their bodies, should be left to the parents, and, that parents’ non-medical decision to have their child’s genitals unjustifiably altered should be abetted by having Medicaid and private insurance companies pay doctors to do the cutting. Here’s my letter: Dear AAP Leadership, What were you thinking? Proxy consent poses serious problems for pediatric health care providers. 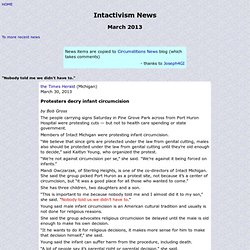 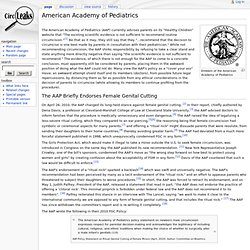 "[1] Be that as it may, they still say that they "...recommend that the decision to circumcise is one best made by parents in consultation with their pediatrician. " While not recommending circumcision, the AAP shirks responsibility by refusing to take a clear stand and state anything more directly negative than saying "the scientific evidence is not sufficient to recommend. " Cultural Bias in the AAP’s 2012 Technical Report and Policy Statement on Male Circumcision. + Author Affiliations The American Academy of Pediatrics recently released its new Technical Report and Policy Statement on male circumcision, concluding that current evidence indicates that the health benefits of newborn male circumcision outweigh the risks. 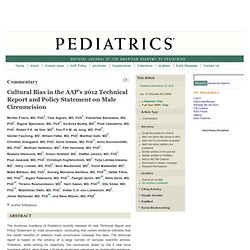 The technical report is based on the scrutiny of a large number of complex scientific articles. Therefore, while striving for objectivity, the conclusions drawn by the 8 task force members reflect what these individual physicians perceived as trustworthy evidence. Response to American Academy of Pediatrics (AAP) Circumcision Policy Statement. Aap-12-europe.