Lolcats 'n' Funny Pictures of Cats - I Can Has Cheezburger? 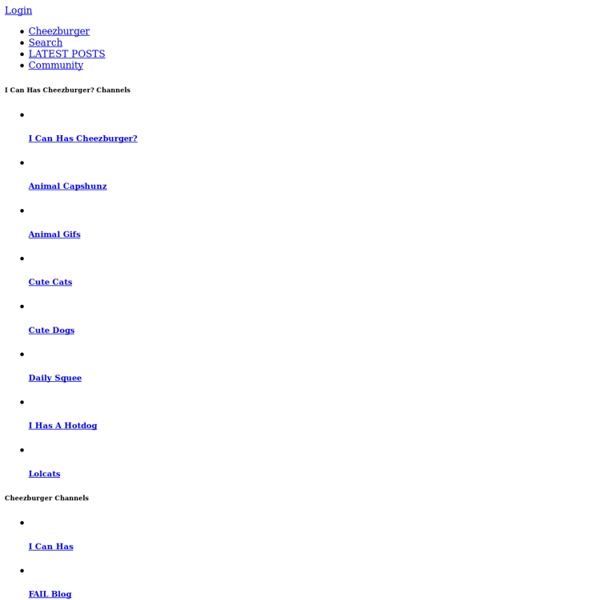 SPECIAL INSTRUCTIONS TO PLAYERS [Warning: Extremely Colourful Language Ahead] This incredible memo, purportedly issued to all Major League Baseball teams in 1898 as part of a documented campaign — spearheaded by John Brush — to rid the sport of filthy language, was discovered in 2007 amongst the belongings of the late baseball historian Al Kermish, also a respected collector of memorabilia. Essentially an on-field code of conduct, most amusing is that the memo was in fact so expletive-laden and obscene as to be "unmailable" to its intended audience via the postal service, and so was delivered by hand to each of the League's 12 clubs and their foul-mouthed players. A fascinating document.

learn tai chi We know you want to learn tai chi and it's very tempting to just say 'Start - now - today! And point you to qigong exercises and let you read about the fundamentals and start to learn some individual exercises. It's important to remember that any exercise done the wrong way has the potential to cause damage. Tai chi is no different in that respect. If you do decide to learn on your own it's really important that you protect your knees and back by following the posture guidelines at the beginning of the exercise instructions. Why Do Cats Knead? NEW: See the most adorable kitten “making biscuits.” Why do cats knead? Cats are interesting creatures, with many traits and behaviors that are easily recognized as being uniquely feline-the way they curl up tightly to take a nap, for example, or their characteristic grooming rituals after enjoying a meal. Another common feline behavior is kneading, a motion cats make by pushing in and out with their paws, alternating between right and left. Some cats knead with claws completely retracted, while others will extend their claws as they push in and retract as they pull back.

Fairytales too scary for modern children, say parents The poll found a quarter of parents polled wouldn't consider reading a fairytale to their child until they had reached the age of five, as they prompt too many awkward questions from their offspring. And 52 per cent of the parents said Cinderella didn't send a good message to their children as it portrays a young woman doing housework all day. Steve Hornsey, General Manager, Watch, said: ''Bedtime stories are supposed to soothe children and send them off to sleep soundly. ''But as we see in GRIMM, fairytales can be dark and dramatic tales so it's understandable that parents worry about reading them to young children.'' ''As adults we can see the innocence in fairytales, but a five year old with an over active imagination could take things too literally. ''Despite the dark nature of classic fairytales, as we see in GRIMM, good will triumph over evil and there is always a moral to the story.''

Your morning adorable: Baby Francois' langur monkey makes his debut at Australia's Taronga Zoo At the Taronga Zoo in Sydney, Australia, a great deal of excitement surrounds the latest addition to the resident family of Francois' langur monkeys. A male Francois' langur named Keo-co was born Jan. 30 and ventured into an outdoor enclosure for the first time on Wednesday. Keo-co's older sister, Elke, was born in 2009 and was the first offspring for mother Saigon. Unfortunately, Saigon didn't immediately take to motherhood and zoo staff elected to raise Elke themselves in order to ensure that she was healthy and well cared for. (Elke is now fully grown and still lives at Taronga, but she occupies a different enclosure than Saigon.) This time around, Saigon seems to have gotten the hang of parenting and the zoo reports that Keo-co is extremely bonded to her.

The Story of Mel This was posted to USENET by its author, Ed Nather (utastro!nather), on May 21, 1983. A recent article devoted to the *macho* side of programming made the bald and unvarnished statement: Real Programmers write in FORTRAN. Maybe they do now, in this decadent era of Lite beer, hand calculators, and "user-friendly" software but back in the Good Old Days, when the term "software" sounded funny and Real Computers were made out of drums and vacuum tubes, Real Programmers wrote in machine code. African-American Civil Rights Movement (1955–1968) The African-American Civil Rights Movement or 1960s Civil Rights Movement encompasses social movements in the United States whose goals were to end racial segregation and discrimination against black Americans and to secure legal recognition and federal protection of the citizenship rights enumerated in the Constitution and federal law. This article covers the phase of the movement between 1954 and 1968, particularly in the South. A wave of inner city riots in black communities from 1964 through 1970 undercut support from the white community.

10 Red Flags to Heed When Inspecting a Cat Boarding Facility One of the most important decisions we make about our cats is where to board them. Often the fretful thought of leaving Fluffy behind can influence not only our trip once we're there but also our decision to go. The back and forth of "What if my cat isn't OK while I'm away?" Your child is acting like an a-hole, and it's your fault. No offense. Recent brunch experience. Me: Table for three? Smartly dressed parents: Well, we need a minute.

Check out all of the cheezeburger related sites at the bottom of the page, Failblog, demotivational posters, Epic Win, and many others are hilarious! by katsnake Oct 31