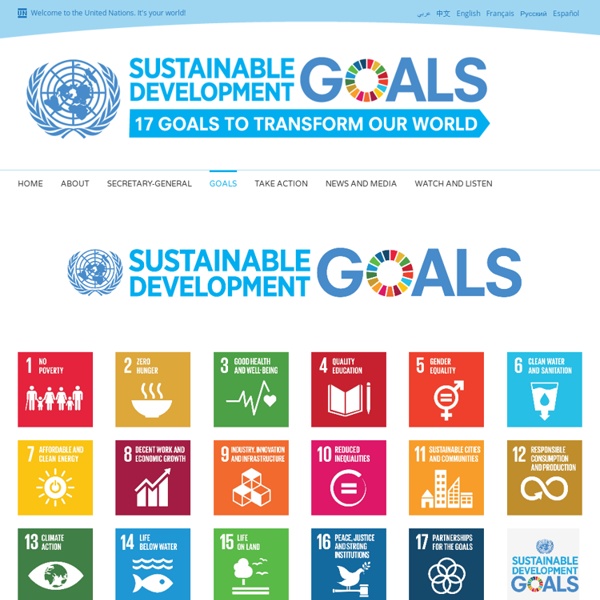 titled 3 September 2015 – As United Nations Member States prepare to adopt a new set of Sustainable Development Goals, a ground-breaking collaboration of campaigners, public figures, companies and civil society groups is uniting to tell seven billion people in seven days that “it’s time to change the world.” During a press conference at UN Headquarters today, the Global Goals campaign, founded by filmmaker Richard Curtis, was announced as aiming to make the 17 UN Goals famous and to push for their full implementation worldwide. Described as an “unprecedented effort,” the campaign is supported by a variety of other social movements including action/2015 – a coalition of over 2000 organizations – and Global Citizen, a community of ordinary people that help fight extreme poverty. The Agenda, its 17 proposed Goals and 169 targets aim to be a charter for people and the planet in the twenty-first century. “Being famous is absolutely necessary to ensure that [the goals] are implemented,” Ms.

Finance & Development, December 2014 Finance & Development, December 2014, Vol. 51, No. 4 Devi Sridhar and Chelsea Clinton PDF version Global Advocacy: Gender-Focused Community-led Development for All The purpose of this note is to provide a brief outline the similarities and differences between the Millennium Development Goals (MDGs) launched in 2000, and the Sustainable Development Goals (SDGs), to be launched in 2015 when the MDGs expire. (Update 4 December 2014)The Secretary-General has released his Synthesis Report on SDGs, which affirms and strengthens the 17 goals described below). This note must be somewhat speculative, since the governments will not finalize their agreement on the SDGs until September 2015 at the earliest. However, for the past two years, the general “shape” of the SDGs has remained surprisingly stable. There are certain key similarities. The UN Secretary-General has mandated that the SDGs not lose the key successful elements of the MDGs – that they were clear, concise, time-bound and measurable.

Governing the UN Sustainable Development Goals: interactions, infrastructures, and institutions Three of the eight Millennium Development Goals (MDGs) concerned health. There is only one health goal in 17 proposed Sustainable Development Goals (SDGs). Critiques of the MDGs included missed opportunities to realise positive interactions between goals.1 Here we report on an interdisciplinary analytical review of the SDG process, in which experts in different SDG areas identified potential interactions through a series of interdisciplinary workshops. This process generated a framework that reveals potential conflicts and synergies between goals, and how their interactions might be governed. In our framework, the 17 SDGs are represented in three concentric layers, reflecting their main intended outcomes (figure). The single health goal is in the inner layer of people-centred goals that aim to deliver individual and collective wellbeing through improved health and education, ensuring equitable distribution within and between individuals and countries.

5. How do the SDGs compare with the MDGs? The 2030 Agenda and the SDGs built on the lessons learnt from the MDGs to provide a better and more comprehensive framework, which includes the completion of the so-called “MDG unfinished business”. Their widened and comprehensive scope tackles all sectors. The range of topics covered in the SDGs more closely reflects the range of issues that a government faces in reality, rather than the narrower agenda of the MDGs.While the MDGs only addressed developing countries, the SDGs are global in nature and universally applicable to all countries, whilst accounting for national variations in development and capacity.While the MDGs followed a vertical approach, the SDGs represent a comprehensive vision and are therefore interconnected. This means that achieving the SDGs requires to work across sectors.The SDGs also have a focus on monitoring, evaluation and accountability that was not considered by the MDGs – a key feature to achieving equity and leaving no one behind.