Scientists From Germany Show That Water Has Memory. This Video Blows My Mind. George Monbiot: Never-Ending Growth Cannot Be Sustained on a Finite Planet. Corruption, systemic injustice and an obsession with growth and profit at all costs have put our planet in serious jeopardy. 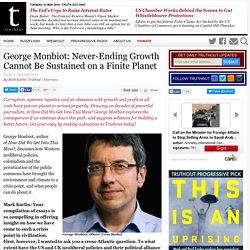 The Great Grief: How To Cope with Losing Our World — Over Grow The System. Climate scientists overwhelmingly say that we will face unprecedented warming in the coming decades. 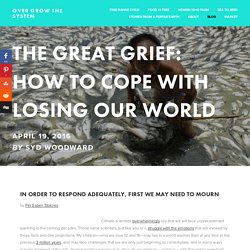 Those same scientists, just like you or I, struggle with the emotions that are evoked by these facts and dire projections. My children—who are now 12 and 16—may live in a world warmer than at any time in the previous 3 million years, and may face challenges that we are only just beginning to contemplate, and in many ways may be deprived of the rich, diverse world we grew up in. How do we relate to – and live – with this sad knowledge? Across different populations, psychological researchers have documented a long list of mental health consequences of climate change: trauma, shock, stress, anxiety, depression, complicated grief, strains on social relationships, substance abuse, sense of hopelessness, fatalism, resignation, loss of autonomy and sense of control, as well as a loss of personal and occupational identity.

Healthy News and Information. For the first time in history, a combination of drought and overconsumption of water have pushed the river in India, the Shamala river in Karnataka to its limits, revealing under its bank secrets that have shocked the archaeological community. 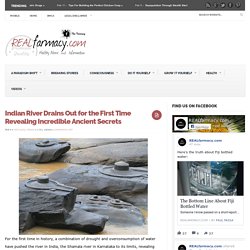 The receding river has revealed the presence of thousands of Shiva Lingas which were carved in the distant past along the river bed. The place referred to as “Sahasralinga” (thousand Shiva Lingas in Sanskrit) has become an extremely important pilgrimage site and thousands of people visit Sahasralinga offering their prayers to Lord Shiva.

Shiva Lingas Shiva Lingas or the Lingam is a representation of the Hindu deity Shiva, it issued in temples for worship. This Is How Sand Looks Magnified Up To 300 Times. Comparing something to a grain of sand is usually supposed to mean that it’s small or insignificant, but Dr. 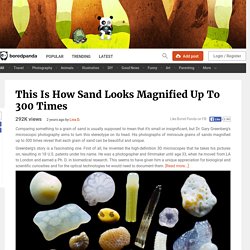 Gary Greenberg’s microscopic photography aims to turn this stereotype on its head. His photographs of miniscule grains of sands magnified up to 300 times reveal that each grain of sand can be beautiful and unique. Greenberg’s story is a fascinating one. First of all, he invented the high-definition 3D microscopes that he takes his pictures on, resulting in 18 U.S. patents under his name. He was a photographer and filmmaker until age 33, when he moved from LA to London and earned a Ph. Sand composition can vary drastically depending on where it’s located. Researchers discover the cause of megafauna die out 40,000 years ago - RN Breakfast. Hearing the Music of the Plants. Science shows us that being near trees and plants significantly improves our physical, mental and emotional wellbeing. 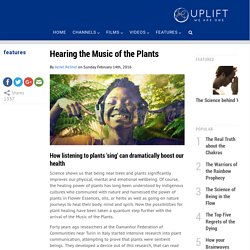 Of course, the healing power of plants has long been understood by indigenous cultures who communed with nature and harnessed the power of plants in Flower Essences, oils, or herbs as well as going on nature journeys to heal their body, mind and spirit. Now the possibilities for plant healing have been taken a quantum step further with the arrival of the Music of the Plants. Forty years ago researchers at the Damanhur Federation of Communities near Turin in Italy started intensive research into plant communication, attempting to prove that plants were sentient beings. German Forest Ranger Finds That Trees Have Social Networks, Too. Tasmania fires: First images of World Heritage Area devastation emerge, show signs of 'system collapse' Updated The first images to emerge from within Tasmania's fire-affected World Heritage Area (WHA) have illustrated the level of destruction caused by bushfire, as experts warn such incidents are signs of a changing climate. 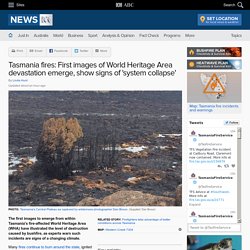 Bark: An Intimate Look at the World’s Trees. By Maria Popova Tree bark may not sound like the most exciting or relatable of subjects but, in fact, it is both. 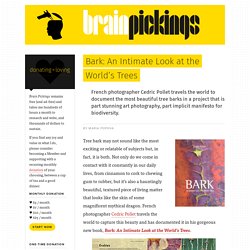 Ancient Seeds Yield Once Extinct Squash [STORY] Gardens: do plants think? Meet the plant that is making scientists rethink how we understand intelligence. 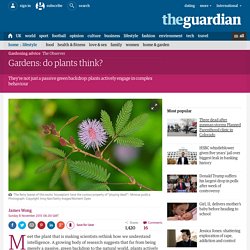 A growing body of research suggests that far from being merely a passive, green backdrop to the natural world, plants actively engage in complex behaviour. They are capable of communicating with allies, attacking rivals and even feeding their young. The Great Old Ones: In Celebration of Our Tree Elders. Photograph from the 1917 "The National Parks Portfolio" (via Internet Archive Book Images) Trees are fascinating — if left undisturbed by humans and our axes, they can grow to incredible sizes, and live for thousands of years. 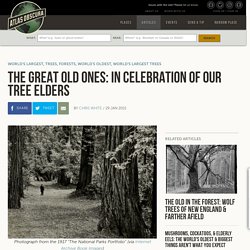 Around the world, there are trees that have been growing for a much longer period of time than famed arbors like Methuselah or General Sherman. Some of these beautiful ancients may not look like much — some appear to be mere saplings, compared to the gigantic redwoods. Pando aspen grove at Fishlake National Forest (photograph by J Zapell/Wikimedia) 10 of the world’s most remarkable trees. Ancient Trees: Woman Spends 14 Years Photographing World’s Oldest Trees. Beth Moon, a photographer based in San Francisco, has been searching for the world’s oldest trees for the past 14 years. 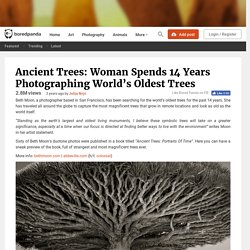 She has traveled all around the globe to capture the most magnificent trees that grow in remote locations and look as old as the world itself. Show Full Text “Standing as the earth’s largest and oldest living monuments, I believe these symbolic trees will take on a greater significance, especially at a time when our focus is directed at finding better ways to live with the environment” writes Moon in her artist statement. How Old is The Water On Earth? Hang onto your chair and prepare to have your mind blown.. New research reveals that a big portion of the Earth’s water is older than previously thought, and actually predates the age of the Sun. Moreover, the findings of the study suggest that water – and life – could exist on exoplanets throughout our galaxy and beyond. That bottle of water sitting on your desk is really really old.. Actually, unfathomably ancient.. New Study Shows Plants Talk to Each Other Through the Soil.

Image via Shutterstock A new study conducted by Dr. David Johnson at the University of Aberdeen found that plants actually communicate with one another through the soil. The study shows that when vegetables are infected with certain diseases, they alert other nearby plants to activate genes to ward off the disease when it heads their way. The key to this communication is a soil fungus that acts as a messenger. Image via Shutterstock Soil fungus and certain plants have a symbiotic relationship, according to the research team, who shared their findings with The Economist.

Related: Glowing Bioluminescent Plants for Lighting Nature’s Way In 2010, a team of Chinese researchers found that when a tomato plant became infected with a leaf blight, it was able to somehow alert nearby tomato plants, which then prepared their defense. Amazon.co. Trees with eyes, walls with ears, atoms with voices, a planet that lives and breathes. These are the Songs of the Earth. The sense that “I am” governs practically everything that I do.

Yet there is no room for the subjective in science. If the scientific project is to be believed, everything in our world has sprung up by chance from random particles. My feeling of self is an illusion created by inanimate matter. 27 Images That Prove That We Are In Danger. Welcome to the Quietest Square Inch in the U.S. Gordon Hempton uses a sound level meter on the Hoh River Trail. Photo: AP. Terra Flamma: Stunning Long-Exposure Photographs of California Wildfires by Stuart Palley. The El Portal Fire burns on a hillside in the Stanislaus National Forest and Yosemite National Park on Sunday evening July 27, 2014. ʻĀINA: That Which Feeds Us (2015) These 10 Award Winning Photos Provide a Wonderful Window to Our World. By National Geographic / travel.nationalgeographic.com The 2015 National Geographic Traveler Photo Contest judges reviewed nearly 18,000 photographs.

New research finds oceans once held more gold than Fort Knox - Staff - University of Tasmania, Australia. Electric daisies: can a flower really give you a shock? Sadly, my garden isn’t quite this big. My Dad was visiting again the other day, making an absolutely lovely job of our garden as usual (our garden is beautiful, despite the fact that my last bit of flora-based input was sowing some grass seed six years ago), and we took a trip to the National Herb Centre. Sea Sheep: Adorable Sea Slug That Looks Like A Sheep That’s Eaten Too Much Algae! I Must Have One! As globe warms, melting glaciers revealing more than bare earth. As a result of warming temperatures, Mexico’s tallest volcano, Pico de Orizaba, is performing an all-natural striptease, the ice patches near its summit melting away to bare rock.

Untitled. Underwater: This picture shows scuba diver Marc Henauer exploring the beautiful Green Lake in Tragoess, Austria, which floods every yearSource: Daily Mail. 10 of the Most Surreal Places on Earth - tentree. Nature Is Speaking. 9 Examples of Indigenous Sense in a Nonsensical Time. Parallel worlds exist and interact with our world, say physicists. World’s Best Water Photographer Captures The Most Stunning Pictures Of Ocean Waves You’ve Ever Seen. 22+ International Borders Around The World. Incredible Photos Of Mongolian Tribe Show Deep Bond With Animals :Your News Wire. Letter from Eric Avebury, Noam Chomsky, Zac Goldsmith, Jonathon Porritt and others. Paul Stamets: 6 ways mushrooms can save the world. 25 Natural Phenomena That Science Has Yet To Explain. This island tribe will kill outsiders who visit yet face survival threat.

You Haven't Experienced Real Magic Until You've Stood Under These 11 Trees. A language family tree - in pictures. Earth Changes and Hopi World-Ages by Gary A. David. Mysterious, isolated Mashco-Piro tribe ventures out of threatened Peru forests. 400-Year-Old Arctic Plants Frozen by Glaciers Come Back From the Dead. Scientists Discover Another Earth! Scientists Propose Parallel Universes Really Exist. Nothing is solid: This is the world of Quantum Physics. 7 Must-Read Books on Time.