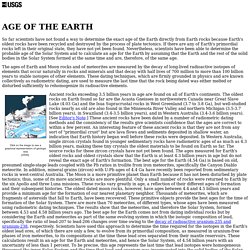 If there are any of Earth's primordial rocks left in their original state, they have not yet been found. Nevertheless, scientists have been able to determine the probable age of the Solar System and to calculate an age for the Earth by assuming that the Earth and the rest of the solid bodies in the Solar System formed at the same time and are, therefore, of the same age. The ages of Earth and Moon rocks and of meteorites are measured by the decay of long-lived radioactive isotopes of elements that occur naturally in rocks and minerals and that decay with half lives of 700 million to more than 100 billion years to stable isotopes of other elements.

Ancient rocks exceeding 3.5 billion years in age are found on all of Earth's continents. For additional information on this subject, see G. Untitled. By Kathryn Lyon ’13Illustration by Evan Lorenzen ’13 Suppose you were to come across a human and an ape dangling from the side of a cliff. 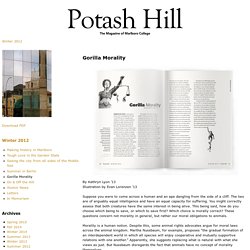 The two are of arguably equal intelligence and have an equal capacity for suffering. You might correctly assess that both creatures have the same interest in being alive. This being said, how do you choose which being to save, or which to save first? DERECHOS DE NATURALEZA - COLOMBIA REFERENDUM. Esta iniciativa surge como un propósito del Movimiento Intercultural Tod@s Atierra, que en cabeza de su directora la concejala Ati Quigua, viene desarrollando un proceso de tejer los hilos de la historia para Bakatá y Colombia. 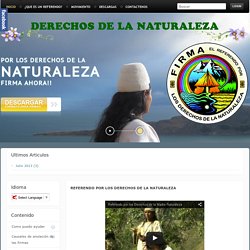 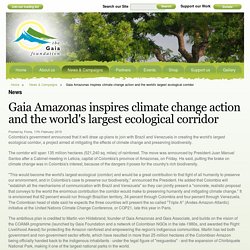 The corridor will span 135 million hectares (521,240 sq. miles) of rainforest. The move was announced by President Juan Manuel Santos after a Cabinet meeting in Leticia, capital of Colombia's province of Amazonas, on Friday. He said, putting the brake on climate change was in Colombia's interest, because of the dangers it poses for the country's rich biodiversity. "This would become the world's largest ecological (corridor) and would be a great contribution to that fight of all humanity to preserve our environment, and in Colombia's case to preserve our biodiversity," announced the President.

Voice of the voiceless. British professor claims to have photographed fairies! Do you believe in fairies? 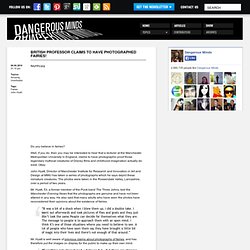 Well, if you do, then you may be interested to hear that a lecturer at the Manchester Metropolitan University in England, claims to have photographic proof those legendary mythical creatures of Disney films and childhood imagination actually do exist. Okay. John Hyatt, Director of Manchester Institute for Research and Innovation in Art and Design at MMU has taken a series of photographs which he says depict these miniature creatures. The photos were taken in the Rossendale Valley, Lancashire, over a period of two years. Mr. “It was a bit of a shock when I blew them up, I did a double take. Mr. “Everything gets stereotyped, whatever it is. Read more on the story here, and see more of John Hyatt’s photographs here. Now, here’s some fairies someone else filmed earlier. Via the Manchester Evening News. Giant Pyramids and Sphinxes Found in The Bermuda Triangle.

Water. Fire. Earth. Air. The Emancipated Earth. Save for land in Antarctica, the terrestrial earth is entirely owned: Considered property, it has no rights of its own. 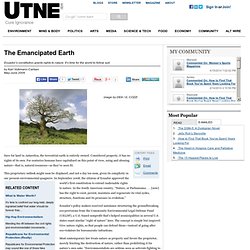 For centuries humans have capitalized on this point of view, using and abusing nature—that is, natural resources—as they’ve seen fit. This proprietary outlook might soon be displaced, and not a day too soon, given its complicity in our present environmental quagmire. In September 2008, the citizens of Ecuador approved the world’s first constitution to extend inalienable rights to nature. In the South American country, “Nature, or Pachamama . . . [now] has the right to exist, persist, maintain and regenerate its vital cycles, structure, functions and its processes in evolution.” Ecuador’s policy makers received assistance structuring the groundbreaking eco-provisions from the Community Environmental Legal Defense Fund (CELDF), a U.S.

As for how to uphold Pachamama’s new rights, it’s too early to say. Ecuador has only just begun that interpretive process. Nature Connection.