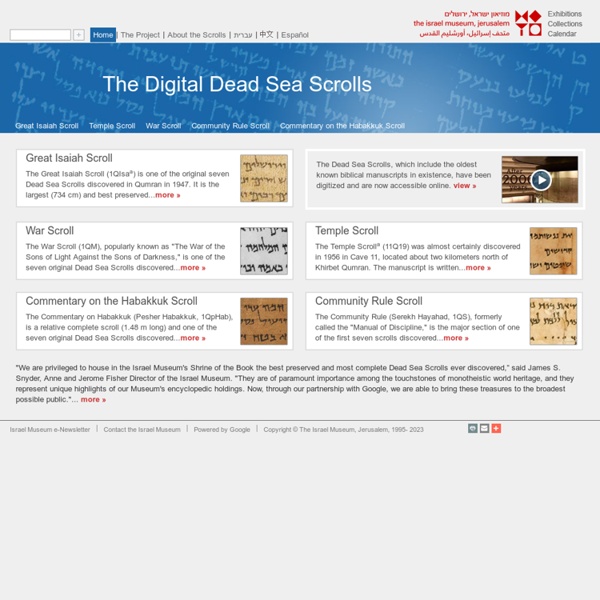 Great Isaiah Scroll The Great Isaiah Scroll (1QIsaa) is one of the original seven Dead Sea Scrolls discovered in Qumran in 1947. It is the largest (734 cm) and best preserved...more » The Dead Sea Scrolls, which include the oldest known biblical manuscripts in existence, have been digitized and are now accessible online. view » War Scroll The War Scroll (1QM), popularly known as "The War of the Sons of Light Against the Sons of Darkness," is one of the seven original Dead Sea Scrolls discovered...more »

Syncretism Syncretism /ˈsɪŋkrətɪzəm/ is the combining of different, often seemingly contradictory beliefs, while melding practices of various schools of thought. Syncretism involves the merger and analogizing of several originally discrete traditions, especially in the theology and mythology of religion, thus asserting an underlying unity and allowing for an inclusive approach to other faiths. Syncretism also occurs commonly in expressions of arts and culture (known as eclecticism) as well as politics (syncretic politics). Nomenclature, orthography, and etymology[edit] The Oxford English Dictionary first attests the word syncretism in English in 1618. 12,000 Years Old Unexplained Structure Video Log in Civilization Cynthia Yildirim 12,000 Years Old Unexplained Structure

Enoch & the Nephilim - Part III Enoch & the Nephilim Part III The Evidence Mounts "More and more we are finding that mythology in general though greatly contorted very often has some historic base. And the interesting thing is that one myth which occurs over and over again in many parts of the world is that somewhere a long time ago supernatural beings had sexual intercourse with natural women and produced a special breed of people." -Francis A.

Hebrew Glossary Then name Ashkenaz (Bereishit 10:3) has since the 10th century been identified with Germany. As the German and French Jews of the medieval period formed a uniform group in culture and religious customs, they were all referred to as Ashkenazim in contradistinction to the Sefardim or Spanish- Portuguese Jews. Ashkenazim are the people who use Nusach Ashkenaz, the prayer arrangement adopted by the medieval Franco-German Jews, including certain variations described as belonging to the Polish custom (Minhag Polin).

English Pronunciation If you can pronounce correctly every word in this poem, you will be speaking English better than 90% of the native English speakers in the world. After trying the verses, a Frenchman said he’d prefer six months of hard labour to reading six lines aloud. Dearest creature in creation, Study English pronunciation. I will teach you in my verse Sounds like corpse, corps, horse, and worse. I will keep you, Suzy, busy, Make your head with heat grow dizzy. Tear in eye, your dress will tear. The Ancient Chinese Libertarian Tradition - Murray N. Rothbard The first libertarian intellectual was Lao-tzu, the founder of Taoism. Little is known about his life, but apparently he was a personal acquaintance of Confucius in the late sixth century BC and like the latter came from the state of Sung and was descended from the lower aristocracy of the Yin dynasty. Unlike the notable apologist for the rule of philosopher-bureaucrats, however, Lao-tzu developed a radical libertarian creed. For Lao-tzu the individual and his happiness was the key unit and goal of society. If social institutions hampered the individual's flowering and his happiness, then those institutions should be reduced or abolished altogether. To the individualist Lao-tzu, government, with its "laws and regulations more numerous than the hairs of an ox," was a vicious oppressor of the individual, and "more to be feared than fierce tigers."

8 Conspiracy Theories That Make the Reptilians Seem Normal So you’re in the market for a good conspiracy theory to justify your chronic social isolation. But you don’t want to be one of those conspiracy theory conformists. You want to stand out from the crowd of Truthers, Reptilians, and whatever you call those people who think that the Third Reich continues at the center of the Earth. Well, don’t despair! Our world is rife with even crazier conspiracy theories that you can believe in while still keeping your individuality alive.

Library of Ashurbanipal The Royal Library of Ashurbanipal, named after Ashurbanipal, the last great king of the Neo-Assyrian Empire, is a collection of thousands of clay tablets and fragments containing texts of all kinds from the 7th century BC. Among its holdings was the famous Epic of Gilgamesh. Due to the sloppy handling of the original material much of the library is irreparably jumbled, making it impossible for scholars to discern and reconstruct many of the original texts, although some have survived intact. The materials were found in the archaeological site of Kouyunjik (ancient Nineveh, capital of Assyria) in northern Mesopotamia. The site is in modern day Iraq.[2][3]

Hebrew Alphabet The Hebrew and Yiddish languages use a different alphabet than English. The picture below illustrates the Hebrew alphabet, in Hebrew alphabetical order. Note that Hebrew is written from right to left, rather than left to right as in English, so Alef is the first letter of the Hebrew alphabet and Tav is the last. What Are The Hardest Languages To Learn? Learning a new language can be difficult, but some languages can be trickier than others. For native English speakers, the difficulty level of a new language depends on a variety of factors. So which are the most difficult to learn? And which languages would you be able to master in under a year?