Literacy Strategies in the Math Classroom

Here is a collection of articles, resources, and strategies for infusing literacy into th math classroom.

What's Literacy Got to do with It. Literacy Strategies for Improving Mathematics Instruction. 10 Ways Literacy Can Promote A Deeper Understanding Of Math. Literacy Strategies for the Math Classroom. Fisher. Literacy in the Math Classroom FINAL. Anticipation Guides: Reading for Mathematics Understanding. With the acceptance by many states of the Common Core State Standards for Mathematics, new emphasis is being placed on students’ ability to engage in mathematical practices such as understanding problems (including word problems), reading and critiquing arguments, and making explicit use of definitions (CCSSI 2010). 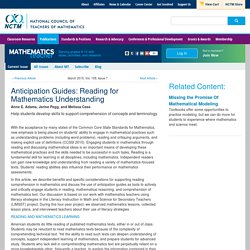 Engaging students in mathematics through reading and discussing mathematical ideas is an important means of developing these mathematical practices and the skills needed to be successful in such tasks. Reading is a fundamental skill for learning in all disciplines, including mathematics. Independent readers can gain new knowledge and understanding from reading a variety of mathematics-focused texts. MHS Literacy Strategy Book. ED544239. 101 Math Journal Prompts. Writing Prompts, Topics, Formats - Writing In High School Math Class. Writing in Math Class? Math Writing Prompts and Assignments. Written by: Keren Perles • edited by: Trent Lorcher • updated: 1/5/2012. 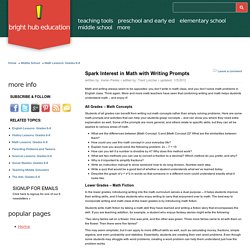 Journal writing in the mathmatics classroom. MATH WRITING PROMPTS AES. AdLIT > In Perspective Magazine > A Case for Using Reading and Writing in a Mathematics Classroom. Classroom Vignette by Sarah E. 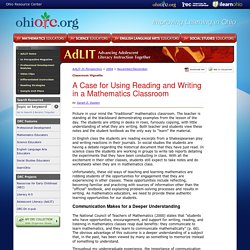 Kasten Picture in your mind the "traditional" mathematics classroom. The teacher is standing at the blackboard demonstrating examples from the lesson of the day. The Solution to Reading Comprehension. Current events, lesson plans, quizzes, assessments. The Magic of Math: World. Beginning Education Worldwww.education-world.com/math Explore the world using math! 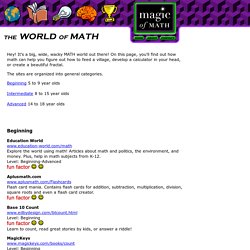 Articles about math and politics, the environment, and money. Articles for Math Class. Have You “Flipped” Your Math Classroom Today? 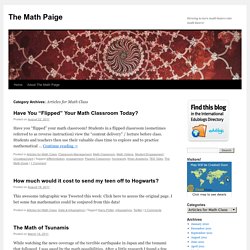 Have you “flipped” your math classroom? Students in a flipped classroom (sometimes referred to as reverse instruction) view the “content delivery” / lecture before class. Students and teachers then use their valuable class time to explore and to practice mathematical … Continue reading. Reading in the Mathematics Classroom. By Joan M. 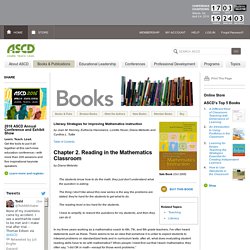 Kenney, Euthecia Hancewicz, Loretta Heuer, Diana Metsisto and Cynthia L. Tuttle To many teachers, mathematics is simply a matter of cueing up procedures for students, who then perform the appropriate calculations. Over and over, I hear teachers interpret problems for their students when asked what a question means or when a student says, “I don't know what to do.” This started me thinking about the mathematics teacher's role in helping students to interpret problems. Certainly teachers try to help students to read and interpret mathematics text and discuss problem-solving strategies with them. Compound Interest - A Lesson from Benjamin FranklinCrackerjack Greenback. In 1785, French mathematician Charles-Joseph Mathon de la Cour wrote a parody of Benjamin Franklin’s Poor Richard’s Almanack. 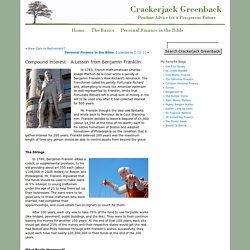 The Frenchman called his parody Fortunate Richard and, attempting to mock the American optimism so well-represented by Franklin, wrote that Fortunate Richard left a small sum of money in his will to be used only after it had collected interest for 500 years. Mr. Franklin thought the idea was fantastic and wrote back to Monsieur de la Cour thanking him. Franklin decided to leave a bequest of £1,000 (about $4,550 at the time of his death) each to his native hometown of Boston and adopted hometown of Philadelphia on the condition that it gather interest for 200 years. Franklin believed 200 years was the maximum length of time any person should be able to control assets from beyond the grave.

The Strings. Is zero an even number? Superstorm Sandy had many consequences, some easier to foresee than others. 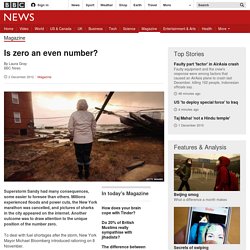 Millions experienced floods and power cuts, the New York marathon was cancelled, and pictures of sharks in the city appeared on the internet. Another outcome was to draw attention to the unique position of the number zero. To deal with fuel shortages after the storm, New York Mayor Michael Bloomberg introduced rationing on 8 November. "Drivers in New York City who have licence plates that end in an odd number or end in a letter or other character will be able to gas or diesel only on odd-numbered days such as tomorrow which happens to be the 9th," he said. "Those with licence plates ending in an even number, or the number zero, will be able to buy gas or diesel only on even number days such as Saturday November 10th. " The use of the phrase "even number, or the number zero" implies that zero is not even. In basketball, shooting angle has a big effect on the chances of scoring. March Madness -- the annual NCAA basketball playoff spectacle in which millions of us, firmly docked in front of the TV screen, consume 1,000 calories an hour while watching young athletes burn 12 calories a minute -- begins in earnest this week. 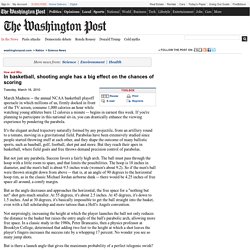 If you're planning to participate in this national sit-in, you can drastically enhance the viewing experience by pondering the parabola. It's the elegant arched trajectory naturally formed by any projectile, from an artillery round to a tomato, moving in a gravitational field. Parabolas have been extensively studied since people started throwing stuff at each other, and they shape the outcome of many ballistic sports, such as baseball, golf, football, shot put and more.