Six Lazy Ways to Trick Your Brain Into Being Productive 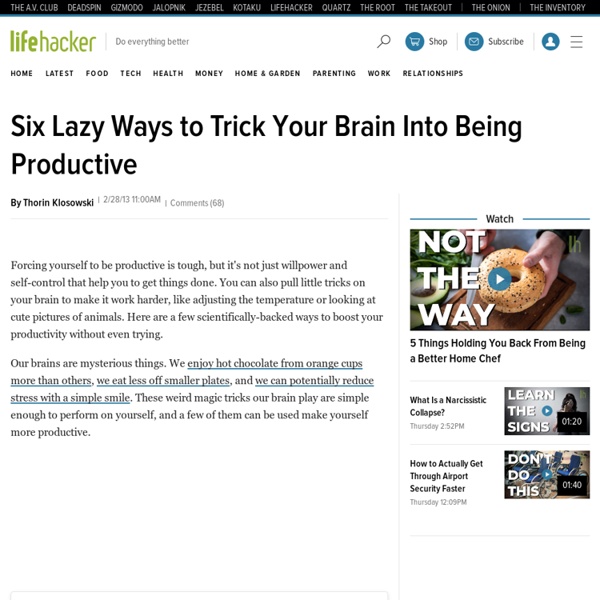 What effect does it have and what kind of people need it? It's an ADD/ADHD medication, often used by HS/College students to help concentration when studying and working long hours on assignments. At first I laughed at this deadpan, "it's funny because it's truuuuuue" joke, being that this is my solution on a nearly daily basis. But on a serious note, because people think Adderall is a magic pill for lazy people that does all your work for you, I have ADHD and people don't realize that it's not just about distractibility...I have really shitty executive functioning, so initiating tasks or switching from one to another is astonishingly difficult. The right dose of the right stimulant (I prefer Vyvanse/Adderall combo), doesn't make a difference only in my ability to focus on the task at hand, but much more so in my ability to go, "Ok, now it is time to start the thing that I want to do right now." That internal voice is subtle, but it's key. Focus on the task is secondary for productivity.

5 Unusual Tricks For Actually Reaching Your New Year's Goals With the new year rolling around, most of us are planning ways to improve our health, set some big goals, and finally achieve things we have been putting off for a while. But when you look at the statistics, almost 80% of people will fail by the springtime, and after a year, only a smaller percentage of people are still involved with their goals at all. So here’s how to be that tiny percentage of people that are still going strong a year later. #1 Follow intrinsic motivation… rather than forcing yourself. Let me ask you this: do you think the typical person who just begins working out during the new year will still be exercising if: They’re intrinsically motivated (they like it)They’re forcing themselves to do it by using rewards (money/food), punishments, etc.

6 Things The Most Productive People Do Every Day Ever feel like you’re just not getting enough done? Know how many days per week you’re actually productive? About 3: People work an average of 45 hours a week; they consider about 17 of those hours to be unproductive (U.S.: 45 hours a week; 16 hours are considered unproductive). We could all be accomplishing a lot more — but then again, none of us wants to be a workaholic either. It’d be great to get tons done and have work/life balance.

Are Your Bacteria Making You Fat? If you reach for that tasty piece of chocolate, even though you are trying to lose weight, are you doing it out of your own volition? Or are you actually being controlled by the bacteria in your gut? This is the question posed in BioEssays by Dr Carlo Maley of the University of California San Francisco. “Bacteria within the gut are manipulative,” said Marley.

The Neuroscience Of "Harry Potter" Let's do a casual experiment. Here's a brief passage from the first book in some obscure fiction series called Harry Potter: A bush on the edge of the clearing quivered. … Then, out of the shadows, a hooded figure came crawling across the ground like some stalking beast. Harry, Malfoy, and Fang stood transfixed. The cloaked figure reached the unicorn, lowered its head over the wound in the animal's side, and began to drink its blood. And here's another passage from the final book of the series:

Setting priorities: the key to effective time management We are living in a time where there are a wide variety of things competing for our attention. Time is our most precious resource but it is limited. It is easy to spend our time responding to the tasks which seem most urgent but this is unlikely to lead to long term fulfilment. Instead we find ourselves moving from one emergency to another. To prevent this, the most fundamental principle in time management is setting priorities i.e. what is most important. Setting priorities allows us to decide which tasks we really need to focus on and which need to be rescheduled, ignored or assigned to someone else.

The Brain-Based Secret to Personal Productivity By now, you've probably already broken most of your New Year's resolutions. You're not alone: Only about 8 percent of those who make them keep them. But it may not be that you'll never lose weight or learn a foreign language. If you aren't being productive or if you feel off track, it could simply be because you haven't set yourself up for success in a way that suits your individuality. Take a typical New Year's resolution like running.

The Daily Routines of Geniuses - HBR Juan Ponce de León spent his life searching for the fountain of youth. I have spent mine searching for the ideal daily routine. But as years of color-coded paper calendars have given way to cloud-based scheduling apps, routine has continued to elude me; each day is a new day, as unpredictable as a ride on a rodeo bull and over seemingly as quickly. Naturally, I was fascinated by the recent book, Daily Rituals: How Artists Work. Author Mason Curry examines the schedules of 161 painters, writers, and composers, as well as philosophers, scientists, and other exceptional thinkers. As I read, I became convinced that for these geniuses, a routine was more than a luxury — it was essential to their work. Bioluminscent trees could light up our streets "When a jellyfish is deep, deep underwater it creates its own light," Roosegaarde tells Dezeen. "It does not have a battery or a solar panel or an energy bill. It does it completely autonomously. What can we learn from that?" Roosegaarde is collaborating with Krichevsky to use a collection of these plants for a large-scale installation designed to look like bioluminescent trees. "I mean, come on, it will be incredibly fascinating to have these energy-neutral but at the same time incredibly poetic landscapes,” he says.

How Music Hijacks Our Perception of Time One evening, some 40 years ago, I got lost in time. I was at a performance of Schubert’s String Quintet in C major. During the second movement I had the unnerving feeling that time was literally grinding to a halt. 10 Ways To De-Clutter, Simplify, and Streamline Your Life So you know you need to get organized, but don’t know where to start. You may lose things, purchase a new thing, and find that thing (you thought) you lost one week later. You’ve read something about Minimalism, but aren’t sure how it applies to you. You know you’re not ready to get down to 100 possessions, ditch your car, or work only from remote locations. Sound familiar?

10 Laws of Productivity You might think that creatives as diverse as Internet entrepreneur Jack Dorsey, industrial design firm Studio 7.5, and bestselling Japanese novelist Haruki Murakami would have little in common. In fact, the tenets that guide how they – and exceptionally productive creatives across the board – make ideas happen are incredibly similar. Here are 10 laws of productivity we’ve consistently observed among serial idea executors: 1. Break the seal of hesitation. A bias toward action is the most common trait we’ve found across the hundreds of creative professionals and entrepreneurs we’ve interviewed.

Related:
Related:  Productivity Strategies   -  Self Improvement   -  biohack   -  Smart Kids   -  Productivity   -  Tackle Any Issue With a List of 100 - Litemind   -  100 Ways To Live A Better Life - Dragos Roua   -  Scott H Young – Blog   -  Welcome to Test yourself?   -  Handbook for Life: 52 Tips for Happiness and Productivity   -  11 Goal Hacks: How to Achieve Anything — PsyBlog   -  20 Incredible Web Apps Found in the Chrome Web Store   -  7 Not So Obvious Habits To Maximize Your Productivity   -  Summer Fun Links - The Idea Room   -  100+ Free Tools For You To Access Blocked Sites   -  Mind Your En And Em Dashes: Typographic Etiquette | Smashing Magazine   -  Practicing Simplified GTD   -  Obsessive- Compulsive’s Guide: Top 12 Organizing Tips, Plus Resources : zenhabits   -  25 Killer Actions to Boost Your Self-Confidence   -  Popular - Top All Time   -  Sign up for a free account   -  Man-approved Spicy Oven Fries | MNN - Mother Nature Network   -  Michio Kaku | Professor of Theoretical Physics, CUNY | Big Think   -  50 Free Apps We're Most Thankful For   -  Pretentious Title: How I Went From Writing 2,000 Words a Day to 10,000 Words a Day   -  Online Meetings & Webinar Software - Fast & Free with MeetingBurner   -  How To Organize Your Files - Organize With Sandy : Organize With Sandy   -  GuideGuide   -  Developing self discipline   -  Create Your Own Smartphone App With Infinite Monkeys - No Coding Knowledge Required   -  Problem loading page   -  Five Best Productivity Methods   -  Habits: How They Form And How To Break Them : NPR   -  How To Create A Habit In 15 Days | Dragos Roua   -  Skitch - Snap. Mark up. Send.   -  How to Train Your Brain and Boost Your Memory Like a USA Memory Champion   -  Microsoft OneNote: Save Ideas and Organize Notes - Apps on Google Play   -  Customer Support Software & Ticketing System | Freshdesk   -  35 Great iPad Apps for Designers, Geeks and Creative Individuals - Creative CanCreative Can   -  Slice - Track Your Stuff (Packages, Purchases, Price Drops)   -  How to Use Text Expansion to Save Yourself Hours of Typing Every Week   -  Springpad: Everyday life, done better