The Beginner's Guide to Tumblr 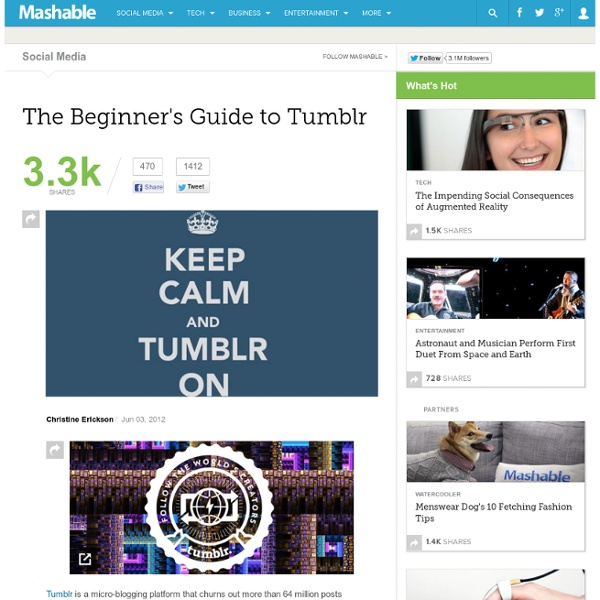 Tumblr is a micro-blogging platform that churns out millions of posts on a daily basis. There are currently 108.6 million blogs on Tumblr, which might seem intimidating to anyone not already using it. Tumblr could be useful to you for many reasons, depending on what you're looking to get out of it, for example, inspiration, scrapbooking, communication or a portfolio. The site is a mix of bloggers, brands and tastemakers. Depending on how you want to utilize the platform, this guide will help you move from a Tumblr novice to power blogger. 1. Tumblr registration is simple: You only need an email address, password and username. With Tumblr, you can change your URL later, so if you absolutely hate it down the road, that can be fixed — but keep in mind that change will affect SEO. Be sure to upload a default image, too, to complete your profile. 2. Once you have an account, there are a number of following options, depending on how you want to utilize the site. 3. 4. 5. 6. 7. Related:  boîte à outils • Social Networks: Generic Reading Material • Strategies

The Beginner's Guide to Instagram Update: This post was updated November 2013 to reflect current statistics and tools. Even if you don't use Instagram, we're guessing you've encountered an Instagram image somewhere on the web — even if you didn't realize it. Instagram's calling card is the photo filter, a digital layer that, when added to a standard photo, gives it the appearance of professional editing. Some filters enhance the colors in a photo, while other dull the light to a soft glow for an aged, vintage appearance. But while Instagram's filters revolutionized mobile photo editing, they're only a portion of the appeal. Its success caught the eye of the most valuable social network in the world. Instagram has surely come a long way, business-wise, since co-founders Kevin Systrom and Mike Krieger introduced the app in 2010. We're here to share the Instagram basics, whether you're new to the network or need some additional tips. We'd love to learn about your Instagram experiences. 1. 2. 3. 4. 5. 6. 7. 8. 9. 10. 11.

US Military Scientists Solve the Fundamental Problem of Viral Marketing Viral messages begin life by infecting a few individuals and then start to spread across a network. The most infectious end up contaminating more or less everybody. Just how and why this happens is the subject of much study and debate. It is this seed group that fascinates everybody from marketers wanting to sell Viagra to epidemiologists wanting to study the spread of HIV. So a way of finding seed groups in a given social network would surely be a useful trick, not to mention a valuable one. These guys have found a way to identify a seed group that, when infected, can spread a message across an entire network. Their method is relatively straightforward. Having determined the threshold, these guys examine the network and look for all those individuals who have more friends than this critical number. In the next, step, they repeat this process, looking for all those with more friends than the critical threshold and pruning those with the greatest excess. And the algorithm works well.

5 ways Google Analytics can help you to "growth hack" your business To get the best out of this amazing platform and to increase your online (and offline) sales and goals, you need to know what you’re doing. If used well, Google Analytics can allow for some strong “growth hacking” for your company. Growth hacking is about leveraging user behaviour and data through testing and adapting your product to give users what they want and need, therefore resulting in online growth. By harnessing the powers of Google Analytics, and really understanding what information to pull from it, and what that information means, you could apply your learnings to your strategies to increase the growth rate of your business. So if you want to you “growth hack” your business and then you need to take advantage of the capabilities of Google Analytics and to significantly grow your online revenue then here are the five most important ‘must haves’. 1. Do you know how many users are coming from Mobile traffic (smart phones, tablets, Kindle, wearables, etc.)? 2. 3. 4. 5.

Jitsi (SIP Communicator) | Main / HomePage Jitsi (formerly SIP Communicator) is an audio/video and chat communicator that supports protocols such as SIP, XMPP/Jabber, AIM/ICQ, Windows Live, Yahoo! and many other useful features. Jitsi is Open Source / Free Software, and is available under the terms of the LGPL. JetBrains have just contributed free WebStorm licenses to the entire Jitsi team to help with our work on Jitsi Meet. Thanks JetBrains! Jitsi Videobridge and JitMeet at the VoIP Users Conference Jitsi made a guest appearance at VoIP Users Conferemce episode 482 this Friday. Three more days to apply for Jitsi’s GSoC! The GSoC application deadline is this Friday (March 21). The advice first appeared on planet.ubuntu.com which was relaying Daniel Pocock’s post. Jitsi in Google Summer of Code 2014! We are happy to announce that Jitsi is taking part in Google Summer of Code 2014 ! Our JitMeet talk at FOSDEM Learn about Jitsi Videobridge and JitMeet at BlogGeek Open Hangouts with WebRTC, Jitsi Videobridge and COLIBRI

Instagram And Snapchat Becoming More Popular Among Kids, Facebook Considered Less 'Cool' WASHINGTON — After Friendster came MySpace. By the time Facebook dominated social media, parents had joined the party, too. But the online scene has changed - dramatically, as it turns out - and these days even if you're friends with your own kids on Facebook, it doesn't mean you know what they're doing. Thousands of software programs now offer cool new ways to chat and swap pictures. The most popular apps turn a hum-drum snapshot into artistic photography or broadcast your location to friends in case they want to meet you. Parents who want to keep up with the curve should stop thinking in terms of imposing time limits or banning social media services, which are stopgap measures. "What sex education used to be, it's now the `technology talk' we have to have with our kids," said Rebecca Levey, a mother of 10-year-old twin daughters who runs a tween video review site called KidzVuz.com and blogs about technology and educations issues. There are general security concerns, too. Rep.

Social Media Demographics – Instagram, Tumblr, and Pinterest - Agile Impact Instagram, Tumblr and Pinterest are very popular social networks. All 3 are image based, and while they are used by thousands of people every day, they can be ineffective if you’re not targeting the right demographic. Unlike Twitter and Facebook, demographics for these 3 sites are a bit more specific. Instagram Instagram is probably the most diverse social network out of the three. Some 20% of female cell phone users aged 18 and up use the app, compared to 16% of males. 43% of 18-29-year-old cell phone users report using Instagram. While Instagram’s main users are definitely teens and young adults, 18% of cell phone users ages 30-49 said they also use Instagram. Instagram Stats: Among Instagram users, 24% say they use it several times a day.There are 150 million active users.There are 1.2 billion likes daily and an average of 55 million photos posted per day. Tumblr Tumblr may not be the most popular social network, but the users that are on Tumblr are very dedicated to the site. Pinterest

7 Networking Tips From The Most Successful Super Connector Ilya Pozin is an entrepreneur, writer and investor. He is the founder of Open Me a social greeting card company, and Ciplex, a digital marketing agency. “It’s not about what you know — it’s about who you know.” Chances are you’ve heard this phrase before. But is it really true? A new class of entrepreneurial super connectors are proving it to be. Super connectors are people with more than just a strong social media followings and lots of friends. While others may be able to introduce you to an acquaintance, these connectors are making the smart, right introductions that actually lead to real results for everyone involved. To find out their secrets, I spoke to some of the most influential super connectors impacting industries worldwide. 1. “Running a successful business is all about who you know, but who you know is not enough,” said entrepreneur and blogger Lewis Howes. 2. 3. It isn’t about you. 4. Pay things forward, he urges. 5. “Super connectors usually lack time,” Rifkin notes. 6. 7.

What World Are We Building? "What World Are We Building?" danah boyd 2015 Everett C Parker Lecture: October 20, 2015 This talk was written for the 2015 Everett C Parker Lecture, in honor of his amazing work. Being able to give this lecture is an honor, but it is also deeply humbling in light of his amazing work. Citation: boyd, danah. 2015. I am both honored and humbled to be with you today. I’m here today to talk with you about battles underway around new internet-based technologies. I grew up in a small town in Pennsylvania, where I struggled to fit in. I studied computer science, wanting to build systems that connected people and broke down societal barriers. In the late 90s, the hype around the internet became bubbalicious and it was painfully clear that economic agendas could shape technology in powerful ways. In the early days of social network sites, it was exhilarating watching people understand that they were part of a large global network. Let’s talk youth for a second. Let’s now shift focus. Dr. Thank you!

Marketers First Virtual Event: Expert Advice to Help You Meet Your Company’s Marketing Objectives The last fiscal quarter of the year is upon us, and there is no better time to start planning for the year ahead. Marketo’s massive online marketing conference aims to equip professionals in the field with all the tools they need to create the perfect marketing plan. Register Now Join Marketo’s Marketers First Virtual Event to get access to over 20 sessions with marketing experts. How to align department goals with organizational goals, and focus on impact goals (more revenue) vs activity goals (more likes)Why clear leadership and established processes are essential for social workflowThe business benefits of unifying your social strategy across Marketing, Sales, Customer Service, HR & IT— and how to do it Event Details When: September 10th, 2014 Time:8:30am-12:00pm PT About the speaker: Jeanette GibsonVP Community and Customer Experience, Hootsuite Plan out the conversation with your leadership around this year’s marketing objectives.