How to Conduct Scientific Research On the Internet (Without Getting Duped) 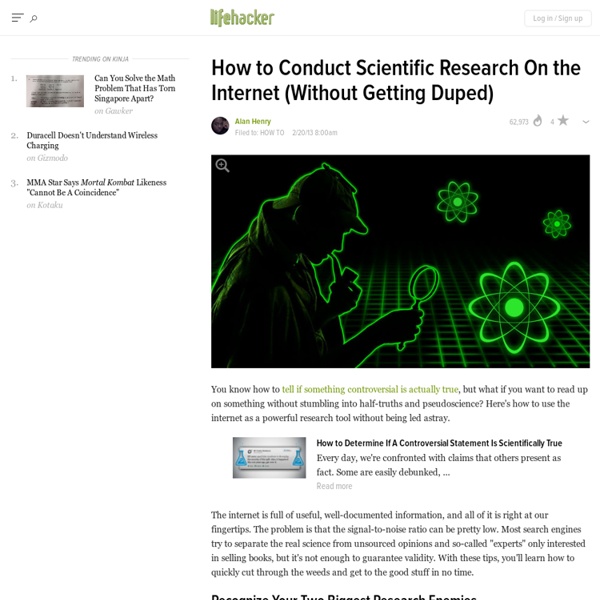 As We May Think - Vannevar Bush As Director of the Office of Scientific Research and Development, Dr. Vannevar Bush has coordinated the activities of some six thousand leading American scientists in the application of science to warfare. In this significant article he holds up an incentive for scientists when the fighting has ceased. He urges that men of science should then turn to the massive task of making more accessible our bewildering store of knowledge. For years inventions have extended man's physical powers rather than the powers of his mind. This has not been a scientist's war; it has been a war in which all have had a part. For the biologists, and particularly for the medical scientists, there can be little indecision, for their war has hardly required them to leave the old paths. It is the physicists who have been thrown most violently off stride, who have left academic pursuits for the making of strange destructive gadgets, who have had to devise new methods for their unanticipated assignments.

To Know, but Not Understand: David Weinberger on Science and Big Data - David Weinberger In an edited excerpt from his new book, Too Big to Know, David Weinberger explains how the massive amounts of data necessary to deal with complex phenomena exceed any single brain's ability to grasp, yet networked science rolls on. Thomas Jefferson and George Washington recorded daily weather observations, but they didn't record them hourly or by the minute. Not only did they have other things to do, such data didn't seem useful. How will we ever make sense of scientific topics that are too big to know? This would not be the first time. In this excerpt from my new book, Too Big To Know, we'll look at a key property of the networking of knowledge: hugeness. In 1963, Bernard K. If science looked like a chaotic brickyard in 1963, Dr. Indeed, networked fact-based brickyards are a growth industry. There are three basic reasons scientific data has increased to the point that the brickyard metaphor now looks 19th century. Second, the economics of sharing have changed. Dr. Images: 1-3.

Science publishing: The paper is not sacred Two months after we started a blog that tracks scientific retractions — Retraction Watch — in 2010, one of us (A.M.) told The New York Times that we weren't sure we would have enough material to post with any regularity. That concern turned out to be unfounded — in just 16 months, we have written about some 250 retractions. Little did we know that, in scientific publishing, 2011 would become the Year of the Retraction. Here's what grabbed everyone's attention: retractions have increased 15-fold over the past decade, while the number of papers has risen by less than 50% (see Nature 478, 26–28; 2011). It is not clear why, and it is always dangerous to draw too many conclusions from what is a relatively rare occurrence — some 300 retractions among 1.4 million papers published annually. About 90 retractions, after all, have come from one author, Joachim Boldt, a German anaesthesiologist, largely because he failed to obtain the appropriate approvals for his research. Too laissez-faire?

Infographic: How to read a scientific paper Mastering this skill can help you excel at research, peer review – and writing your own papers By Natalia Rodriguez Posted on 5 August 2015 Natalia Rodriquez is Communications Coordinator at Research4Life. Much of a scientist’s work involves reading research papers, whether it’s to stay up to date in their field, advance their scientific understanding, review manuscripts, or gather information for a project proposal or grant application. Research papers follow the well-known IMRD format — an abstract followed by the Introduction, Methods, Results and Discussion. Reading a scientific paper should not be done in a linear way (from beginning to end); instead, it should be done strategically and with a critical mindset, questioning your understanding and the findings. Here are some tips for reading and understanding research papers. References Lenny Rhine. Related resources Research4Life Training Portal: A platform with free downloadable resources for researchers. Elsevier Connect Contributor

psychology_study_that_induced_the_reproducibility_crisis_was_wrong Craig Barritt/Getty Images for Cosmopolitan magazine and WME Live Remember that study that found that most psychology studies were wrong? Yeah, that study was wrong. That’s the conclusion of four researchers who recently interrogated the methods of that study, which itself interrogated the methods of 100 psychology studies to find that very few could be replicated. (Whoa.) Rachel E. In case you missed the hullabaloo: A key feature of the scientific method is that scientific results should be reproducible—that is, if you run an experiment again, you should get the same results. That meta-analysis, published in Science by a group called the Open Science Collaboration, led to mass hand-wringing over the “replicability crisis” in psychology. Now this new commentary, from Harvard’s Gary King and Daniel Gilbert and the University of Virginia’s Timothy Wilson, finds that the OSC study was bogus—for a dazzling array of reasons.

The danger of science denial - Michael Specter Measles is a highly contagious respiratory disease caused by a virus. Autism is a neurodevelopmental disorder characterized by social impairments, cognitive impairments, communication difficulties, and repetitive behaviors. The Chernobyl disaster was a catastrophic nuclear accident that occurred on April 26, 1986 at the Chernobyl Nuclear Power Plant in Ukraine. Michael Specter has been a staff writer at The New Yorker since 1998 and is the author of Denialism, about how irrational thinking hinders scientific progress, harms the planet, and threatens our lives. Jonas Salk was an American medical researcher and virologist, best known for his discovery and development of the first successful polio vaccine. Paul Offit is an American pediatrician specializing in infectious diseases and an expert on vaccines, immunology, and virology. Genetically modified foods are foods derived from genetically modified crops.

A Cambridge professor on how to stop being so easily manipulated by misleading statistics “There are three kinds of lies: Lies, damned lies, and statistics.” Few people know the struggle of correcting such lies better than David Spiegelhalter. Since 2007, he has been the Winton professor for the public understanding of risk (though he prefers “statistics” to “risk”) at the University of Cambridge. In a sunlit hotel room in Washington DC, Quartz caught up with Spiegelhalter recently to talk about his unique job. When he isn’t fixing people’s misunderstandings of numbers, he works to communicate numbers better so that misunderstandings can be avoided from the beginning. Quartz: You have one of the most unique jobs in the world. Spiegelhalter: Most of the time I’m working on quantitative and qualitative evidence. In terms of research, my work is mostly collaborative, working with psychologists, mathematicians, and others who are trying to find ways to communicate risk. What’s a recent example of misrepresentation of statistics that drove you bonkers? There are. But maybe not.

Who's downloading pirated papers? Everyone | Science | AAAS Just as spring arrived last month in Iran, Meysam Rahimi sat down at his university computer and immediately ran into a problem: how to get the scientific papers he needed. He had to write up a research proposal for his engineering Ph.D. at Amirkabir University of Technology in Tehran. His project straddles both operations management and behavioral economics, so Rahimi had a lot of ground to cover. But every time he found the abstract of a relevant paper, he hit a paywall. Related content: The frustrated science student behind Sci-Hub Alexandra Elbakyan founded Sci-Hub to thwart journal paywalls My love-hate of Sci-Hub Editorial by Marcia McNutt, Editor-in-Chief, Science suite of journals It's a Sci-Hub world data set Data set and details on Sci-Hub server He looked at his list of abstracts and did the math. Many academic publishers offer programs to help researchers in poor countries access papers, but only one, called Share Link, seemed relevant to the papers that Rahimi sought. 1.

Scientific Literacy Scientific literacy is the knowledge and understanding of scientific concepts and processes required for personal decision making, participation in civic and cultural affairs, and economic productivity. It also includes specific types of abilities. In the National Science Education Standards, the content standards define scientific literacy. Scientific literacy means that a person can ask, find, or determine answers to questions derived from curiosity about everyday experiences. It means that a person has the ability to describe, explain, and predict natural phenomena. Scientific literacy entails being able to read with understanding articles about science in the popular press and to engage in social conversation about the validity of the conclusions.