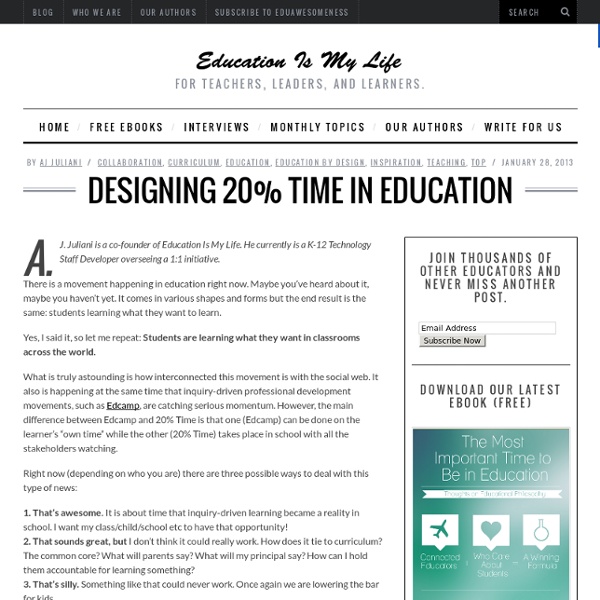 A.J. Juliani is a co-founder of Education Is My Life. He currently is a K-12 Technology Staff Developer overseeing a 1:1 initiative. There is a movement happening in education right now. Yes, I said it, so let me repeat: Students are learning what they want in classrooms across the world. What is truly astounding is how interconnected this movement is with the social web. Right now (depending on who you are) there are three possible ways to deal with this type of news: 1. I’ve heard all three “viewpoints” since writing “20% Time (like Google) In My Class” last January. This article is meant to address the three points-of-view above. If you are a #1 above, this will give you the resources and connections to get started today. If you are a #2 above, this will explain how I currently have three teachers in my high school doing the project. If you are a #3 above, this will explain the research and methodology behind 20% Time in education. The “This is Awesome” Group 1. 2. 3. 4. 5. 1.

20-Time In Education Inspire. Create. Innovate. Bentley Ad Shot Using iPhone 5s, Assembled on iPad Air Bentley's newest ad, Intelligent Details, was filmed entirely with Apple's mobile devices. Photographers used the iPhone 5s to shoot video and then put it together using an iPad Air, according to details provided on the making of the ad at the end of the spot (via The Loop). Shot in New York, a quick behind the scenes look at the black and white film on the $300,000 Bentley Mulsanne reveals that it was filmed with an iPhone 5s, using specialized lenses, mounts, and cases to produce high-quality video on par with far more expensive camera equipment. The short video was then assembled using an iPad Air and the iMovie app with an attached custom keyboard case. Bentley's ad is the newest spot to be filmed using Apple tools, but it's far from the first. Searching for Sugar Man, a documentary that won an Academy Award back in February of 2013, was also partially shot using an iPhone.

Give your students 20% time to do whatever they want | I teach. I think. "Seriously? You're going to let us do whatever we want for 20% of our time in English class?" "I'm skeptical." "That's awesome." Taking Google's lead, and inspired by Dan Pink's book, Drive, I decided to take the plunge and give my students the kind of radical autonomy they both suggest, and I gave my students 20% of their time in my English class to pursue a project of their choosing. Rules and expectations Project ideas build a tutoring network of high school students helping middle school studentsdesign a complex videogame map using Valve's SDKstart a business selling originally designed t-shirts and accessorieslaunch a web-design start-up for local organizations and businesseswrite a graphic novelmake a stop-motion animated movie of a scene from Macbethwrite a backpacking guide for teenage girlsinterview local senior citizens and document their historyrecord and produce a full-length album Failure is an option Here is a video of clips from their final 20% talks. My own successful failures

#BBCtrending: Tunisia’s rubbish selfie trend 27 May 2014Last updated at 14:04 ET BBC Trending What's popular and why The Genius Hour Design Cycle: A Process For Planning - 3. Some students need a push in the right direction Some students will come up with projects that are too simple with answers that could be easily Googled. We introduced the students to ‘High Order Thinking Skills’ and built these into the planning forms students complete. 4. A student might have a passion for surfing and decide they are going to write a book about the history of the sport. 5. It can be hard to say no to a project but some are just not feasible. 6. Some projects will clearly take longer than you have available, others are simply too large in scale or will rely on the involvement of too many people. Creating a detailed timeline with estimates of how long each phase will take is beneficial on many levels at this stage. 7. One of the challenges for some students has been the ever changing project. 8. Over the years we refined the level of planning the students were required to do before commencing on their projects in earnest. 9. 10. 11. 12. 13.

The Antidote to Apathy – From Indifference to Making a Difference | Cruxcatalyst: The Heart of Change One of the perennial questions for change agents is how to get people engaged. Often, it seems, people just don’t seem to care, or are unable to see either a self or collective interest in becoming active participants in change. In ‘The Antidote to Apathy’, Dave Meslin talks about how what is considered apathy, selfishness or laziness is in fact the result of actively discouraging engagement by creating obstacles and barriers to participation and involvement. He gives the example of how we treat changes to things like zoning applications which may be of great interest to a local community – yet they are announced in obscurely-located notices written in bureau-speak. To highlight the absurdity of what we’ve come to regard as ‘normal’, he contrasts this with what it would look like if the private sector took the same approach: Imagine if Nike wanted to sell a pair of shoes and put an ad in the paper like that: Knowledge/Skills The Wikipedia definition of apathy describes it as: Time Convenience

Gallery: Life on Chicago’s South Side Photographer Jon Lowenstein loves Chicago. He’s originally from Boston, but his affair with the city started with a real-life relationship: Years ago, he dated a woman from the city’s South Side and spent a lot of time exploring the community. Now Lowenstein, a TED Fellow and member of the NOOR photography collective, lives in the neighborhood himself, and is making it his mission to spread awareness about what’s going on there. Predominantly African-American, the South Side is home to nearly a million people, and it’s historically been known as a poor part of town. But as wealthier people move into Chicago, longtime South Siders are being priced or pushed out of their homes. As has happened elsewhere, gentrification has led to more violence, particularly among gangs. In the past year, Lowenstein has increased his efforts to reach a larger audience by posting black-and-white reportage photographs of the city on his Instagram account. Another shot from the same anti-violence rally.

I'm Taking a Break From University... And I Haven't Even Started | Patrick Mott The time I have been dreaming about since kindergarten was finally approaching. University seemed like a distant eternity from the confines of elementary and high school. Suddenly, everything began to happen so quickly -- prom, final exams, graduation. Everything was in order. My iPhone woke me up with screeching sound of my alarm on August 19. Last year, in June 2013, as I procrastinated studying on the eve of my grade 11 math exam, I tweeted that it was my summer goal to have lunch with Arlene Dickinson. A year later, I walked into Le Select Bistro on Wellington Street in Toronto. We then began talking about how I was only a two weeks away from beginning to pursue a Bachelor of Arts in Professional Communication at Ryerson University. Conversing with Arlene, I began to realize that I was going to university because it was the normal thing to do; it was what all my friends were doing. Having over 30,000 followers on Twitter means that I'm exposed to my fair share of "haters."

Crowd-funded Lego car powered by air 19 December 2013Last updated at 11:06 ET By Jane Wakefield Technology reporter A car made from Lego blocks and powered by compressed air An air-powered car built of Lego, that can reach a top speed of around 20km/h (12mph) has hit the roads of Melbourne. It was built by an Australian entrepreneur and a Romanian technologist who used more than 500,000 pieces of Lego to complete the car. The crowd-funded project began with a tweet asking people to invest in an "awesome" start-up. Four air-powered engines and 256 pistons, all built of Lego bricks, enable the car to move. Everything bar the wheels is made from Lego. The creators were worried about a large Lego explosion Co-founder Steve Sammartino told the BBC that he was "neither a car enthusiast nor a Lego enthusiast". "What I am is a technology enthusiast and I wanted to show what is possible when you crowd-fund an idea and use young talented people," he said. The engine is powered by air Continue reading the main story “Start Quote

Alan Watts - What do you desire? Buy Pure Genius - Innovation in the Classroom - Don Wettrick