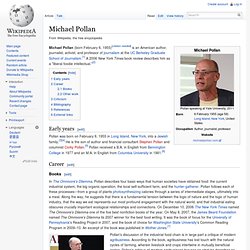 "[2] Early years[edit] Pollan was born on February 6, 1955 in Long Island, New York, into a Jewish family.[3][4] He is the son of author and financial consultant Stephen Pollan and columnist Corky Pollan.[5] Pollan received a B.A. in English from Bennington College in 1977 and an M.A. in English from Columbia University in 1981.[6] Career[edit] Books[edit] Food Hero: Janie Simms Hipp, Founder of the Indigenous Food and Agriculture Initiative. Janie Simms Hipp (Chickasaw Nation) recently left an interesting career as a Senior Advisor for Tribal Affairs at the U.S. 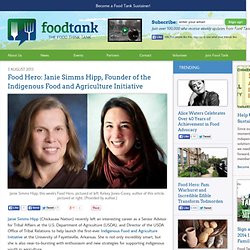 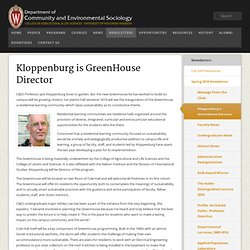 But the new GreenHouse he has worked to build on campus will be growing citizens, not plants! Fall semester 2010 will see the inauguration of the GreenHouse, a residential learning community which takes sustainability as its constitutive theme. Residential learning communities are residence halls organized around the provision of diverse, integrated, curricular and extracurricular educational opportunities for the students who live there. Anim Steel. Joel Salatin. Salatin giving a tour of his farm Joel F. Right Livelihood Award: 1988 - José Lutzenberger. "...for his contribution to protecting the natural environment in Brazil and worldwide. 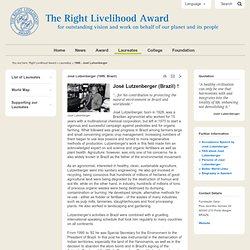 " José Lutzenberger, born in 1926, was a Brazilian agronomist who worked for 15 years with a multinational chemical corporation, but left in 1970 to start a vigorous and successful campaign against pesticides and for organic farming. What followed was great progress in Brazil among farmers large and small concerning organic crop management; increasing numbers of them began to use less poisons and turned to more regenerative methods of production. Lutzenberger's work in this field made him an acknowledged expert on soil science and organic fertilisers as well as plant health. Agriculture, however, was only one of his concerns: he is also widely known in Brazil as the father of the environmental movement. As an agronomist, interested in healthy, clean, sustainable agriculture, Lutzenberger went into sanitary engineering. Lutzenberger passed away in 2002 at the age of 75. 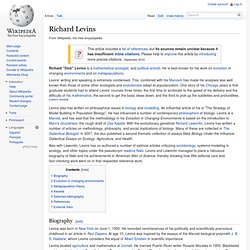 He is best known for his work on evolution in changing environments and on metapopulations. Levins' writing and speaking is extremely condensed. This, combined with his Marxism has made his analyses less well known than those of some other ecologists and evolutionists adept at popularization. One story of his Chicago years is that graduate students had to attend Levins' courses three times: the first time to acclimate to the speed of his delivery and the difficulty of his mathematics; the second to get the basic ideas down; and the third to pick up the subtleties and profundities. Pubs.iied.org/pdfs/14506IIED.pdf. Small Planet Institute. Frances Moore Lappé is the author or co-author of 18 books including the three-million copy Diet for a Small Planet. 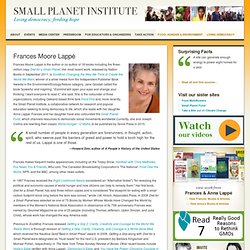 Her most recent work, released by Nation Books in September 2011, is EcoMind: Changing the Way We Think to Create the World We Want, winner of a silver medal from the Independent Publisher Book Awards in the Environment/Ecology/Nature category. Jane Goodall called the book "powerful and inspiring. "Ecomind will open your eyes and change your thinking. I want everyone to read it," she said. She is the cofounder of three organizations, including Oakland based think tank Food First and, more recently, the Small Planet Institute, a collaborative network for research and popular education seeking to bring democracy to life, which she leads with her daughter Anna Lappé. Reconnecting Farmers, Society and the Earth  Vandana Shiva: The Future of Food-Part 1. About Marion Nestle. Marion Nestle is Paulette Goddard Professor in the Department of Nutrition, Food Studies, and Public Health (the department she chaired from 1988-2003) and Professor of Sociology at New York University. 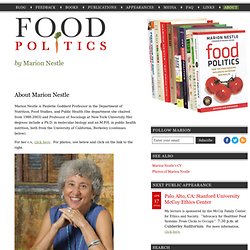 Her degrees include a Ph.D. in molecular biology and an M.P.H. in public health nutrition, both from the University of California, Berkeley (continues below). For her c.v., click here. For photos, see below and click on the link to the right. Her first faculty position was in the Department of Biology at Brandeis University. From 1976-86 she was Associate Dean of the University of California San Francisco (UCSF) School of Medicine, where she taught nutrition to medical students, residents, and practicing physicians, and directed a nutrition education center sponsored by the American Cancer Society. 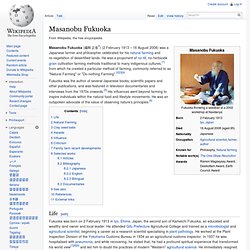 (2 February 1913 – 16 August 2008) was a Japanese farmer and philosopher celebrated for his natural farming and re-vegetation of desertified lands. He was a proponent of no-till, no-herbicide grain cultivation farming methods traditional to many indigenous cultures,[1] from which he created a particular method of farming, commonly referred to as "Natural Farming" or "Do-nothing Farming".[2][3][4] Fukuoka was the author of several Japanese books, scientific papers and other publications, and was featured in television documentaries and interviews from the 1970s onwards.[5] His influences went beyond farming to inspire individuals within the natural food and lifestyle movements.