Stella McCartney: Change Agent. LONDON, United Kingdom — In a nondescript building tucked away on a quiet street in West London, Stella McCartney and her team are comparing the properties of a real leather shoe to the various non-leather swatches being considered for her brand’s Winter 2015 shoe collection. 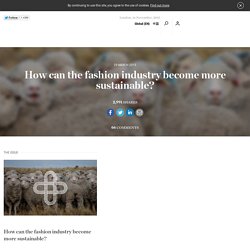 McCartney is wearing a cream blouse, open at the neck, with faded blue jeans and non-leather boots. Pinned up against the wall are boards labeled: “Heels,” “Mules,” and “Cutouts.” 3 Fashion-Forward, Totally Green Companies You Can Support Now. When it comes to making conscious decisions for the sake of a better earth (and the subsequent health of all its inhabitants, from the trees to animals to human beings), some companies do a little green-washing (i.e. slapping some trees on their product labels or splashing some green in their signage) — and, then, some companies really get it right. 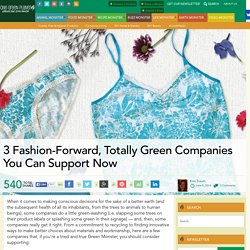 From a commitment to recycling to finding innovative ways to make better choices about materials and workmanship, here are a few companies that, if you’re a tried and true Green Monster, you should consider supporting: 1. The People’s Movement It goes without saying that the shoe and clothing industry is huge — billions of dollars a year huge. Dirt To Shirt: Mindful Supply Co. Stitches Stories Into Each Clothing Piece. How often can you email the farmer that grew the cotton that created the T-shirt that you're wearing? 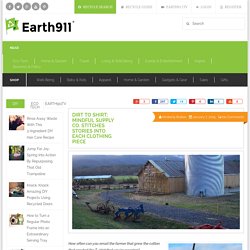 Seriously, how remarkable is the fact that you can contact every single supplier and grower in the lifecycle of your apparel? It is extremely rare, but it's just the way that business is done at Mindful Supply Co. in Greensboro, North Carolina. 'Forgotten NC' Located in the heart of North Carolina's textile production area, where American jobs are rapidly disappearing due to outsourcing to foreign countries, Mindful Supply Co. is unabashedly proud of how their clothing is entirely grown and made in the U.S.A. David Grubbs and Derek Glass started the company in 2012, after seeing so many jobs leave the country, devastating families that were left in the area.

Mindfulness and Climate Action. An Initiative of One Earth Sangha, Buddhist Teachers Collaborative for Climate Action, and Conversations That Change The World from Maestro Conference We invite you to join a conversation as we explore the impact of climate change, its underlying causes, and how Dharma practice can inform our personal and collective response. 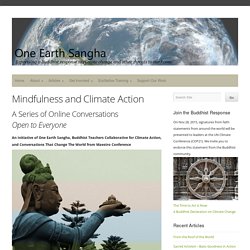 Climate change, the greatest crisis of our civilization, threatens a sustainable environment that can support life on Earth. We have a short window of opportunity to shift this unprecedented challenge into a radically new way of being and living. 1 Billion Buddhists Urge For Action On Climate Change. Buddhist Leaders Unite Fifteen of the world’s most senior Buddhists have issued a landmark call to political leaders to adopt an effective climate change agreement at the UN negotiations in Paris starting 30 November. 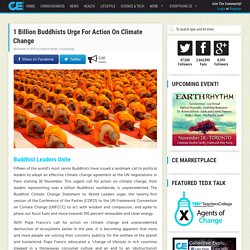 This urgent call for action on climate change, from leaders representing over a billion Buddhists worldwide, is unprecedented. The Buddhist Climate Change Statement to World Leaders urges the twenty-first session of the Conference of the Parties (COP21) to the UN Framework Convention on Climate Change (UNFCCC) to act with wisdom and compassion, and agree to phase out fossil fuels and move towards 100 percent renewable and clean energy.

Eco Buddhism: Mindfulness and Environmental Justice. Environmental philosophies are capable of generating major shifts in the relationship we have with the environment (De Silva, 1998). 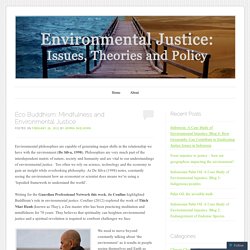 Philosophies are very much part of the interdependent matrix of nature, society and humanity and are vital to our understandings of environmental justice. Too often we rely on science, technology and the economy to gain an insight while overlooking philosophy. As De Silva (1998) notes, constantly seeing the environment how an economist or scientist does means we’re using a ‘lopsided framework to understand the world’. Writing for the Guardian Professional Network this week, Jo Confino highlighted Buddhism’s role in environmental justice. Confino (2012) explored the work of Thich Nhat Hanh (known as Thay), a Zen master who has been practicing meditation and mindfulness for 70 years. Beyond environment: falling back in love with Mother Earth. Zen master Thich Nhat Hanh has been practising meditation and mindfulness for 70 years and radiates an extraordinary sense of calm and peace. 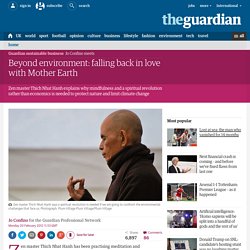 This is a man who on a fundamental level walks his talk, and whom Buddhists revere as a Bodhisattva; seeking the highest level of being in order to help others. Ever since being caught up in the horrors of the Vietnam war, the 86-year-old monk has committed his life to reconciling conflict and in 1967 Martin Luther King nominated him for the Nobel Peace Prize, saying "his ideas for peace, if applied, would build a monument to ecumenism, to world brotherhood, to humanity. " So it seems only natural that in recent years he has turned his attention towards not only addressing peoples' disharmonious relationships with each other, but also with the planet on which all our lives depend. 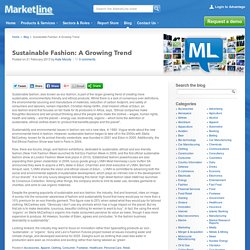